Why We Love the Crap We Make, or The Grand Unifying Theory of Regretsy 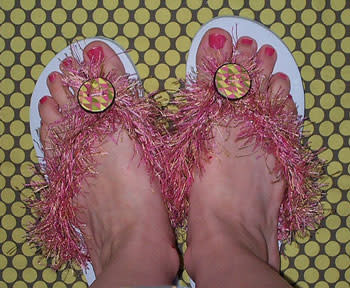 Your grandma's day-glo knitted sweaters are proof: People love the stuff they make, even when what they make is a disaster. It's a weird little corner of human psychology studied by behavioral economist Michael Norton

, who dubs it the IKEA phenomenon, having observed in his own studies that people love the IKEA boxes they assembled themselves more than the identical IKEA boxes assembled by some other dude, and that people consider their wretched origami animals valuable works of art while others call them "nearly worthless crumpled paper

." He speculates that it may be the pride of accomplishment that makes people behave this way, or some warped sense that anything that took more work to make is inherently better. But anyone who's wasted a perfectly good Saturday working on a BEKVÄM

can tell you that it ain't love or pride that keeps you from throwing that thing out the window---it's the fear of having to do it all over again. No, forget IKEA: a better name for this quirk of the mind is the Regretsy

is an online marketplace for people selling handmade objects; Regretsy

.In the (rather polite) New Scientist article covering this research

, Laura Spinney shows she is wise to this alternate formulation:

Something similar may also help to explain why in many spheres we are seeing a return to the cult of the artisan. These days there are websites where you can pay more to do more, from mixing your own muesli to designing your own T-shirt...Schreier's lab experiments have shown that people are willing to pay twice as much for a product they have customised than for an identical, off-the-peg one---and the perceived increase in value is attributable in roughly equal parts to preference fit and effort investment.

A similar sentiment is expressed by Kelly Herd

, a professor of marketing interviewed by Spinney: "People create pretty objectively unattractive stuff, but they love it," she says. Hear, hear, Kelly. We think you'd like our new name for this phenomenon. [via New Scientist