Why We Love Fall So Much

We've conditioned ourselves into thinking change is fun — and packed the season with tons of nostalgia. 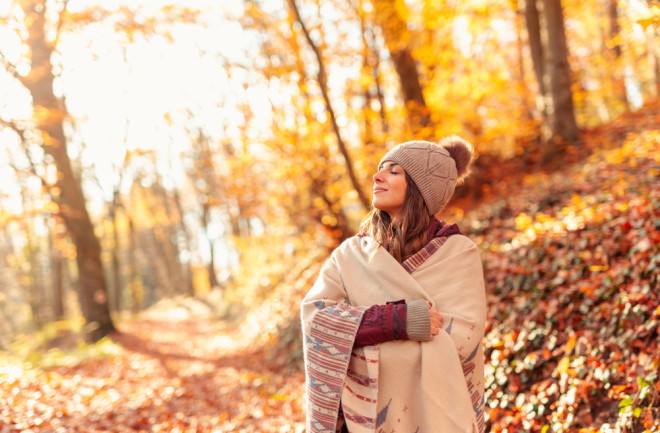 Once the unmistakable chill is in the air, you start to hear it: People professing their love for fall. Looking forward to the season is often written off as being “basic,” but it’s a feeling people hold onto strongly — and for good reasons, experts say.

Though you may not realize it, seasonal change can be hard for us, says Krystine Batcho, a psychologist at Le Moyne College. Any good or bad change forces us to actively think harder, which creates stress, she says, no matter if we’re switching to a dream job or remembering to haul our warmer clothes out of the closet. But humans aren’t content to leave change as an entirely negative process. It’s possible we’ve flipped the scenario and made change something to look forward to based on how we mark time. Calendars and seasons — as well as associating specific activities with different periods of the year — provides a sense of stability, Batcho says. Each year, the same habits return, giving us something to happily anticipate instead of just cope with. “We have successfully, I would argue, coped with the stressful aspect to the point where we try to change it into a positive experience,” Batcho says.

Transitional periods also stir people into feeling nostalgic, Batcho says. Despite being bittersweet, research shows the emotion is good for us. The happy and sad recollections can reduce loneliness, help us solidify social connections and drive home our sense of meaning in life. Researchers have also relatively recently coined the term anticipatory nostalgia: That feeling you get when you know you’re going to be nostalgic over something even before it’s over. “Humans have an amazing cognitive ability to anticipate the future and know how we might feel about things,” says Wing Yee (VerBon) Cheung, a social psychologist at the University of Southampton in the UK. Being able to experience an event while knowing how much it will mean to us later gives us the comfort of continuity and knowing our past belongs in our future too, Cheung says.

What do all these sappy emotions have to do with loving fall? In the U.S. at least, autumn marks the start of a time of year full of get-togethers, tradition and a sense of community — all the things nostalgia thrives on and perpetuates. Holidays and gatherings are among the most common memories people share when Cheung and her colleagues ask study participants to describe a nostalgic memory. And as we dive into a season change that we may have finagled into a more-fun-than-stressful event, we get a chance to revel in the feelings those gatherings provoke while adding new memories to the nostalgia bank. Knowing what good times lie ahead are easy to get excited for. “At least for people who look forward to these events, they’ve likely gone through many many rounds of having these gatherings and they know these are a great source of memories,” Cheung says.

Brands likely know how to capitalize on these feelings, too. Seasonal products — like the conspicuous pumpkin spice-flavored foods — fall in line with our sense of annual changes when they show up on shelves for limited periods. Each fall-only item gives us a sense of control too, Batcho says. If things feel turbulent, the foods, drinks or candles you like to have when it gets colder provide a sense of consistency. “I’d argue marketing has capitalized on this stuff, so they benefit from it, but it’s also a cycle,” Batcho says, “a feedback loop that enhances or exaggerates those needs we have.”

And though cultures around the world might find their nostalgia-inducing holidays (and associated food traditions) come at warmer times of year, the cooler temperatures fall ushers in might carry another layer of emotional impact. Research has shown that gloomier conditions, like rainy or thunder-filled days, prompt people to feel nostalgic and that the emotion might also work to literally make people feel warmer. In a study asking participants to recall events from their past, those who pulled up nostalgic memories estimated the room to be at a warmer temperature than those who brought up more generic memories. For people in the northern hemisphere celebrating fall or winter holidays, entering the colder half of the year could carry a double dose of nostalgia-inducing circumstances, Cheung says.

During the pandemic, immersing ourselves in nostalgia has been a popular coping mechanism. Older TV shows have made a comeback amongst viewers in the past two years, for example. And when it comes to fall, nostalgia might have carried some people through the past holiday season if they didn’t see family, making them that much more eager for this year’s traditions, Cheung points out.

So go ahead: Enjoy fall — and the pumpkin spice lattes, if that’s what does it for you.