Why We Feel the Need to Knock On Wood

Why we latch on to superstitious behaviors, and how to give them up 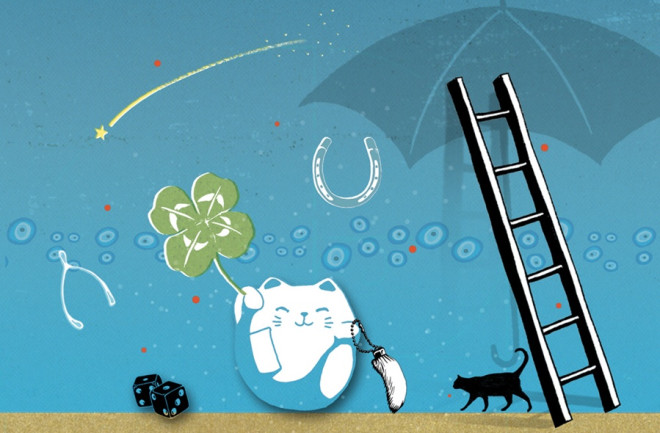 Last March, it snowed. And snowed and snowed. It was so heavy that roofs around my town were caving in, trapping pets and trucks and leaving people homeless. My own roof had several feet piled on. One night, flakes perpetually pelting down, I couldn’t sleep. I listened for the creaks of soon-to-collapse timbers. I imagined the porch overhang ripping away from the kitchen. I stared into the dark.

Did I eventually haul myself out of bed to shovel the roof? No. My fear of falling from such a height was too great — as was my love of a warm bed.

Instead, I knocked on wood. Repeatedly. My bedside table is wood, and my knuckles rapped it with each new terrifying thought. A wooden necklace hangs at the head of my bed. I tapped that, too.

This wasn’t a one-time, snowstorm-of-the-century deal. No matter the season or situation, knocking on wood is how I ward off the dangers in life.

I’m not alone. “Superstitions and magical thinking aren’t really special,” says Jane Risen, a professor of behavioral science at the University of Chicago. “They’re just part of the way we think about things.”

Don’t open an umbrella indoors. Avoid black cats. Be wary of Friday the 13th. Superstitions like these abound. In 2015, a poll by 60 Minutes and Vanity Fair found that 60 percent of respondents admitted to knocking on wood.

These beliefs begin in childhood. “Kids have to learn about these things first,” says Jacqueline Woolley, a professor of psychology at the University of Texas at Austin and an expert on childhood superstitions. “They’re picking up the superstitions of their particular culture.”

But soon after this childhood belief peaks, it starts falling. Take the concept of luck. By age 4, children are starting to hear about it. A couple of years later, they believe in it pretty strongly. “But then the skepticism kicks in pretty quickly after that,” says Woolley.

She and her team witnessed this transition during a study published in 2017 in the Psychonomic Bulletin & Review. When told an improbable story — for example, one in which a severely injured dog heals without medical care — most children tried to find a natural explanation. But 5- and 6-year-olds also often credited miracles or luck. These supernatural explanations started to drop with 7- and 8-year-olds. And 9-year-olds were much more likely to say that events were caused by skill or effort, not luck.

I can’t remember when my knocking-on-wood habit kicked in. I do, however, remember avoiding stepping on sidewalk cracks (or I’d break my mother’s back). I also remember that habit quickly dying, since it was impractical and simply hadn’t proven true.

Despite this childhood rise and fall in superstitious beliefs, some persist into adulthood, even for people (like me) who don’t truly believe. Will knocking on wood really save my roof? No. Yet I do it anyway.

In a study published in 2008 in the Journal of Personality and Social Psychology, Risen found that participants believed it was bad luck to tempt fate — even when they didn’t believe in fate.

She further examined this contradiction in a 2016 study published in the Psychological Review. “We see people maintaining these beliefs that they themselves acknowledge are irrational,” she tells me. “They’ll say, ‘I know it’s crazy, but I’m going to do this.’ We have [these beliefs] because they’re the output of pretty basic cognitive processes.”

We have two ways of thinking, she explains. One is intuitive: fast, efficient and quick to jump to conclusions. This can provide a seeming rationale for those crazy beliefs. Did my roof collapse? No. Therefore, my knocking on wood must have been effective — I’ll do it again next time.

Then we have a slower, more deliberate way of thinking. It may jump in to point out my faulty reasoning and recognize that my knocking has nothing to do with whether or not the roof caves in. But, Risen says, “detecting an error in your intuitive belief doesn’t necessarily lead you to correcting it. It seems that some intuitions are just very difficult to shake.”

People also like to feel a sense of control. I may not have been shoveling on the roof, but at least I was doing something. And it may have given me enough peace of mind to allow me to (eventually) sleep. “These beliefs and behaviors actually do end up regulating your emotions,” says Risen. “When you knock on wood, you may worry about this less.”

And it never hurts to hedge your bets — usually. Woolley provides her own example of owning a “parking angel” that once hung from her rearview mirror. If she were alone and desperate for parking, she might rub the angel and recite its attached poem. But if she had company in the car, “I might look like a fool, so I’m not going to do it,” she says.

Woolley explains that, once a superstition is established, we do a cost-benefit analysis that can make it seem like not performing the ritual poses a risk. Skipping it can even give some people anxiety. So if no one is around to think the superstitious ritual is crazy — and add a cost to performing it — we are more likely to complete it out of a “better safe than sorry” mindset, indicating we must believe in it at least a little bit.

I also wonder if parenthood has anything to do with the strength of my beliefs. I don’t only knock on wood to save my roof, but to save my children. Is my son at a party? Please bring him home safe. Is my daughter on a road trip? Please keep the roads clear.

And while my kids have never been gravely ill (knock on wood), superstitions have helped other parents in that terrifying situation. During a 2017 study in the neonatal unit at Santa Lucía General University Hospital in Cartagena, Spain, researchers discovered that about 40 percent of parents said they believed in magical concepts like the evil eye, and protective amulets were placed by more than 26 percent of the children.

The Myth of Old Wives’ Tales

So am I relegated to this superstitious life forever? No, according to Nadia Brashier, a postdoctoral fellow at Harvard University specializing in memory and judgment. She and her team published a 2017 study in Psychology and Aging on magical thinking in adults. They found that older adults, whose average age was about 70, were less superstitious than young adults averaging about 19 years old.

The key seems to be an accumulation of life experience. My mother never got hurt when I stepped on sidewalk cracks. I own a black cat that has never (as far as I know) caused problems. Although I used to fly on airplanes with a lucky teddy bear, the one time I forgot him, the plane didn’t crash. Once older adults have accumulated some evidence that those beliefs don’t work, “they kind of update” their beliefs about cause and effect, says Brashier.

“You may be very well practiced at completely ignoring black cats,” Risen tells me. But to kick harder superstitious habits, I should break the reinforcing cycle. Instead of knocking on wood, noticing the positive results and concluding I should do it again next time, I should dare not to knock on wood. “Assuming that it goes OK, you have to remember and note that experience,” she says. “Then the next time will be a little bit easier because you’ll realize, ‘Oh wait, things went fine last time.’ ” By keeping track of these outcomes over time, I can build up data that my slower side of thinking can grasp and use to shake my superstitious beliefs, Risen says.

So a couple of days ago, when my son stayed out late, I held back my hands. I avoided wood. I even managed to sleep. And guess what? He came home just fine.

This winter, I’ll try it with my roof.

[This article originally appeared in print as "Knock on Wood"]