Why This 12-Dot Illusion Is Giving People Fits 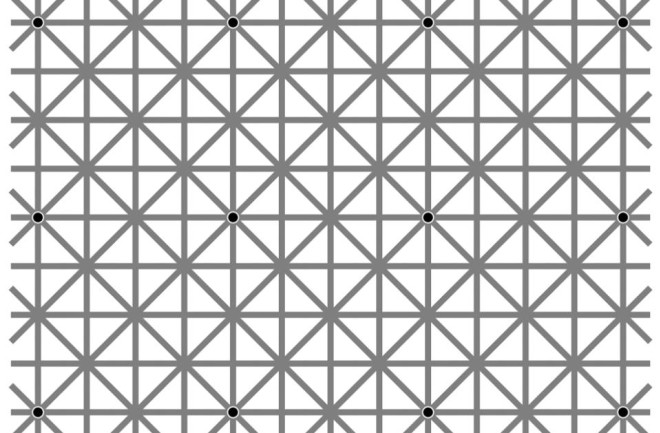 (Credit: Jacques Ninio) With one Facebook post, Japanese psychology professor Akiyoshi Kitaoka has sent the internet into fits. Look at the image above, and try to see all 12 black dots at once. Good luck. Honest, we aren’t playing tricks on you. Your eyes are literally deceiving you. Kitaoka posted this image on Sunday, which has since been shared over 10,000 times, and got a further viral boost when video game developer Will Kerslake shared the image on his Twitter page, and it quickly appeared on Reddit. Now, we’re all hopelessly chasing black dots. The image is called “Ninio’s Extinction Illusion,” named after the French scientist Jacques Ninio, who specializes in visual perception at the National des Recherches Scientifiques in Paris. There are actually 12 black dots at the intersections of the gray lines, but most people can’t see them. As Ninio explains in the journal Perception:

“When the white disks in a scintillating grid are reduced in size, and outlined in black, they tend to disappear. One sees only a few of them at a time, in clusters, which move erratically on the page. Where they are not seen, the grey alleys seem to be continuous, generating grey crossings that are not actually present.”

Basically, your eyes are playing tricks on you. Grid illusions like Ninio’s, which is a variant of the Hermann grid, exploit something called lateral inhibition in the retina. When light stimulates a photoreceptor, the activity of its neighboring receptors is significantly reduced. This helps us perceive edges clearly, but it can also trick our brain. When you stare at a grid, for example, it causes these photoreceptor cells to misperceive the stimulus they receive. Our visual system also isn’t very good at focusing on objects at the periphery of our center of vision. It’s easy to perceive a single word in a sentence, but the words at the top of the page or to the left and right of the page are blurry. As a result, our brain fills in the blanks at the periphery using contextual information. As The Verge’s Rachel Becker writes:

"And with this regular pattern of gray lines on a white background, the brain guesses that there’ll just be more of the same, missing the intermittent black dots."

Here are a few other illusions that work on the same, mind-bending principles. See the white or black spots flickering at the intersections in this image from Ninio's study?

Blurred Hermann grids produce, as found by Bergen (1985), a scintillation effect. (Credit: Perception)  Here's one last illusion. This one is called the McAnany-Levine extinction illusion (also via Kitaoka). Can you see 13 white dots?

McAnany-Levine's extinction illusion. Does your head hurt yet?