Why People of Other Races "All Look Alike" to You 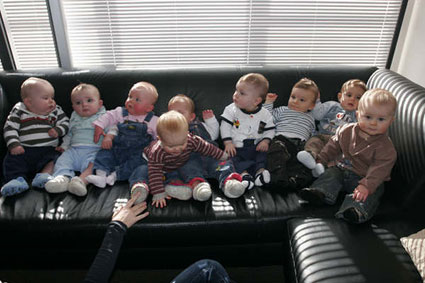 Some may say it as a joke, others might find it offensive, but it turns out there's some truth to the idea that people of other races "all look alike." A new study demonstrates that people have more trouble recognizing faces of people of other races. While this effect has been observed for almost a hundred years, scientists still don't fully understand why it happens and who it happens to, explains Ars Technica:

For the new study

, published in the Proceedings of the National Academy of Sciences, researchers monitored the brain activity of 24 subjects (12 western Caucasian, 12 eastern Asian) while they were shown pictures of two faces and asked if they were the same person. The two pictures were always of people of the same race, but were only sometimes the same race as the participant. The two pictures showed people making different facial expressions to make identification more difficult. In each subject's brain the scientists watched for a specific electrical spike that they know is related to facial recognition, known as the N170

event-related potential. If the person recognized the two pictures as different people, there were two similar-sized spikes, but if they thought the two pictures were the same person, there was one normal spike and a second, weaker spike. But this weakened second spike was seen only when a subject was presented with two pictures of a single person who was the same race as the test subject. When a subject saw two pictures of a single person who was a different race, the subject's brain was essentially flummoxed. Both the Caucasian and Asian groups had a much more difficult time recognizing identical faces from another race, study author Roberto Caldara told New Scientist

"That suggests it's a universal phenomenon in our perception," says Caldara, who adds that people who live among people of other races can learn to identify individuals better. Caldara says his team's techniques could help identify unreliable witnesses in criminal trials. "If a witness has a really clear other-race effect, we could not be sure that they had really recognised a defendant of another race," he says.

Related content: Discoblog: Given the Choice, Liberals Would Rather “Kill Whitey”

The Loom: This is your brain on racism. Or is that liberal guilt?