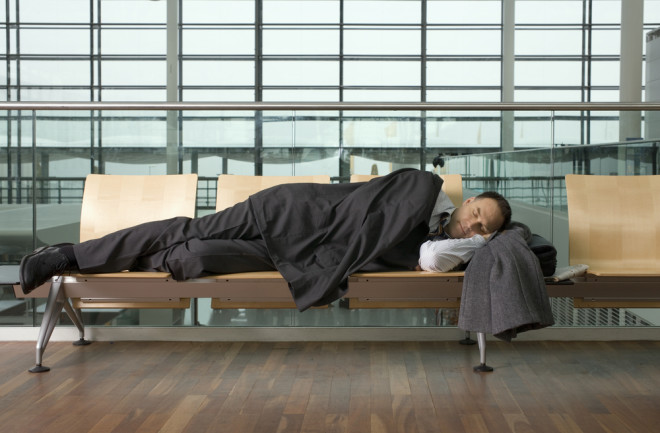 (Credit: Air Images/Shutterstock) When you step off a plane in another country, the first thing you usually want to do is hit the hay. It's the sleepy side effect of travel known as jet lag. Experienced travelers power through fatigue and wait until nighttime to get some shut-eye in an attempt to match the natural cycles of their new locale. While some people acclimate to time-zone jumping better than others, most agree that traveling eastward is a more daunting challenge to our sleep cycle, but it's not clear why that is.

Eastbound Put You Down

Now, researchers from the University of Maryland have posited a mathematical explanation for the west-to-east conundrum. Previous research has found that most people's circadian cycle is slightly longer than the length of an actual day — around 24.5 hours, and other studies have shown that when forced to make an adjustment, our minds sometimes align our internal clock in the wrong direction — think moving the hands of the clock counterclockwise to move forward three hours. Researchers combined this data with an algorithm that modeled a region of the brain responsible for keeping us on schedule, and simulated the dynamics of the circadian cycle. They estimated how long it should take us to recover from an international flight, given the direction of travel, to provide an explanation for why eastbound flights are so much worse. The researchers found that traveling eastward across nine time zones was the most jarring to the circadian cycle. That's because nine hours lies at the borderline between when our minds decide to set our clocks forward or backward, necessitating the largest readjustment. Nine hours east will cause our minds to shift the clock fifteen hours backward, while any more will flip the direction of the reset, shortening it. The fact that our circadian rhythm is slightly longer than an Earth day exacerbates the problem, increasing the time it takes to adjust to a new time zone. Traveling three time zones east, for example, requires just over four days of readjustment, while three time zones west takes a bit less than four, researchers say. A trip spanning six time zones east or west could mean nine and six days of recalibration, respectively. The researchers published their work Tuesday in the journal Chaos.

Our circadian cycle is controlled by a network of cells in the suprachiasmatic nucleus in our brain that are calibrated by cycles of light and dark. The oscillation patterns of these cells tells us when to go to sleep and when to wake up. But jumping time zones forces them readjust to the new sunrise and sunset schedule, a process takes place over the span of days, causing us to feel groggy and tired until we're back on track. All circadian clocks aren't geared the same, either. Some people find recovering after a long flight to be no more than an annoyance, while for others, it can be a heavy burden. The reasons for this can be explained by differences the systems that regulate and maintain our mental clocks, the researchers say. Some people respond more strongly to sunlight than others, and some people display better connectivity between the neurons that operate our circadian cycle. The prescription for mitigating jet lag is the same for everyone though. Get as much sunlight as possible to saturate your mind with the correct temporal signals, wait to sleep until it gets dark, and try to pre-set your circadian rhythm by using artificial light to mimic the time zone you're headed to.