Why does the gunslinger who draws first always get shot? 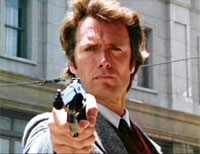 In Western films, the gunslinger that draws first always gets shot. This seems like a standard Hollywood trope but it diverted the attention of no less a scientist that Niels Bohr, one of history's greatest physicists. Taking time off from solving the structure of the atom, Bohr suggested that it takes more time to initiate a movement than to react to the same movement. Perversely, the second gunslinger wins because they're responding to their opponent's draw.

Now, Andrew Welchman from the University of Birmingham has found that there's something to Bohr's explanation. People do indeed have a "reactive advantage", where they execute a movement about 10% more quickly if they're reacting to an opponent. Of course, ethics committees might frown on scientists duelling with the pistols in the name of discovery, even if the people in question were graduate students. So Welchman designed a laboratory gunfight, played out using buttons rather than guns.

Two opponents faced each other and had to press a series of three buttons as quickly as possible. To begin with, they held a central "home key" with their trigger fingers and they had to wait for a short spell before before starting the round. The point where they were allowed to begin varied from trial to trial and the players weren't told how long it would be. There was no starting pistol or countdown. Either player could start the race but if they went too soon, an alarm would sound to signal a false-start.

These button-mashing duels revealed that, on average, the players completed their sequence 21 milliseconds faster if they reacted than if they initiated. That's an improvement of around 9%, and most of this advantage came at the very beginning, when they pressed the first button. It's an interesting result and like all good scientists, Welchman systematically considered and ruled out several possible explanations for it.

He thought that the three-button task was quite complicated compared to, say, drawing a gun but the reactive advantage remained even when the task was distilled to a single button press. He thought that the expectation of a warning alarm might have slowed the players who started first. But the reactive advantage remained when he repeated the experiment without any warning tone.

He considered the possibility that the reactors might gain an advantage by being able to model their actions on someone else's. But even if the button order was swapped for one player, or the button array rotated by 90 degrees, still the reactive advantage remained.

Perhaps players were steeling themselves up for one role or the other, or perhaps they planned to win by sacrificing accuracy for speed. But that's not possible - remember that the players didn't know beforehand if they were going to initiate or react. Those roles were only decided once someone moved, which prevents either one from carrying out a pre-planned strategy.

Perhaps some people always chose to react and always did so very quickly? Not so - Welchman found no link between the probability of reacting and the speed of reactive movements. Finally, Welchman wondered if the social aspect of the game was important, so he asked players to duel a computer or a virtual player in another room. And still, they moved faster if they reacted than if they initiated.

Having ruled out these myriad reasons, Welchman thinks that the reactive advantage stems from our use of different brain networks, when moving proactively or reactively. There's plenty of evidencefor separate pathways already, and Welchman's idea is that one of these just happens to be slightly faster than the other.

He suggests that the our brain holds in check the actions we plan to carry out, possibly using an area called the supplementary motor area (SMA). Another area - the pre-SMA - lifts this block in order to launch the movement. When we move reactively, another part of the brain - the parietal cortex - lifts the block in a similar but quicker way. From an evolutionary point of view, this all seems reasonable. Reactions are among the most important movements that animals can make, such as escaping from a predator's strike.

So what does this mean for Western gunslingers? Is it always better to draw second? Well, not quite. Welchman also found that the 21 millisecond benefit of reacting quickly was totally overwhelmed by the 200 milliseconds it took to react in the first place. Despite their faster movements, the reactors very rarely beat the initiators. If Greedo hadn't been such a bad shot, Han[strike]s[/strike] would have died (not counting the subsequent editing).

Bohr's idea, it seems, was correct in theory, but wrong in practice. That didn't stop Bohr himself from testing his hypothesis in experimental duels against fellow physicist George Gamow using toy pistols. According to anecdotal reports, Bohr always reacted and he won every duel, but Welchman has the final word on the matter:

"Our data make it unlikely that these victories can be ascribed to the benefits associated with reaction. Rather, they suggest that Bohr was a crack shot, in addition to being a brilliant physicist."