While it’s not for everyone, observing these brawls may stimulate the brain’s reward networks. Our enjoyment likely depends on both neurological and cultural factors. 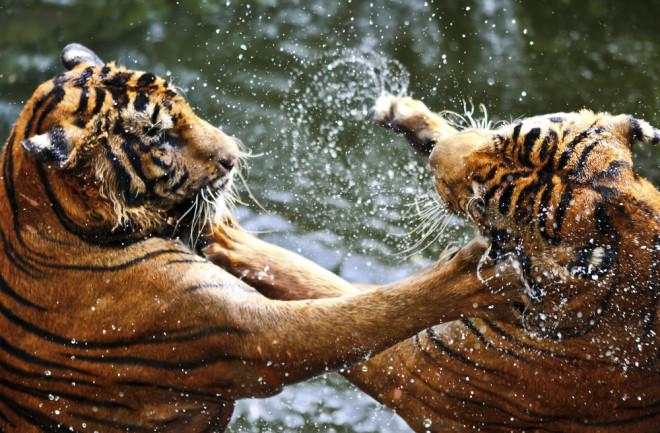 Animal violence has long delighted humans. Brawls between creatures of all sorts have provided a source of entertainment since the dawn of domestication: By some estimates, cockfighting dates to the Indus Valley civilization. The bloody pastime may actually explain why jungle fowl were raised in captivity in the first place, perhaps giving rise to the domestic chicken. And it might even count as the world’s oldest spectator sport.

Since then, animal confrontations have drawn crowds around the world. Enthusiasm for dogfighting emerged in the wake of the Roman conquest of the British Isles — enterprising soldiers noticed the savage temperaments of the mastiffs used by their battlefield opponents and forced them to clash. For public enjoyment, Roman emperor Trajan pitted 11,000 animals against each other between A.D. 108 and 109.

Later on, the Elizabethans favored bull and bear baiting — arenas that featured these conflicts gave Shakespeare’s Globe Theatre a run for its money. People also have forced bettas, canaries and even crickets to fight for entertainment.

Beginning in the 19th century, mounting criticism slowly brought a stop to these practices in much of the world (at least, officially). Many countries now prohibit animal fights, but regulations frequently go unenforced.

Enthusiasm for these bouts persists and fighting rings still flourish underground where they facilitate lucrative gambling enterprises. In 2007, NFL quarterback Michael Vick pled guilty to charges that he was involved in an illegal dog-fighting operation. Dog fighting is still common in Afghanistan, India and South Africa, all of which have technically banned it. And some governments, like Japan, haven’t instituted national bans.

While they aren’t universally accepted, staged animal conflicts appear to be a human constant. In some places, proponents claim that animal fights hold cultural significance. Legislators in Puerto Rico, long a cockfighting stronghold, have sought to overturn a federal ban enacted in 2018. Advocates have gone so far as to petition the U.S. Supreme Court to reverse the prohibition on a states’ rights basis.

Even the food chain draws a crowd. YouTube videos of people feeding live prey to their exotic pets have become enormously popular. In China, visitors to tiger farms can hurl live chickens from buses and watch the big cats swat the hapless poultry from the air and devour them.

What is it about the dog-eat-dog dynamic that gets us going?

Scientists don’t entirely understand why some people love observing critter conflicts, but the developing — and contentious — literature on the psychology of violence does give us some insight. “People are fascinated by that imbalance between two animals and the struggle between life and death,” says Sherman Lee, a psychologist at Christopher Newport University.

Still, it’s all relative: Even those who would never dream of betting on a pit bull fight may still enjoy nature programming that features predators in pursuit of prey — lions stalking buffalo on the African savannah or tigers picking their way through the Sundarbans swamps in pursuit of chital. That’s far more interesting to follow than a gorilla munching on bamboo shoots.

Marty Stouffer, host of the popular PBS nature program Wild America, cynically exploited this attraction to the spectacle of predation and conflict — in the 1990s, he was accused of forcing fatal animal encounters and passing off the recordings as natural events.

Of course, many of us relish watching violence between other humans, as well — whether it be a boxing match or a viral video of two people duking it out in a parking lot. The reasons why these phenomena are so stimulating to some, and so revolting to others, are still debated.

“There's something that draws people to it, but also, at the same time disgusts them,” notes Erin Buckels, a psychologist at the University of Winnipeg. “We know that violence, blood and guts are physiologically arousing.”

The appeal of grisly fights, either animal or human, could be explained by the pain-blood-death complex, according to a 2006 paper by the late Victor Nell of the University of South Africa. He linked it to the early adaptations of predatory animals: Because predation brings significant risks, he reasoned, the brains of predators must have evolved to positively reinforce what they might otherwise fear.

We do know that sounds of distress and the smell of blood trigger positive responses. Aversion to them would be maladaptive — if a lion wimped out on attacking a zebra, it wouldn’t be able to hunt.

The same could be true of our own species because our ancestors lived in small groups that inevitably came into competition with others. And, of course, some animals posed a significant threat. Arousal by stimuli associated with violent activity has remained a useful tendency, Nell concluded, and its persistence explains why some react so positively to violence today.

But his hypothesis is controversial. Many psychologists feel that his theory ignores social factors that reinforce or discourage violent behavior in humans. Behavioral reinforcement is likely more important in facilitating positive responses to violence, argues Michael Potegal, a neuropsychologist at the University of Minnesota.

Why Observing Violence Can Feel Good

Research has found that violence and aggression are partly mediated by the brain’s reward networks. The ventral tegmental area (VTA) produces dopamine that’s transmitted to the striatum, allowing us to anticipate a reward. The resulting flood of endorphins and enkephalins produced by our brains triggers a pleasurable sensation. This mechanism can also be activated vicariously — when we are simply observing violence, rather than participating in it directly.

“When people who enjoy violence are watching violence, you see activity in these reward networks,” explains Abigail Marsh, a psychologist and neuroscientist at Georgetown University.

Studies of violence in athletic competitions suggest that staged conflicts may be advantageous in an evolutionary sense, since they allow humans to channel their natural aggression in a contained environment. Proponents of this hypothesis point to the fact that football, arguably the most violent mainstream sport, is also the country’s most watched. Viewership of mixed martial arts fighting (MMA), which highlights brutal behavior, has surged since its 1993 debut as well. Spectators, they argue, enjoy a cathartic, energizing effect. The same may be true of animal violence.

“If you're feeling bored, or low-energy, research has found over and over again that we tend to seek out media that will up our energy levels, that will get our attention, that will occupy us,” relates Jessica Myrick, a Pennsylvania State University communications professor who has researched media’s presentation of shark attacks.

Of course, not everyone savors violence — many are actually repulsed by it, even in natural contexts like a lion hunt. Sensation-seeking tends to vary in the general population, meaning that some people eagerly pursue novel and highly stimulating experiences and others avoid them. Certain groups tend to exhibit higher sensation-seeking tendencies, according to psychological surveys. These include decorated war heroes who have taken significant risks, for example, or mountain climbers (for obvious reasons).

Individual differences in brain chemistry and structure likely play a role here. MRI studies have shown that those with higher measures of sensation-seeking characteristics exhibited higher cortical arousal when exposed to strong stimuli, while those who scored lower on the sensation-seeking scale demonstrated cortical inhibition.

Marsh also points to the fact that those with psychopathic tendencies, who are known to enjoy vicarious violence, commonly have lower levels of amygdalae — structures in the brain associated with the regulation of emotions. Conversely, those with unusually high levels of empathy had larger amygdalae, as she found when studying kidney donors.

Still, our reactions to violence don’t occur in a vacuum. Feelings toward animal clashes are socially moderated on both individual and population levels. Exposure to animals at a young age likely increases empathy toward them, Marsh says. Similarly, societies that emphasize altruism in the human sense tend to extend those sensibilities to animal welfare. The inverse is also true.

Marsh urges a holistic attitude toward these preferences. “Whether someone enjoys watching a large predator consume another animal or not reflects the balance among emotions,” she says. ”Being scared of predators, feelings of awe, excitement, action, novelty — those are the sort of things that draw people toward these experiences. The thing that pushes people away from them, obviously, is compassion, which is really powerful.”