Worries about what other people think about us can ruin our alone time. 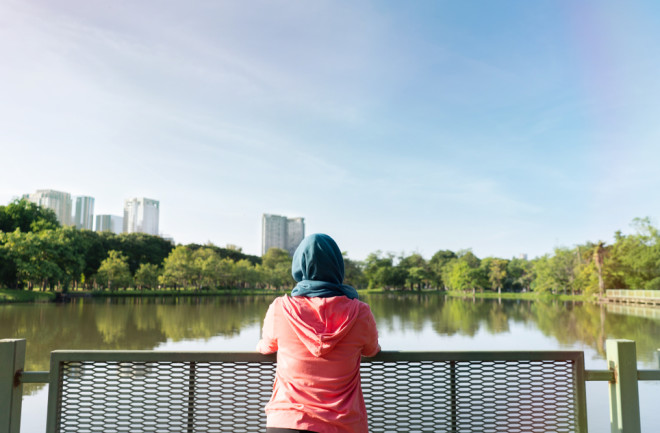 There’s a strange paradox in the way people think about “alone time.” When Thuy-vy T. Nguyen, a social psychologist at the University of Durham in the U.K, asks research participants to think back on a time they were by themselves and liked it, it’s easy for them to do. But when people hear of a friend’s plans — particularly to do something fun — and ask whether that person is going alone, there’s often an implication that being by yourself is the last resort, Nguyen points out.

“When they anticipate it, then they tend to think of it like a negative experience. But then when people spend time in solitude, they recall it to be positive,” says Nguyen. Why people enjoy alone time while anticipate it to be terrible is a tricky research question to answer. But understanding the circumstances might help craft places where alone time sounds like a happy prospect.

I Have Friends, I Promise

Any difficult feelings about being alone in public mostly leave out the activities we see as practical. Working out or grocery shopping alone isn’t subject to the same scrutiny, and are often the activities people feel okay about doing by themselves, Nguyen says.

But when we find ourselves doing something we think ought to be social, like going out to dinner or seeing a movie, discomfort sets in — possibly because we worry people will think we don’t have friends. In a 2015 study, researchers posed a range of hypothetical scenarios to people. Some were utilitarian, like grocery shopping, while others were purely for fun, like seeing a movie in a theatre. The study team asked participants to imagine doing the activity alone or with friends. When asked how likely they were to do the different activities, people were more likely to say they’d join group social outings than agree they’d do the same things alone.

Participants also shared their guess at how many friendships onlookers would think they had if they went through with the activity. Those assigned to think about doing “for fun” activities alone said they would look like they had fewer friends than those who thought through doing the same thing as part of a group. People also thought they’d be less likely to enjoy fun activities alone than with groups, leading the research team to conclude that the activities sound less fun to do alone because we realize people might think we don’t have friends.

Of course, sometimes people do spend time alone because they don’t feel like they have the social connections to make the activity enjoyable. Nguyen has studied college students who feel like they struggle to fit in at their school. When assessing why they spent time alone, Nguyen found some students felt stuck being by themselves against their will while others chose to do things alone because they knew it would be more enjoyable than doing it with other people. Those who chose to be alone had higher self-esteem and felt less lonely. What makes the difference in outcome is choice, Nguyen says. “Being alone is usually better if it's a choice, rather than if it’s something that you’re forced to do.” And even when wanting to be alone, some individuals are tempted to turn would-be social situations into ones that look utilitarian. For example, people might feel compelled to bring a book to the park so they appear like they are there for a reason, Nguyen says.

Since we’re interested in looking like we align with expectations, some of how we feel about being alone in public might depend on how those spaces are designed. YooHee Hwang, a social psychologist at the Hong Kong Polytechnic University, investigated this with her colleagues in a restaurant setting.

The research team told study participants to imagine themselves going out to eat alone and handed them a mock restaurant floor plan. In some cases, tables with diners eating by themselves were grouped together, while in the other floor plans, singles tables were mixed amongst tables full of groups. The participants shared what they’d think of the other solo diners and how much they thought they’d enjoy their meal. When clustered with other people eating alone, the participants liked the other single diners better. As a result, they also reported that they would enjoy the meal more than those who were sitting amongst tables of families or couples. Put together, single diners might feel more like they were in a community, Hwang says.

How comfortable someone is alone includes how safe they feel, a factor design choices can address, too. In a 2013 study, researchers showed study participants one of three parks and asked them to imagine how they’d feel in the space alone. Participants consistently rated parks full of trees and clumps of bushes — places people can hide behind — as less restorative and more fear-inducing than wide, open fields.  Restaurants, parks or any other space looking to attract visitors might be inclined to think less of solo diners. “I'm aware that solo diners may not bring as much revenue compared to social diners,” Hwang says, “but solo diners and social diners are not mutually exclusive.” People can bounce between each status, and a negative experience alone might alter someone’s perception of how enjoyable the place is and make them less likely to come back. And ultimately, the number of single households and diners are on the rise and making it more likely that public spaces would benefit from making alone time more comfortable. “This sort of consumer is growing,” Hwang says. “Although it may not be mainstream for now, it could be one day in the foreseeable future.”