Which American racial group has the lowest fertility?

The really sad events around the Discovery Channel hostage situation, and the subsequent death of James Lee, made me wonder a little bit about total fertility rates. Lee seems to have had sentiments very similar to some of the anti-humanists within the Deep Ecology movement. Unlike the mainstream Left these elements of Deep Ecology are greatly concerned about the high fertility rates of non-developed societies and of the immigrants from those societies in a proximate sense (that is, the fertility is of a concern foremost because of the direct immediate environmental footprint, rather than a symptom of broader societal underdevelopment). I've probed the international differences in total fertility rates before, but what about in the United States? You probably won't be surprised which segment of the population has the highest fertility, but what about the lowest? The US Census Bureau tracks these sorts of things in detail. So according to the Census Bureau the TFR's in 2008 were:

Yes, Native Americans have the same TFR as non-Hispanic whites! Total surprise to me. The profile in relation to within wedlock and out-of-wedlock differs between the groups a fair amount. Here are the percents born to unmarried mothers: 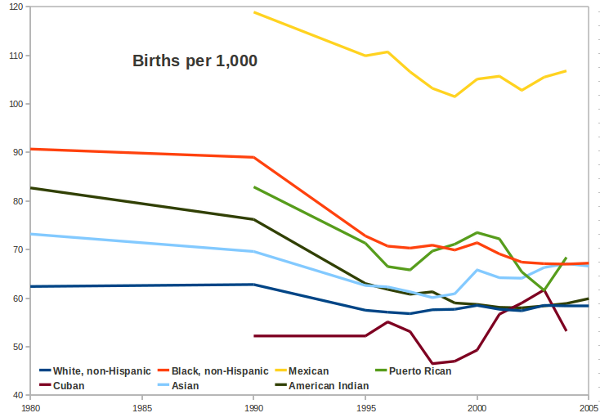 As you can see, the "high Hispanic fertility rate" is really the high Mexican American fertility rate. Cuban Americans have fertility below non-Hispanic whites (Cuba's TFR is 1.6, though Cuban Americans are highly unrepresentative of Cuba demographically and culturally somewhat isolated from the island), and Puerto Ricans seem to track black Americans. The latter aligns with the sociology I've seen that indicates American Puerto Ricans share many norms and vital stats with the blacks next to whom they settled in Manhattan (Puerto Ricans in Puerto Rico have a TFR which is the same as non-Hispanic whites). Interestingly, the Native and non-Hispanic white fertility has only converged in the last generation or so. One issue to consider is that there's been a large increase in the number of Americans identifying as Native American since the 1980s, so this may have altered the fertility simply because of a change in the demographic composition of those who identify as Native American. Another point is that Mexican Americans have a TFR which is much higher than in Mexico, which is now around ~2 (though if you look up the data, you'll see some underdeveloped southern Mexican states are around ~3).

Hormonal Birth Control Might Cause the Brain's Hypothalamus to Shrink