Where's That Viagra for Memory? 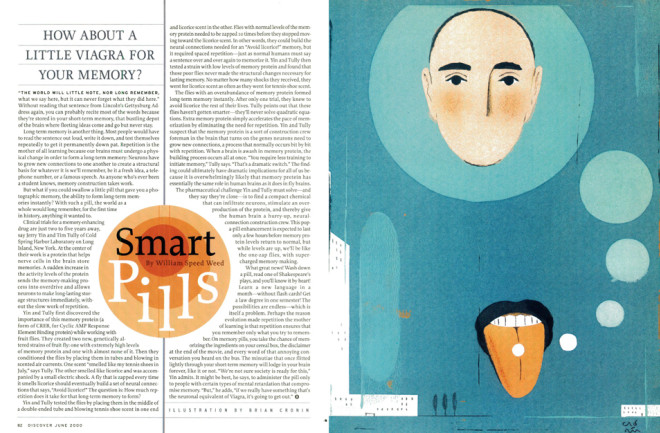 In June 2000, Discover published an article about how we could someday be speedier learners. Want to memorize a Shakespearean play? Just read it through once. Want to learn another language? Give yourself about a month. All this with the help of a memory-enhancing pill.

At the center of the article (“Smart Pills: How About a Little Viagra for Your Memory?”) was a protein called CREB, or cyclic AMP response element binding protein. It works as an on-switch in the brains of humans and many animals, promoting new connections between neurons to help build long-term memory.

Scientists at New York’s Cold Spring Harbor Laboratory, featured in the 2000 article, were inspired by fruit flies. They had genetically engineered one group of the insects to produce high CREB levels and another to produce low levels. In a setup to test learning rates, high-CREB flies knew, after one zap, to avoid a smell associated with getting shocked. The results led the team to consider possible brain gains in humans.

At the time of our original coverage, researchers estimated human trials would start in two to five years, but those plans didn’t quite pan out.

Now, after almost two decades, several human trials of CREB-boosting drugs are finally underway. The most advanced treatments have passed the FDA’s initial safety phase and are in proof-of-concept studies with humans, says Tim Tully, one of the scientists then with Cold Spring Harbor Laboratory who was featured in the story.

Tully, who went on to work at a pharma startup called Dart NeuroScience, says the realistic timeline for FDA approval is another decade.

However, the treatment currently under development isn’t targeting memory boosts, but rather brain trauma that stroke patients experience. Just as high CREB levels increased connections in the fruit flies, the protein could help stroke victims reestablish damaged or lost connections.

Tully expects that, once they’re available, results from human trials will be concrete evidence of the treatment’s effectiveness. “If the patient can move his arm again, he’s moving his arm again,” Tully says. “You don’t have to debate.”