Where Is Your Self?

When asked to determine the bodily location of our selves, we're all over the place. 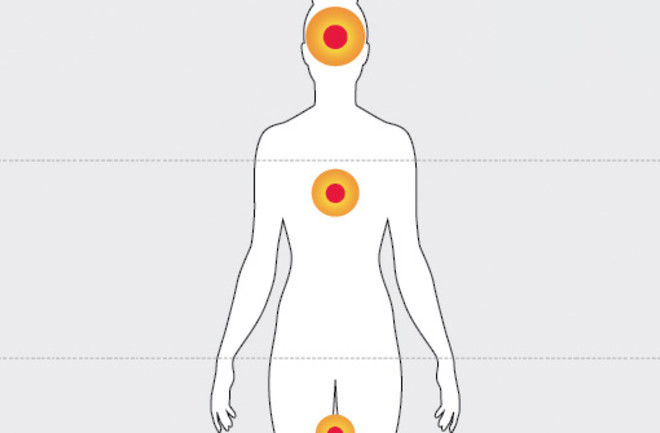 So it seems the “I” spot can change depending on the context. That makes sense, given that there are lots of different things we could mean when we talk about the self, Alsmith says. It could be where our thinking is going on, or where our emotional center is. Alternatively, it could be the point from which we initiate action or even our body’s center of gravity.

“What we worried about with some of the literature is that it is very easy to narrow people down to giving one answer that is the correct answer,” says Alsmith. “It might be that there is more ambiguity.”

I can relate to this. Even though my go-to answer would generally be the bridge of the Starship Emma, there are times when my self seems to wander. This has happened more often as I’ve grown older. In my 20s, I remember saying that, apart from a few key pleasures of the flesh, I would be pretty happy as a brain in a tank. My real self — my thoughts, my writing, my memories — was all in the brain. But since I’ve turned 30, I’ve given birth to two children and taken up exercise (in a desultory sort of way), and my body seems more salient to me now. There are moments when my self seems to reside in my heart or my reaching palms or even in my abdominal muscles.

But when I’m sitting at my computer, as I am all too often, I am the little person behind the eyes — my consciousness incarnate. This idea of the homunculus led me to Tufts University philosopher Daniel Dennett and his criticism of what he calls the Cartesian theater — the notion that consciousness occurs at a single place in the brain, symbolized by a small person within it receiving all sensory input and issuing commands.

“Cartesian” refers to French philosopher René Descartes. I assumed he had something to say about consciousness and the self, so I asked my husband, who is, helpfully, a philosopher. He explained that Descartes believed our conscious selves — our minds — are separate from our physical bodies, even made of a different, ineffable stuff. But, he said, this dualist view is no longer in vogue.

Yet it has intuitive pull. And it could explain why many people still gravitate toward the idea of a single spot where consciousness resides.

Neurologists tell us that conscious-ness is more diffuse, emerging from all the activity of the brain and body. It all coalesces into a story our whole brain tells to itself, which changes millisecond by millisecond, in what Dennett appealingly calls the multiple drafts model.

If our personal identity is a story we tell about our bodies and certain brain activities that occur in them, and I think it is, then locating the self at a single point serves a central purpose: It separates the storyteller from the story. If all the activities of the brain and body are the narrative, then we seek a point of view from which the narrative can be told — a narrator. That’s my homunculus: the storyteller of Emma.

When my daughter confidently pointed to her heart as her self, I asked why. “Because I love you!” she said. “But why does that feel like you?” I pressed her, laughing. “Where is Adele?” She instantly pointed to her head — the other common locus of the self. What I see now is that she was shifting between two stories about herself, from the Adele as a feeling person, a daughter who loves her mother, to the Adele who thinks and acts in the world. One is in the heart, the other in the head. Both are stories she will be telling her whole life, millisecond by millisecond, with many, many drafts.

[This article originally appeared in print as "'I' Marks the Spot."]

One night at dinner, on a whim, I asked my 4-year-old daughter where her “self” was. Smiling, Adele thumped herself vigorously in the center of her chest, which surprised me.

First of all, my self is definitely in my head. I’ve got a little homunculus sitting behind my eyes, running the whole show, like Captain Kirk on the bridge of the Enterprise.

Secondly, how could she answer such an abstract, metaphysical question so easily? It was as if I had asked her whether she liked ice cream. Is it really that intuitive that our selves should be located at a single point within our bodies?

Intrigued, I had friends ask their children where their selves were.

One 5-year-old tapped the side of his head. A shy 6-year-old said, “In my eyes?” And 4-year-old Bella responded, her mother reported, “without hesitation, doing a little dance with her fingers and pointing to her heart.”

As a science nerd, my next move was obvious: dive into the scientific literature. It turns out there are a handful of studies that have used various methods to find out where people believe their selves are located. We would see who was right: those who went for the head, or those who felt most at home in their hearts.

At first, the head appeared to be, well, ahead. In 2008, a group of Italian researchers used structured interviews to probe the location of the self, which they defined as “the I-that-perceives.” Of their 59 subjects,

83 percent indicated a point between and behind the eyes. Score one for my Captain Kirk.

We would see who was right: those who went for the head, or those who felt most at home in their hearts

But my daughter’s heart-self shows up in the scientific literature, too. In 2011, two researchers in Germany showed 87 online volunteers a silhouette of a human form and asked them to place a crosshairs on the spot where they felt their self was. Two clusters of responses emerged: A larger group said near the brain, and a smaller one said near the heart.

The differing answers suggested to me that either some studies are better than others at getting people to locate their true selves, or that there isn’t one right answer. It turns out that a pair of researchers in Denmark had explored exactly that question.

Adrian Alsmith of the University of Copenhagen and a colleague used physical pointers to probe the location of the self. They slowly moved a pointer — in this case, a barbecue skewer clamped to the base of an Ikea lamp — up and down people’s bodies, telling them to call out when the skewer pointed directly at them. They found that if they started from the top, participants were most likely to respond when the pointer hit the upper face. But when they started from the bottom, the same subjects were most likely to stop the pointer at the upper torso. Both locations felt right.