When COVID-19 'Brain Fog' Hit, They Turned to a Language App

These COVID-19 patients started using Duolingo to help with their sluggish thinking — and neuroscience can explain why that makes sense. 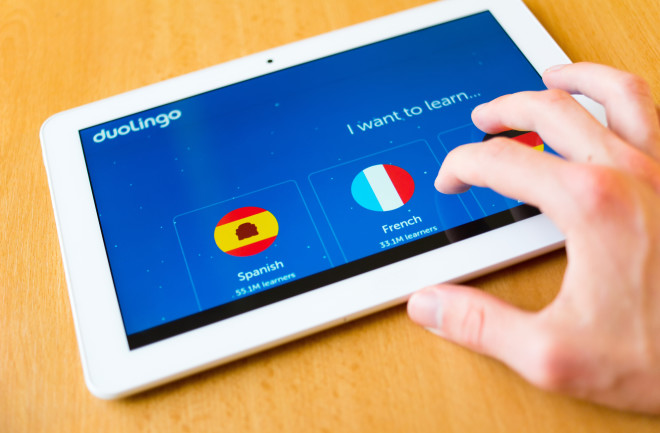 Meet Charlene Williams, a 56-year-old who practices Spanish on her smartphone every day. A language app, she says, helps her manage her post-COVID-19 brain fog. Williams got COVID-19 pneumonia in November 2020, right before Thanksgiving. After a few months of congestion, loss of taste and smell, hair loss, and a significant drop in weight, the long-hauler began to recover but noticed some symptoms still lingered.

The most jarring symptom for her was the brain fog — a prolonged sense of “fuzzy” or sluggish thinking — which she still deals with today. “It was pretty distressing when people noticed it,” she says.

Brain fog can look different person-to-person, but it’s roughly “synonymous and analogous to traumatic brain injury,” says Neilank Jha, a Canadian neurosurgeon who specializes in brain injuries and concussions. For over a decade, some argued that language training could help patients recover from traumatic brain injury, or TBI. Both TBI and certain cases of COVID involve inflammation in the brain, as well as a decrease in plasticity and gray matter volume. In such cases, experts recommend patients enhance neuroplasticity (the brain's ability to morph itself by strengthening or weakening neural connections) while decreasing neuroinflammation via challenging and rehabilitative tasks.

One of the best ways to do that? Yup, language training.

“Language may be especially helpful because it is not a unitary process,” says Alicia Walf, a neuroscientist and senior lecturer at Rensselaer Polytechnic Institute. “Language can include speaking, comprehending spoken words, reading, writing, and the many associated brain regions of language and memory.” As for Williams, she was encouraged by her doctors to continue using the language app Duolingo to reap the neural benefits and help manage her fog.

The Benefits of Bilingualism

For years, studies have shown that bilingualism supports auditory processing and can boost self-confidence, anxiety management, and cognitive performance. The bilingual brain may also be more resilient against dementia, according to Ellen Bialystok, a distinguished research professor of psychology at York University. It’s not so much the Spanish or French vocabulary but the process of learning a language that enhances neuroplasticity and strengthens the brain.

“It makes neuropsychological sense,” says Eric Zillmer, a professor of neuropsychology at Drexel University. “You’re accessing information in different ways, using other circuitries or abilities that you have. ​​That’s a really meaningful development that people can help themselves.”

In fact, language learning might supports memory, flexible thinking, and self-control much in the same way brain training apps do, according to a study published last October in the journal Aging, Neuropsychology, and Cognition. The study compared Duolingo to an app called BrainHQ and found it was similarly effective at boosting working memory and information processing in older adults.

“It may be just the right sweet spot of a mentally engaging activity for someone who is having a hard time mentally because of an illness,” says Jed Meltzer, the study's lead author and a cognitive neuroscientist at the University of Toronto.

Plus, respondents found the app to be more enjoyable than typical brain training. The app’s quirky sentences, like “The Loch Ness monster is drinking whiskey,” cause users to slow down and, instead of relying on context, rely on what they encounter. And this enjoyability factor may help patients feel less stressed, which, in turn, can decrease neuroinflammation and allow them to rebuild synapses.

The coronavirus is enigmatic in that it has even affected some patients’ language skills as long as six months after their initial symptoms. A research paper published in The Lancet last July found that 46 percent of long COVID-19 patients had difficulty finding words while speaking or writing, and 28.85 percent of the respondents found changes to their second or third language skills. More than 100 million people worldwide have suffered from long COVID symptoms, according to a meta analysis by researchers at Penn State College of Medicine published last October.

Allison Bailey, 24, first noticed symptoms on April Fool’s Day, 2020. “I couldn’t tell anyone,” the Yale graduate says, “because I felt that they were going to think it was the worst April Fool’s joke ever.” During a time when she wasn’t able to focus,  Bailey, who lives in San Francisco, California, says her daily use of the app caused her mental health to improve, which helped lessen the brain fog.

Scientists say even those not diagnosed with COVID-19 may have experienced a type of cognitive impairment and rise in neuroinflammation aptly called “pandemic brain,” which is caused by stress and anxiety. “For the same reasons that I think this is a good thing for people with long COVID brain fog, it’s a good thing for everybody,” Bialystok says. “With aging, we basically all develop brain fog.”

Mellica Telemacque, 48, works as a middle-school teacher in Atlanta, Georgia. She got COVID in September 2020 and experienced symptoms for weeks.  “I know what I’m talking about, but I can’t find the words — they’re just not there. People have to fill in the gaps for me,” she says. She started practicing Spanish on the app to avoid “mental deterioration,” adding that her students also helped keep her on her toes.

“The short answer is yes,” says Jha. “Learning a second language creates new neural pathways in the brain, so that’s why it can improve your cognitive function.” Nevertheless, it isn't a panacea. Jha also recommends TBI patients and "long haulers" avoid alcohol and drugs, adopt an anti-inflammatory diet and meditate. Language learning is part of the equation, but it shouldn’t be the first thing brain injury or COVID-19 patients seek.

Avi Nath, clinical director at the National Institute of Neurological Disorders and Stroke, says those dealing with fog or other cognitive impairments should see a specialist. “They need proper neurocognitive testing to be done by a professional,” Nath says. “That is usually a better approach than saying, ‘Oh I’m just going to do some language skill, and that’s going to solve my problem.’ That’s a bit too naïve, I think.”

Still, he says, brain training and language apps can be helpful in the recovery process. Alexandra Merlino, a speech pathologist at the University of Pennsylvania who conducts post-COVID rehab, hasn’t tried language apps as a rehab tool yet but says patients need to make sure they’re pacing themselves. “The patients need to exercise their body and brain, but also make sure they incorporate consistent breaks so that they don’t overdo it,”  Merlino says.

If they push themselves too hard, patients may enter a post-exertional malaise or “push-and-crash cycle,” where they find themselves trapped in a loop of overexertion and rest. To avoid this, patients might utilize concepts like “spoon theory,” which involves a person rationing energy one imaginary spoonful at a time, and the “energy envelope,” which involves a patient focusing on their available energy, expended energy, and symptoms. In an online forum on Duolingo’s website, users who dealt with brain fog either because of COVID-19 or other chronic illnesses agreed that pacing can be a key factor in regaining one’s forgotten second language or learning a new one.

Eventually, Telemacque, who paced herself on the app, climbed up the language leaderboard after much persistence and patience. “Knowing that I could regain what I had seemingly lost was just so...”

Telemacque trails off, allowing her next thought to jump in.

“I know it’s not going to linger — it’s just a work in progress.”