TikTok has been gaining millions of users/followers from around the world. What about this social media platform makes it so engaging and is drawing viewers in at such a fast pace? 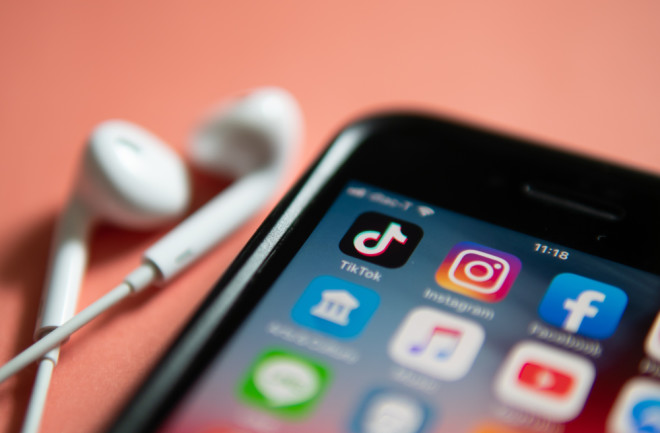 With her dark hair in a high ponytail and a rose-colored blush covering her nose and cheeks, a 23-year-old Bella Poarch takes a zoomed-in video lip-syncing to the tunes of “M to the B,” a viral rap by a British artist Millie B.

Posted in August 2020, this 10-second TikTok racked up millions of views on the app, and Bella Poarch skyrocketed to fame in a matter of days. Now, with 15.6 million likes and more than 150 million views, “M-to-the-B” is the most liked TikTok ever.

“TikTok is like magic but you never know which spell will work,” says Irine, a 18-year old regular user of the app.

TikTok was created by Chinese tech giant ByteDance and was first released in 2016 under the name “Douyin,” which was marketed as a video-sharing service similar to Facebook and Instagram (both of which are banned in China). The app then merged with a popular social media platform called Musical.ly, which allowed users to create and share short 15-second lip-sync videos. Finally, in August 2018, ByteDance released the global version of Douyin, TikTok, available for iOS and Android.

In the beginning, this flashy app with a neon-shaded music-note logo found great success among children and young adults. But then, the audience changed.

In a matter of months, Dwayne “the Rock” Johnson was on TikTok dressed as a Christmas elf, Arnold Schwarzenegger was on the platform, riding a minibike and chasing a miniature pony. Magicians were on TikTok, doctors teaching sex-ed were on TikTok, the NBC News was on TikTok, famous Instagram dogs were on there, too. And the self-made “microcelebrities” of Generation Z, like Bella Poarch, were on TikTok, filming themselves through a front-facing camera for their growing number of followers. As of October 2020, TikTok surpassed 2 billion mobile downloads worldwide, and now has more monthly users than Twitter.

TikTok is a social network that has nothing to do with one’s social network. When users go into the app, most will browse the “For You” feed, personalized through an AI system that tracks user behavior and serves up a never-ending slideshow of videos that hold your attention. If the attention-bot gets it right, you’ll end up liking, following or sharing the featured content, and the app reacts by giving you more of it — pressing the “heart” button on a few goofy cat TikToks will soon make your entire feed meow.

Although TikTok’s algorithm relies in part on user history and video-engagement patterns, the app is remarkably attuned to a person’s unarticulated interests. Like a waiter who recommends the dessert before you have even looked at the menu, TikTok predicts what you are likely-to-like, and practically orders it for you.

Charlie, 22, uses TikTok to promote his music and find “cool new tunes,” but soon found himself absorbed in accounts offering mental health advice. He ended up self-diagnosing with ADHD after seeing multiple videos that explained the symptoms. (Multiple psychologists have since warned about the dangers of TikTok mental health creators being confused for therapists, FYI)

And infamously, the app has a tremendous ability to keep users hypnotically scrolling through the speed-lane of DIY musicals, often for hours.

“TikTok keeps your interest just like an Atlantic City slot-machine where your brain is on dopamine and the buttons play the ding-ding-ding sound,” says digital psychologist Julie Albright.

The expectation of a “dopamine treat” brought on by an amusing video keeps us scrolling, and users never know which TikTok will bring the treat — sometimes it’s the first one, other times it’s the hundredth one. In psychology, says Albright, this is called “random reinforcement,” and it’s about delivering the most effective method to get you hooked, whether it’s the casino coin-machines or 10-second videos of strangers dancing to Cardi B’s “WAP.” In fact, a 2018 Harvard study compared social media to gambling with slot machines or using drugs like cocaine, in that they all affect the same reward centers of the brain.

The ever-evolving trends that come with snappy videos mean that only one week of TikTok can leave you wondering “just-how-much-did-I-miss.”

“I spent a week away from TikTok to study for my exams, and when I got back there were tons of videos about this girl who used a super-strong glue to make her wig stick,” says Irene, referring to the recently (in)famous “Gorilla Glue Girl,” whose aesthetical misadventure captured on TikTok quickly became an internet meme. (She ended up having the wig surgically removed from her scalp.)

TikTok’s marketing point is that it feels refreshingly fun, like it’s the last ray of sunshine radiating through the gloomy cloud of the internet — it is generally thought of as a place for goofing off rather than for politicized discourse often present on Twitter or Facebook. During the monotony of the pandemic, it gave some an outlet for creativity and a sense of community.

Similarly to other visual platforms, physical appearance and aesthetics have a large part in being successful on TikTok — whether it’s the bling bling filters or the meticulous video editing. (In 2020, FaceTune came out with a brand new app that allows users to  whiten their teeth and change the size of their eyes, nose and lips on their video selfies, which can later be uploaded to TikTok.) But commodifying attractiveness on an adolescent-driven app has raised safety and mental health concerns about the app.

In March 2020, reports of ByteDance internal training practices surfaced, directing moderators to keep videos showing “chubby” body shape, deformities and “ugly” facial looks out of the featured content. Instead, the team whose job is to supply the app with “Nice-Looking” videos were told to find inspiration in Instagram posts tagged “#BeachGirl.”

It is well-known that TikTok users skew young, and officially, over 60 percent of are GenZers aged 16-24. But according to internal documents, TikTok classified more than a third of its 49 million daily U.S. users as being 14 years old or younger.

Nadja, 22, is a casual TikTok user and says there’s no shortage of sexualized videos on the app. “I’m afraid it challenges the age of consent,” she says. “Watching 14-year-olds dancing in their pools half-naked gives me the creeps.”

In 2019, a British investigative program BBC Panorama edited pictures of an adult woman to make her look younger and created a mock account of a 14-year-old girl. Her posts were given hashtags (e.g. "#schoollife") to suggest her apparent age. Soon, the TikTok account was followed by a number of older men, with a 34-year-old sending her multiple, and sexually explicit, messages.

Following the BBC investigation, ByteDance was involved in a series of controversies. The app was banned in India for a short time due to “morality issues,” with the government citing concerns that TikTok was exposing minors to pornography and sexual predation.

The company then announced plans to hire more content moderators, and in 2020, removed millions of videos which promoted nudity or failed to comply with the terms and conditions of the app. But according to some sources, the moderators are slow to act. (The same year, a survey asked TikTok users aged 16-25 if they ever received nude or sexually explicit pictures through their app accounts — 96 percent answered “Yes.”)

Multiple studies link sexualization of young women with the most common mental health problems diagnosed in girls — eating disorders, low self-esteem and depression. Recently, some TikTok accounts have been reported to actively promote disordered eating and unhealthy weight-loss, with one profile saying “This is a warning. If you don’t like stuff about starving leave please.”

And young TikTokers overwhelmingly copy viral memes and trends, according to Albright. A recent “beauty” trend involved putting your finger to the tip of your nose and seeing if it brushed your lips, with hundreds of videos captioned with some variation of, “If your finger touches your lips, you’re attractive.”

Social media channels are notoriously hard to moderate, and the problems of TikTok aren’t new — YouTube has been found to feed potentially provocative content to possible predators, and over the years, Tumblr became infamous for promoting eating disorders. Even if platforms manually remove tags from videos, powerful algorithms (such as TikTok’s attention-bot) run on recommending videos which have been linked together.

The problem can be eased to a large extent if social media companies, including ByteDance, become more proactive in responding to complaints and removing potentially problematic accounts (or content.) But, as social media use increases rapidly and the audience becomes younger, users — and the parents of users — will also need to remain attentive.