What Quirk of the Brain Turns People Into Compulsive Hoarders?

Hoarders cannot stop themselves from accumulating stuff—even if they live in fetid, rotting homes that ruin their lives.

This excerpt is a sample from DISCOVER's special Brain issue, available only on newsstands through June 28. 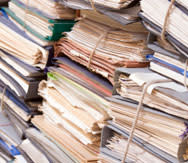 We could have found the apartment just by following the powerful musty odor that hit us as we stepped out of the elevator. When we got to the door, my guide knocked. No answer. She knocked again, then a third time. Finally, a small voice inside said, “Who’s there?”

“It’s Susan, the social worker. We’re here with the cleaning crew. They’re here to clean out your apartment.”

“Daniel’s not here,” the voice behind the door told us. “He went to get us breakfast.”

She opened the door a crack, and the door frame moved, almost imperceptibly. Yet it didn’t really move. The world seemed to shift, and I felt off balance for a moment. The door opened a bit wider, and then I saw them: cockroaches, thousands of them, scurrying along the top of the door to get out of the way.

The door opened the rest of the way. The apartment was dark, and it took a moment to appreciate what was inside. No floor was visible, only a layer of dirty papers, food wrappers, and urine-stained rags. A rottweiler bolted out of the back to see what was going on. He jumped over a pile of dirty clothes—at least they looked like clothes. From the edge of the door, the massive pile of junk rose precipitously to the ceiling, like a giant sea wave. It could have been part of a landfill: papers, boxes, shopping carts, paper bags, dirty clothing, lamps—anything that could be easily collected from the street or fished out of a Dumpster. It was one solid wall of trash 20 feet deep, all the way to the back of the apartment. There must have been windows on the far wall, but they were darkened by the broken fans, boxes, and clothing covering them.

Inside the condo the sweet, pungent odor of insects and rotting food enveloped us. Susan had instructed me to wear old clothes that I could throw out afterward. I was grateful for the advice but wished I’d also had a face mask—the heavy-duty kind.

I could feel the cockroaches surrounding me as I stepped in. The walls were coated with their brown dung, and occasionally one dropped from the ceiling onto the piles of debris below. I walked farther in to get a better look at the kitchen, or what I thought was the kitchen. It was impossible to tell, since everything was covered with bags. Food, mostly old and rotting, empty but unwashed tuna cans, and colorful coupons adorned the room. There was a path into the kitchen, though it was atop six inches of trash on the floor.

I was afraid to touch anything. I suddenly felt a great deal of sympathy for all the people I’d met with contamination phobias: This must be what it feels like, I thought.

Susan, the court-appointed guardian of Edith, who had struggled to open the door for us, had obtained a judge’s order for a “heavy-duty cleaning” because she believed that Edith’s health and safety were in danger, and no more moderate measure had succeeded in improving the horrific living conditions in the condo. Edith wasn’t responsible for these conditions. It was all her brother Daniel’s doing. And Daniel didn’t see anything wrong with the place. “All of this stuff we can use,” he insisted. “There is nothing wrong with our home.”

What brain circuitry may be involved in the development of hoarding? Researchers at the University of Iowa compared brain-damaged patients who began abnormally collecting things following their injuries to brain-damaged patients who did not collect. All of the abnormal collectors had damage in the middle of the front portion of the frontal lobes, while the noncollecting patients’ damage was scattered throughout the brain. The prefrontal region of the brain is responsible for goal-directed behavior, planning, organization, and decision making—all activities that represent challenges for people who hoard.

Brain scan studies provide additional information. Sanjaya Saxena, director of the Obsessive-Compulsive Disorders Program at the University of California at San Diego, found lower metabolism (an indication of the level of activity in that portion of the brain) among hoarders in regions of the brain roughly corresponding to those identified in the University of Iowa study. In particular, hoarders had lower metabolic rates in the anterior cingulate cortex, one region responsible for motivation, focused attention, error detection, and decision making.

Saxena’s study examined people’s brains while they were at rest, or at least not engaged in a task. Subsequent research has examined what is happening in the brain when hoarders try to make decisions about discarding possessions. Our colleague Dave Tolin at Hartford Hospital in Hartford, Connecticut, devised one such ingenious experiment. Hoarding patients and a control group who didn’t hoard brought their junk mail to the lab. Their brains were scanned while they watched a monitor showing the experimenter picking up their mail and holding it over a shredder. The subjects were then asked to decide whether the experimenter should shred or save the item. In contrast to what happened when their brains were at rest, hoarders had significantly more activity in areas such as the anterior cingulate cortex than control subjects did when trying to make the decision.

At this point, geneticists are betting that hoarding has at least some significant genetic cause, but exactly what is inherited is not clear. One possibility is that hoarders inherit deficits or different ways of processing information. Perhaps they inherit an intense perceptual sensitivity to visual details. These visual details (overlooked by the rest of us) give objects special meaning and value to them.

Or perhaps they inherit a tendency for the brain to store and retrieve memories differently. If visual cues (i.e., objects) are necessary for hoarders’ retrieval of memories, then getting rid of those cues is the same as losing their memories. Whatever is inherited, it is likely that some kind of emotional vulnerability must accompany this tendency in order for full-blown hoarding to develop.

Most people who hoard save things that don’t decay and aren’t particularly dirty, such as newspapers or clothes. In our study of hoarding in the elderly, we found that less than a third of the cases lived in squalid conditions. In younger samples, the proportion is even lower. But some people, like Daniel, collect dirty and rotting stuff that invites insects and rodents.

Daniel arrived about 30 minutes after the cleaning crew started working. He was 50, with a medium build and lots of energy. He complained about the crew’s starting without him and insisted that it was his job to direct the cleaning. Susan intervened.

She told Daniel that the place was unlivable and asked how it had gotten that way. Daniel appeared offended, but he also seemed to enjoy the prospect of an argument. He objected to her depiction of the apartment as unlivable and suggested that she didn’t understand the riches he had acquired. He was lucid and could not be considered out of touch with reality. Yet he seemed unable to tell us why he had collected all this stuff. When I asked where it came from, he insisted that his sisters had pressured him into collecting cans and bottles for the refunds and old packs of cigarettes for the coupons they contained. But very few bottles, cans, or cigarette packs were visible in the tidal wave of trash in the apartment.

Daniel spent most of the day insisting that there was nothing wrong with him, but for one short period he admitted that his collecting had become a problem. He talked about how he had tried to stop collecting, and how his family had tried to help him stop by telling him what he could bring home and in what quantity. Then, as quickly as his insight came, it was gone, and he was back to arguing with us about the unfairness of it all and about the incompetence of social workers.

We left at the end of the afternoon with the cleaning crew. Within a month, the apartment was full again. Daniel’s behavior did not change. He insisted that others misunderstood him and were misguided.

For those lacking insight into their hoarding, heavy-duty cleanings are seldom more than a short-term fix. The condition of the home may change temporarily, but the collecting behavior does not. Perhaps it would be impossible to get Daniel to stop collecting, but getting him to organize or store his hoard in a different manner might reduce the risk to Edith and the rest of his family.

In such cases, we encourage social services agencies, such as the one Susan worked for, to take a different approach. Instead of clearing out the home, we recommend working with the hoarder to determine what needs to be done to meet and sustain basic standards of safety. The effort requires the development of a personal and trusting relationship with ongoing contact. Though potentially costly, it may in the long run result in public savings by reducing the number of heavy-duty cleanings.

This excerpt is a sample from DISCOVER's special Brain issue, available only on newsstands through June 28.