What Is Your Inner Voice Saying?

Scientists have developed more sophisticated ways to eavesdrop on our internal dialogue. 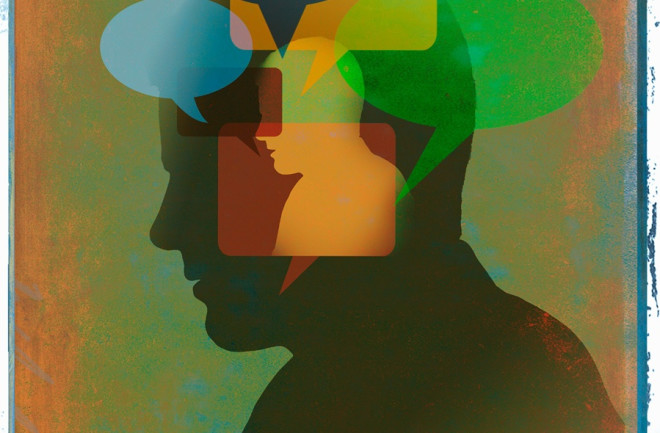 Halfway into my first marathon, a nagging ache begins to seep from my feet into my ankles. “The wheels are falling off the bus,” I yell as I pass my husband on the sidelines. I’m half-joking, but by the time I hit mile 20, the ache becomes a searing pain. Each time my sneakers strike the trail, the blisters on my toes threaten to rupture. I am in agony. The sound of Billy Joel blasting through my earphones isn’t loud enough to drown out the inner voice that says, “You can’t do this. You’ve failed.” My jog slows to a trot, and soon, I’m hobbling.

After the race, I start to wonder whether it was my body or my mind that gave up first. Could I have kept running if the voice had shut up? And what is this voice, anyway? Where does it come from, and why do we have it?

In search of answers, I begin combing through the scientific literature. One man’s name appears again and again: Lev Vygotsky, a Russian psychologist. He proposed in the 1930s that our inner voice evolves when we are still children. We first learn to use speech to communicate with others. Soon, we begin to speak to ourselves, too. We’ve all heard children talk to themselves as they build Lego battleships or whip up imaginary pancakes. Eventually, Vygotsky wrote, those private conversations begin to take place silently inside our heads.

Many people still subscribe to this theory, I discover, including Charles Fernyhough, a psychologist at Durham University in Britain who studies the relationship between inner speech and voice hearing. “Inner speech is just private speech that has been fully internalized,” he tells me. “The stuff that you do in your head as you’re running the marathon is basically a version of the stuff you used to do out loud as a kid.”

Because this dialogue is internal, it’s incredibly tricky to study. There are good reasons to think that, by attempting to observe this private experience, you invariably alter its content. Try having a thought and documenting it at the same time, and you’ll begin to understand the problem scientists are up against. That’s why even though scientists began wondering about the inner voice decades ago, few tried to rigorously study the phenomenon.

“They just thought it’s something that cannot be explored by science,” Fernyhough says. Even Vygotsky complained that “the area of inner speech is one of the most difficult to investigate.” But in recent years, several researchers have begun to really listen to the voices inside our heads. And they now have a clearer picture of what the inner voice is — and what it isn’t.

To better understand my inner voice and its inclination toward self-doubt, I approach Russell Hurlburt, a psychologist at the University of Nevada in Las Vegas. For the past four decades, Hurlburt has tried to make sense of our common inner experience by cataloging hundreds of individual experiences. He gives his subjects beepers programmed to sound an alarm several times a day as they go about their lives. When his subjects get a beep, they make a detailed record of what was going on internally at that moment. Then, at the end of each day, Hurlburt sits down with the subjects and interviews them. The interviews are key, he says, because people must be trained to capture their mental processes.

Often, Hurlburt finds, there aren’t words. Some thoughts take the form of pictures, sensations, or have no form at all. In fact, Hurlburt’s research suggests that inner speaking happens only in about a quarter of his patients’ experiences, and that its frequency varies widely from person to person. Some people don’t ever talk to themselves, while others seem to chatter nearly constantly. One of Hurlburt’s subjects reported that she was engaged in inner speech 94 percent of the times her beeper sounded.

Curious to hear Hurlburt’s thoughts on my inner critic, I begin to tell him about my marathon experience, but he stops me. “I have found on many occasions, maybe even most occasions, that people are mistaken about their own inner experience,” he says. That’s because people tend to assess their inner voices by reflecting on events after they occur, a process prone to bias. “I doubt that you have a really good reason to believe that your inner voice is as negative as you say it is,” Hurlburt says.

Could he be right? To find out, I try a slightly modified version of Hurlburt’s test. I dutifully record my inner voice for five days, but instead of carrying a beeper, I ask my husband to program my phone to automatically send me six text prompts over the course of a day. When I receive a message, I jot down what’s going on. Instead of meeting with Hurlburt daily, I talk about my experiences with my husband.

I've always assumed my inner voice babbles pretty much constantly, but often when the beep sounds, there are no words at all.Roy Scott/Ikon Images/Corbis

The experiment doesn’t provide any earth-shattering insight into my psyche, but it does confirm Hurlburt’s suspicions. Not once does the prompt capture my familiar inner pessimist. Instead of criticizing, the voice wonders if my adult-size head would fit into a child-size stocking cap; it pines for a time when we weren’t all glued to our cell phones; and it mentally composes an email to a contractor. I’ve always assumed my inner voice babbles pretty much constantly, but often when the beep sounds, there are no words at all.

So why does this inner voice choose to pipe up on some occasions and remain mute on others? Dolores Albarracin, a psychologist at the University of Illinois at Urbana-Champaign, says it typically appears “when you’re really worried, or really anxious.” Albarracin and her colleagues found that negative situations and internal struggles tend to elicit a “splitting of the mind” that transforms the inner voice into something of a surrogate parent. Rather than saying,

Inner speech also seems to help people perform certain kinds of cognitive tasks. Fernyhough and his colleagues asked children to play a game that involved placing colored disks on sticks to create a pattern while simultaneously repeating the word “Monday” — an activity designed to suppress the inner voice — or tapping their foot, which doesn’t affect inner speech. The Monday repeaters performed worse than the toe tappers.

The inner voice can be a harsh critic, as I discovered during the marathon. But James Hardy, a sports psychologist at Bangor University in Wales, says that typically, in the realm of sports at least, negative self-talk doesn’t necessarily have much of a detrimental impact on performance. In fact, a little negativity can sometimes “act as a bit of a kick in the backside,” Hardy says. Imagine you’re playing tennis, and you miss an easy shot. A negative inner tirade might motivate you to do better next time.

A year after my disastrous debut, I ran a second marathon. Rather than allowing a negative voice to derail my race, I selected a positive mantra, a phrase that might help motivate me. When my feet began to ache, I repeated these words: “You’ve trained for this.” It’s possible this phrase simply distracted me, or that repeating it blocked the negative words I might have said. But it’s also possible that these encouraging words helped me push through the pain. Either way, this time, I finished the race with a smile.

[This article originally appeared in print as "Talking Heads."]

Capture Your Own Inner Voice

To get inside people’s heads, psychologist Russell Hurlburt at the University of Nevada developed a technique called Descriptive Experience Sampling. His study subjects carry a beeper with them for about a week. When the beep sounds, they jot down a detailed description of their inner experience.

Curious about your own inner experience? Follow these steps to try a DIY version of Hurlburt’s process.