What if you are more likely to be a psychopath?

In the comments below Nathaniel Comfort asks:

What I do, as a historian, is take something apparently simple and make it more complicated. I wonder about how your curves, e.g., would be applied in real life. *Specific* couples, *particular* children–individuals, cases, persons, context. I’m asking things like: -What would your hypothetical psychopathic lovebirds do with that information? 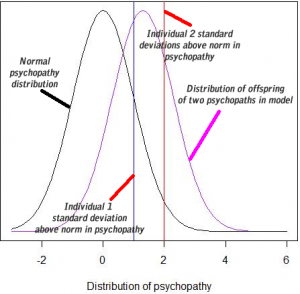 Comfort is referring to this figure I generated, which shows the potential distribution of outcomes for two individuals who tend toward more psychopathy than the general population. It seems to me that this question is easily answered if simply replace "psychopathy" with "odds for heart disease." Endophenotypes aren't magical, they're just sometimes hard to characterize. But once you get a good grip on them you can make standard quantitative genetic predictions. One of the points I wasn't clear about in the chart is that I assume that the "trait" being measured is the tendency toward psychopathy as measured by a paper & pencil test in one's youth. This does not entail that an individual in fact behaves like a psychopath. Rather, it simply implies that they're odds of behaving like a psychopath as an adult are highly elevated. I can't find the link, but there was a story (which I blogged) a few years ago about a scientist who was studying the peculiarities of psychopath brain structure...and found out that he himself exhibited the same morphology typical of a psychopath. The point is that changing the odds or loading the die does not entail that an outcome is determined. For example, imagine that you have a long family history of alcoholism. You marry another person with the same history. This sort of thing is heritable, and you've just loaded the die for your children. How can you try and compensate? I can think of one simple strategy: convert to a cohesive religious group which bans alcohol consumption, such as Mormons or Salafi Islam. The key here is that the social group is the environment. One can't likely change that given any environment one's children are more likely to be alcoholics, but the basal odds are shifted a great deal if you go from being a Catholic to a Mormon. Also, as a new parent, one thing that I have realized is that behavior genetic understanding of human nature is very useful, it tells us that "attachment parenting" is pretty much crazy. Really more of costly signalling for upper middle class couples than anything else (though less crazy than the 18th century French middle class craze for country wet-nurses which resulted in incredibly high infant mortality rates). Being raised in a Romanian orphanage fucks you up. Your parents, not so much. The "nature vs. nurture" debates are going to continue indefinitely. But parents are will continue to matter less on a day to day level than they think in relation to the outcomes of their children. You can get to set the ground-rules, but there's no way you will dictate the game.