What Does It All Ketamine?

Regular readers will know of my interest in the theory that ketamine is a rapid-acting antidepressant. I've blogged about developments in ketamine-depression research for several years now, my interest being spurred partly by my own struggles with depression. 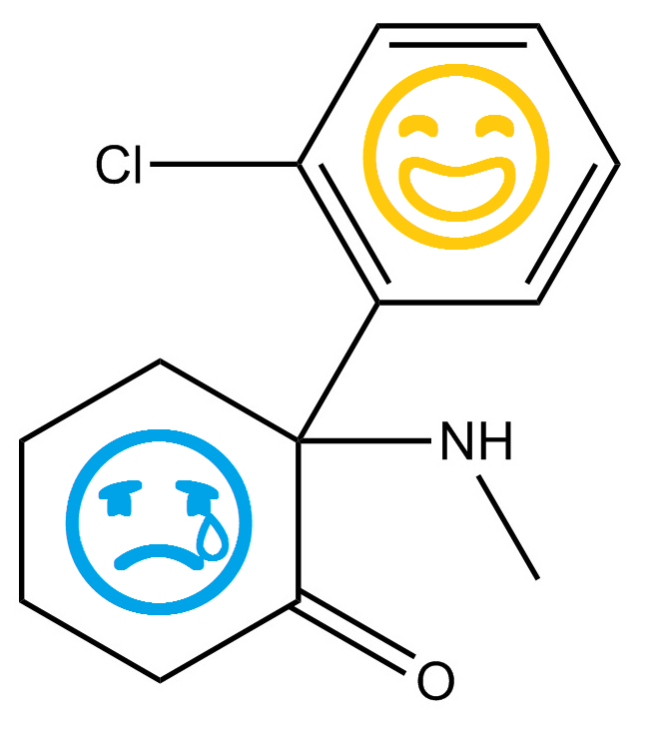 As I've said previously, the research on ketamine as an antidepressant is promising, but I do not think it is possible to say yet how ketamine works in depression. I think it is possible that ketamine's apparently powerful effects are a kind of psychological response, related to (but not limited to) the placebo effect, and driven by the striking subjective 'dissociative' effects of the drug. In this post I'll look at two new papers that relate to this theory. First off, we have Niciu et al. in the Journal of Affective Disorders. Niciu and colleagues report that acute experiences of 'depersonalization' in response to a dose of ketamine predicts the subsequent improvement in depression symptoms (HAMD17 score) after 7 days. Depersonalization is one of the effects of ketamine and it refers to a feeling of "detachment from the self". Other aspects of ketamine's effects, 'derealization' and 'amnesia', did not consistently predict the antidepressant outcome. 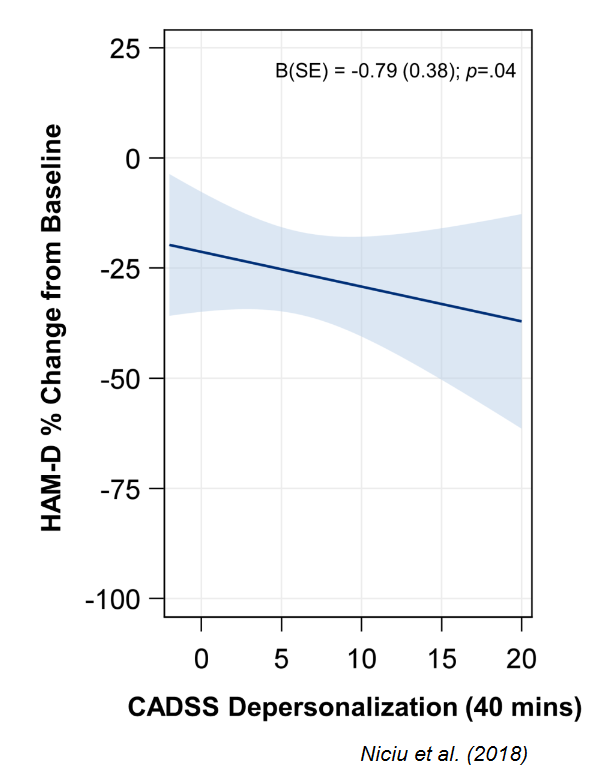 Niciu et al. propose a neurobiological explanation for this correlation - essentially, that the dissociative and the antidepressant effects of ketamine have the same molecular basis.

We hypothesize a potential causal link between Depersonalization and antidepressant response, initiated by glutamate receptor modulation

But, like me, they also acknowledge the possibility of dissociation-induced unblinding, driving placebo effects (although I think there may be even more going on):

Due to its psychoactive and sympathomimetic effects even at low doses, many patients can distinguish ketamine from an inert (saline) placebo... In this regard, both subject and staff unblinding may overestimate antidepressant response to ketamine in placebo-controlled studies, especially in subjects who exhibit more dissociative side effects.

Overall, this study is consistent with a 'psychological' interpretation of ketamine's effects - but it's also fully consistent with a purely neurobiological interpretation. In short, it doesn't distinguish between them. It is hard to see how any purely correlational study could settle this issue, which is why I think we need more creative study designs comparing ketamine to other drugs with profound mind-altering effects, like, say, mescaline.

Now, we come to the second paper. This one isn't actually a ketamine study, but it was inspired by the ketamine-depression model, and it comes from the same NIMH

lab as did Niciu et al. Writing in the Journal of Clinical Psychopharmacology,

describe a failed clinical trial of a drug called diazoxide

for the treatment of depression. The diazoxide trial was halted soon after it began because of 'severe adverse effects' caused by the drug, including headache, low blood pressure, pain, nausea, and more. Of the six volunteers who took diazoxide, five quit early because of the side effects, so the study was abandoned. What went wrong? Well, diazoxide's medical use is to lower blood pressure and raise blood sugar (by suppressing insulin). In physically healthy people, like the volunteers in this study, both of these effects are undesirable and probably account for the side-effects. Now, what does this have to do with ketamine? Well, Kadriu et al. report that they tried diazoxide because it is believed to increase glutamate reuptake (and thus decrease available glutamate) in the brain, making it a little bit like ketamine, which blocks glutamate receptors. So, although they are very different, the two drugs broadly share 'anti-glutamate' effects, leading Kadriu et al. to wonder if they share antidepressant effects too. So why am I blogging about this paper? Because to me, it illustrates why the debate over ketamine's mode of action matters. It matters because it determines the kind of research that is carried out. If the antidepressant effects of ketamine are a neurobiological consequence of glutamate receptor blockade, then studies like the diazoxide study make sense. If it's all about glutamate, then studying other glutamatergic drugs might reveal an even better antidepressant than ketamine. But if a psychological reaction to the dissociative effects is what makes ketamine work in depression, then everything changes. In this case, research on glutamatergic drugs would not be advisable unless they were dissociative (and diazoxide isn't.) On the other hand, non-glutamatergic drugs with powerful subjective effects might be worth a look. The psychology of the therapeutic experience (mindset, expectations, and interpretations) would also be of interest. This is why I disagree with the idea that 'who cares how it works? If it works, it works.' When we consider the big picture, including the research priorities, I think it really does matter how ketamine works.