What Color Is This Dress? Science Answers

It's Friday on the Internet, and we're all abuzz with the latest meme – but, happily, for once it's a meme with some fascinating science behind it. The question at hand, if you haven't been asked it already, is what color is this dress, below? The results are remarkably divided. An informal Buzzfeed poll indicates that about 75 percent of people perceive it to be white and gold. 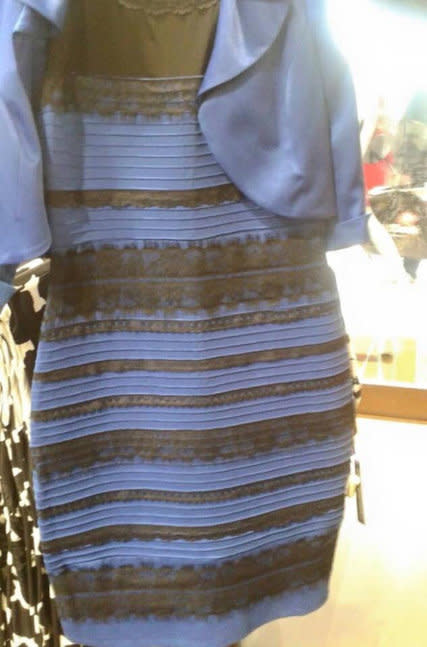 But, as the video above explains, other people see it as black and blue – which are indeed its true colors. What's going on? Well it appears that this snapshot hits a sweet spot of ambiguity, allowing our brains' color processing judgment calls to be laid bare. It depends, essentially, on whether you perceive the dress's lighting to be an overexposed, yellow light (which would lead you to conclude the dress is blue) or a bluish light perhaps cast by sunlight shining through a window (which would lead you to see white). It's a judgment call our brains make all the time, but rarely are we able to compare those judgments to other people so starkly. "I’ve studied individual differences in color vision for 30 years, and this is one of the biggest individual differences I’ve ever seen," Jay Neitz, a neuroscientist at the University of Washington, told Wired. It's just one example of how weird things happen to our color perception in colored light. "I used to own a red Volkswagen," Neitz told Vice. "I was out and it was dark and I was getting into my car. Someone next to me had just gotten into their car and put on their brake lights. When they did that, my car was illuminated just with the brake lights—and my car looked white!" So, what color do you see? And can you flip your perception? Tell us in the comments!