What Are Woodpeckers Doing to Their Brains? 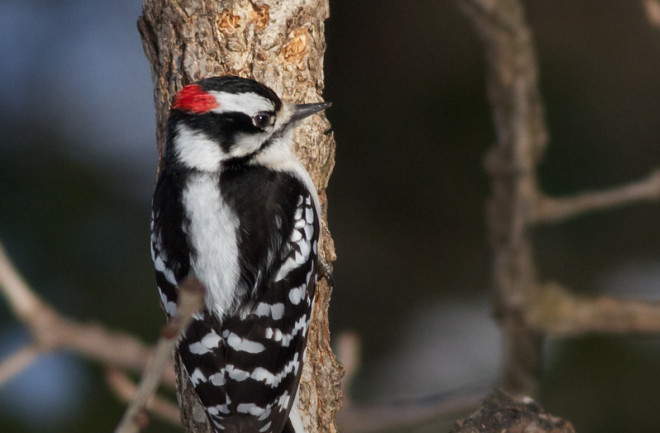 A downy woodpecker. (Credit: Arlene-Koviol/The Field Museum) Woodpecker brains preserved in ethanol feel a bit like modeling clay. That’s according to George Farah, a graduate student at Boston University School of Medicine who scooped the brains out of downy woodpecker specimens stored at the Field Museum of Natural History in Chicago. “Some were like angel food cake, it’s together but can easily be broken; it can easily fracture,” says Farah. “I have a lot of experience with preserved brains.” Farah, along with his Boston University colleagues Peter Cummings and Donald Siwek, was seeking an answer to a highly intuitive question: What happens to woodpecker brains after a lifetime of smashing their heads against wood? It’s a question that begets even more questions, but the answers could someday prove critical for neuroscientists who study brain trauma and disease.

Woodpeckers experience forces of 1,200 to 1,400 g’s every time they slam their heads into a tree or your home’s wooden siding. By comparison, rollercoasters top out at about 5 g’s and an extremely nasty football hit can reach 120 g’s. According to Farah’s math, a woodpecker might smack its head against something hard 54 million times in its lifetime. It’s no wonder engineers look to the woodpecker to design better sports helmets and padding. “Woodpeckers peck. It’s what they do. They've been around for some 25 million years so you wouldn’t think they’d be doing something harmful to themselves,” says Cummings. And it’s not as if scientists never pondered how woodpeckers avoid turning their brains into stew. However, most studies have focused on the woodpeckers’ protective biophysical adaptations. Woodpeckers, scientists have found, sport sharp beaks with upper and lower components that move independently while pecking. They have huge tongues that secure and cushion the brain during impact, and they have specialized skull bones that serve as internal shock absorbers. That much is plain to see. But few scientists have “peeked under the hood” to see what’s happening inside woodpecker skulls. Only one study from 1976, according to the researchers, examined the brains of woodpeckers to see if their head-banging ways caused real harm. At the time, those researchers found no trace of damage and concluded that woodpecker brains are “clearly” protected from injury. That study has been cited in over 100 journals since, but Farah says its conclusions are dubious. “The stain that they used was ferrocyanide, which back in the day was used for bone morphology research; it has nothing to do with brains at all,” says Farah. “The authors also chose not to do an actual histology (studying the microscopic structures of tissues) analysis. Why had no one tried to repeat this?” So Farah, who had grown weary of his thesis project, was eager to call an audible. He had stumbled upon a gap in woodpecker neuroscience research, and an opportunity to expand the corpus of knowledge was standing right before him. So Farah, Cummings and Siwek cobbled together an experiment in a condensed time-frame and on a shoestring budget of $2,000. First, they needed birds. That’s easier said than done.

Jars of woodpeckers. (Credit: The Field Museum) “You can’t just go to PetSmart and get a woodpecker. They're a protected species,” says Cummings. Fortunately, the Field Museum had exactly what they needed: a collection of woodpeckers and other birds preserved in jars. Now their work could begin.

They sliced the brains of 10 preserved woodpeckers along with 5 preserved red-winged black bird species, which served as controls, into slices thinner than paper. Researchers then used staining techniques to search for accumulations of tau proteins. Tau proteins in the human brain assist with construction and stabilization of neuronal microtubules, which provide structure for cells. And according to an increasingly mainstream theory, microtubules respond to events like a quantum computer and they may even serve as the seat of consciousness. In neurodegenerative disorders and brain trauma, tau proteins disconnect from axons and clump together into tangles that the brain can’t remove. These tangles could be the source of disease, though it remains unclear. There are different types of tau proteins—some harmful, some helpful—and elucidating their impact on brain health continues to challenge researchers. What’s clear is that tau accumulations have been observed in athletes with chronic traumatic encephalopathy (CTE), leading to an association between brain health and tau build-up. Farah used a modern staining technique to hunt for tau accumulation in woodpecker brains. Positive silver accumulations—an indicator of proteins—were found in 8 of the 10 birds tested, with most accumulations near the front of the brain where impact is the greatest. In two of the three birds they further tested, those proteins were confirmed to be tau proteins. Red-winged black birds, the control, didn’t show any signs protein accumulations. The researchers published their results Friday in the journal PLOS One.

We can’t come to any firm conclusions from these findings, however. First off, the sample size was incredibly small and not enough to establish a correlation between pecking and neurotrauma. And for all we know, tau accumulations may not be all that detrimental to woodpecker health. Farah says their study didn’t pin down the types of tau proteins they identified. Therefore, they can’t say if these tau proteins are helping the bird or harming it. They can only say that they are, indeed, there. “Our study was designed to just look,” says Cummings. “Maybe these accumulations are an evolutionary adaptation to protect neurons. We’re simply advancing science through observation.” Farah and Cummings say the next logical step would be to study the different flavors of tau proteins that accumulate in woodpecker brains and assess their impact. If anything, their study elevates the importance of woodpeckers in brain health research. Perhaps woodpecker brains have a special enzyme to clear harmful tau proteins and leave protective ones in place? Maybe there’s a cure for Alzheimer’s lurking in the brain of a woodpecker? With such tantalizing lines of research, it might be a good idea to take a closer look at woodpeckers. “We produced more questions than answers here, and we hope someone will take them on,” says Cummings.