WATCH: How the Brain Gets Its Folds 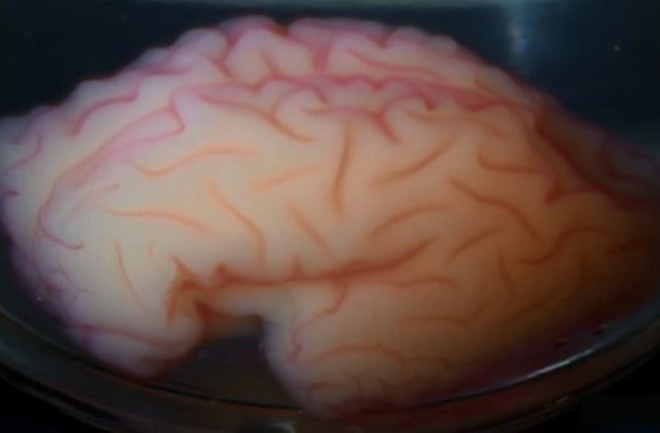 The gel model of the brain created by the researchers. (Credit: Mahadevan Lab/Harvard SEAS) Scientists performed some heady origami in the lab. In order to study how the brain forms its unique structure of folds and grooves, a team of scientists from Finland and the United States recreated the folding process with a 3-D printed, artificial brain. One could be forgiven for confusing their model with the real thing, and they published findings from their hyper-realistic simulation Monday in the journal Nature Physics.

Researchers constructed their smooth brain out of a silicone-based gel that mimicked a mammalian brain in its early stages of growth. They then coated their model with a layer of a different gel that would grow and expand when placed in a solvent. After spending less than 30 minutes in the solution, the brain model contorted into an eerily accurate reproduction of a human brain. As it expanded, the thin coating of gel mimicked the behavior of the cortex — the outer layer of our brains that produces those trademark folds. As it grew, it crumpled and twisted into deep grooves that increased its surface area, but maintained its overall shape.

The brain model before and after a swim in a special solution. (Credit: Tallinen et al/Nature Physics) The demonstration offers an explanation of the brain's unique structure that's grounded in physics, the researchers say, rather than biochemistry or genetics. Not all brains are folded like ours. Most animals, in fact, have smooth brains. Primates, whales and pigs are the only other members of the "wrinkled brain club." It is commonly held that the brain developed folds to increase its surface area while maintaining the same volume, thus giving us more processing power.