Julie Sedivy is the lead author of Sold on Language: How Advertisers Talk to You And What This Says About You. She contributes regularly to Psychology Today and Language Log. She is an adjunct professor at the University of Calgary, and can be found at juliesedivy.com and on Twitter/soldonlanguage. There’s been a good bit of discussion and hand-wringing lately over whether the American public is becoming more and more politically polarized and what this all means for the future of our democracy. You may have wrung your own hands over the issue. But even if you have, chances are you’re not losing sleep over the fact that Americans are very clearly becoming more polarized linguistically. It may seem surprising, but in this age where geographic mobility and instant communication have increased our exposure to people outside of our neighborhoods or towns, American regional dialects are pulling further apart from each other, rather than moving closer together. And renowned linguist William Labov thinks there’s a connection between political and linguistic segregation. 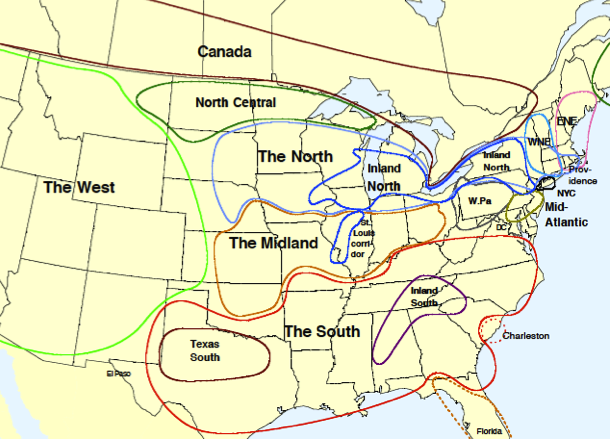 Dialect regions as defined by the Atlas of North American English

, Labov spends a great deal of time discussing a riveting linguistic change that’s occurring in the northern region of the U.S. clustering around the Great Lakes. This dialect region is called the Inland North, and runs from just west of Albany to Milwaukee, loops down to St. Louis, and traces a line to the south of Chicago, Toledo, and Cleveland. Thirty-four million speakers in this region are in the midst of a modern-day re-arrangement of their vowel system. Labov thinks it all started in the early 1800's when the linguistic ancestors of this new dialect began to pronounce "a" in a distinct way: the pronunciation of "man" began to lean towards "mee-an", at least some of the time. But it wasn’t until the 1960s that this sound change began to trigger a real domino effect. For many speakers of the northern cities, there were now no English words being pronounced with the original, now abandoned "a" sound. Since vowels evidently abhor a vacuum, this empty slot was eventually filled by the "o" sound, so that "pod" came to be pronounced like "pad" used to be. What ensued next was much like a free-for-all game of musical chairs involving vowels: "desk" has ended up being pronounced kind of like the former "dusk", "head" like "had", "bus" like "boss", and "bit" like erstwhile "bet." (You can listen to some examples here

.) This rearrangement, called the Northern Cities Vowel Shift, is the result of a chain reaction of vowel changes on an epic scale similar to the process that transformed vowels from Middle English to Modern English between 1400 and 1600. (Ever wonder why a word like "beet" perversely uses the same letter for its vowel sound as the word "bed"? The two words used to be pronounced with essentially the same vowel sound). The Northern Cities Vowel Shift is thought to be both spreading and accelerating. But one of the puzzles about this vowel shift is why it has spread through an area of 88 thousand square miles only to stop cold south of Cleveland and west of Milwaukee. And this is where things get political. Linguists have long known that mere exposure to new speech patterns isn’t always enough to cause people to adapt their own speech accordingly. Often, a “buy-in” is required; your own speech may shift depending on how much social affinity you feel for the speakers of these new patterns. This explains why, even within the Inland North Region, the spread hasn’t been uniform. For instance, African American speakers in the same region—or rural speakers for that matter—haven’t really warmed to the new-fangled vowels. But why is it that white city folk in Cleveland sound a whole lot like white people in Syracuse and Milwaukee, but a whole lot unlike their fellow Ohioans in Columbus, a short distance away? Labov points out that the residents of the Inland North have long-standing differences with their neighbors to the south, who speak what’s known as the Midland dialect. The two groups originated from distinct groups of settlers; the Inland Northerners migrated west from New England, while the Midlanders originated in Pennsylvania via the Appalachian region. Historically, the two settlement streams typically found themselves with sharply diverging political views and voting habits, with the northerners generally being more liberal. Labov suggests that it’s these deep-seated political disagreements that create an invisible borderline barring the encroachment of Northern Cities Vowels. When he looked at the relationship between voting patterns by county over the last three Presidential elections and the degree to which speakers in these counties shifted their vowels, he found a tight correlation between the two. And the states that have participated in the vowel shift have also tended to resist implementing the death penalty. Do vowel-shifters sound more liberal to modern ears? Yes, at least to some extent. Labov had students in Bloomington, Indiana, listen to a vowel-shifting speaker from Detroit and a non-vowel-shifter from Indianapolis. The students rated both speakers as equal in probable intelligence, education and trustworthiness. They also didn’t think they would have different attitudes about abortion (both speakers were female). But they did think the vowel-shifting speaker was more likely to be in favor of gun control and affirmative action. Are we moving toward an era where Americans will speak discernibly red versus blue accents? It’s hard to say. Social identities are complex, and can be defined along a number of different dimensions like class, race, or ethnicity. Not everyone feels that politics are a part of their core identity. But I suspect that political ideology may become an anchor for accents to the extent that large social groups collectively identify themselves by their political beliefs. According to Bill Bishop, author of The Big Sort

, this is happening more and more as Americans voluntarily cluster themselves into homogenous, politically like-minded communities. So perhaps it’s not surprising that George W. Bush acquired a distinct Texan accent, despite having abundant exposure to people from the Northeast, or why Barack Obama sprouted a mild set of Chicago vowels, even though he was fully an adult before ever living there. Whether consciously or not, these politicians may be flying their partisan flags every time they speak. And if accent becomes routinely melded with political affiliation in people’s minds, it may come to play an even stronger part in how people respond to political candidates. No doubt we’re already seeing the politicization of pronunciation in candidates’ speech. For instance, in 2008, Republican strategist Alex Castellanos remarked

about Sarah Palin’s Western accent: “We really haven’t heard this kind of accent before. This is an original voice that doesn’t sound like Washington, doesn’t sound like an insider, doesn’t sound at all like what we have. I think it sounds outsider.” I suppose if you want to market someone as a maverick candidate, she’d best sound like one. And I suppose that in the near future at least, any candidate with a claim to being a “true conservative” had best have speech that’s scrubbed clean of Northern City vowels, regardless of where he or she comes from.