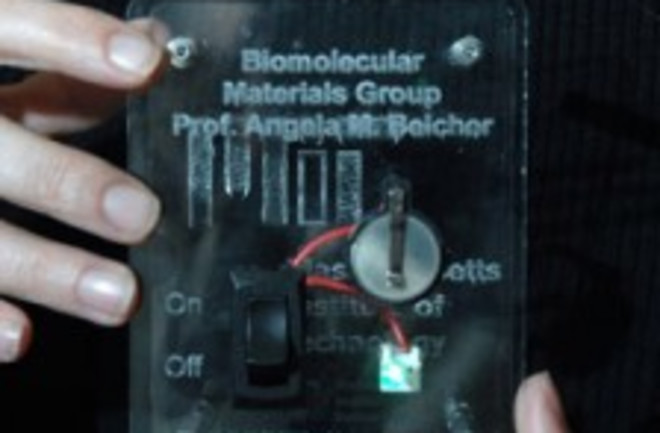 In a few years' time, recharging your handheld PC may be as easy as just slipping it into your back pocket. That is, as long as you don't mind having a virus cocktail woven into your pair of slacks. Yes, the humble virus--that tiny protein-coated bag of genetic material that we more commonly associate with global pandemics--could replace graphite and lithium iron phosphate as the material of choice with which to build the next generation of customizable, high-powered, lithium-ion batteries. Despite what you may think, this isn't actually such an unusual pairing. By virtue of their simple design (most only contain enough genes to encode a few dozen proteins) and infinite capacity for manipulation, viruses have become the favored go-to tool for scientists seeking to explore cellular systems and tinker with their underlying components. Gene therapists have been infecting bacterial, plant, and animal cells with viruses for years in order to shuttle in new genes and repair malfunctioning ones. In one recent application, a team of researchers led by University of Pennsylvania ophthalmologist Arthur Cideciyan restored sight to two blind individuals by injecting a virus equipped with a retinal gene into their eyes.For others, the appeal of viruses lies in their aptitude for genetic engineering. A little over a year ago, a group of MIT scientists led by Angela Belchersuccessfully transformed the M13 bacteriophage, a virus harmless to humans, into the cathode and anode of a lithium-ion battery. In 2006, the same team had tweaked several of the M13's genes to make it self-assemble into a negatively-charged paper-thin film that could be used as an anode. Constructing the cathode proved to be more of a challenge because the materials used to make it needed to be highly conducting—and most such materials tend not to be. To get around that problem, Belcher and her colleagues imbued the viruses with the ability to attract iron and phosphate along their thin, filamentous bodies and paired them up with carbon nanotubes to create dense networks of conductive material. Unlike conventional batteries, these can be molded to fit any shape and could eventually be sprayed onto a range of other devices. The virus batteries can also be assembled in a more environmentally friendly way: at normal room temperatures and without relying on toxic chemicals. The ease with which researchers can alter their properties—to change the battery's design or, say, to switch to a better cathode—by simply turning on or off one gene or another only makes them more attractive. This week at the American Chemical Society (ACS) meeting, Mark Allen, a postdoctoral researcher from Belcher's lab, reported that they had done just that—engineer the virus' genetic code slightly differently to make an iron fluoride cathode. That's important because the use of current lithium ion battery technologies is severely limited by their relatively low energy density. Metal fluorides have shown promise because they do a better job of maximizing energy density, particularly when used in the cathode. Their Achilles' heel is their cycle life, which is much shorter than existing batteries, but some research indicates that infusing them with oxygen could resolve that issue. Another research group led by James Culver from the University of Maryland announced that it had also made the parts for a lithium-ion battery by using the tobacco mosaic virus (TMV), which infects tobacco plants. In a study published this month, he and his colleagues demonstrated that their virus-built silicon anode had roughly 10 times the capacity of current graphite anodes. One advantage of Culver's design is that the batteries could eventually be grown (quite literally) in the field by farmers—though that is at least several years away. And while these batteries will initially be developed for the military to lighten soldiers' loads on the battlefield, there is no reason why they couldn't eventually make their way into your next shirt or pair of shoes. Perfect for when that invisible dress goes out of style.