A report that nerve stimulation was able to partially restore consciousness in a patient in a vegetative state has attracted a great deal of attention this week. 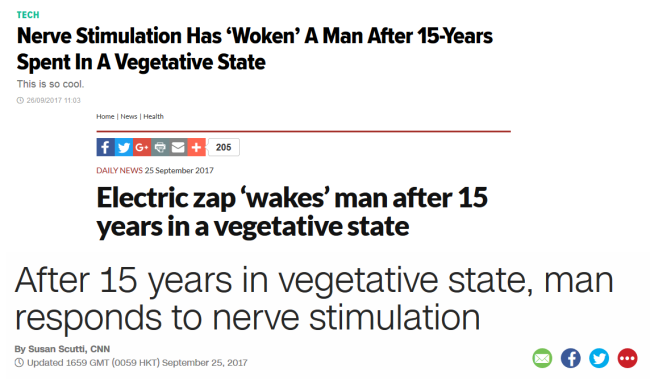 The paper, published in Current Biology from French researchers Martina Corazzol and colleagues, is certainly promising, but I didn't find it entirely convincing. Corazzol et al.'s patient was a 35-year old man who had been in a vegetative state for 15 years following a car accident. After receiving consent from his family members, surgeons implanted a device to electrically stimulate the patient's vagus nerve. Vagus nerve stimulation is a quite widely used technique for the treatment of epilepsy (and, experimentally, for depression), although its mechanism of action remains unclear. So what happened? After the stimulator was switched on, the intensity of the current was ramped up over a period of five weeks. The patient's level of consciousness, as rated by a clinician using the Coma Recovery Scale-Revised (CRS-R), increased around week four. The CRS-R scores are shown below as the red line, with stimulus intensity in blue. 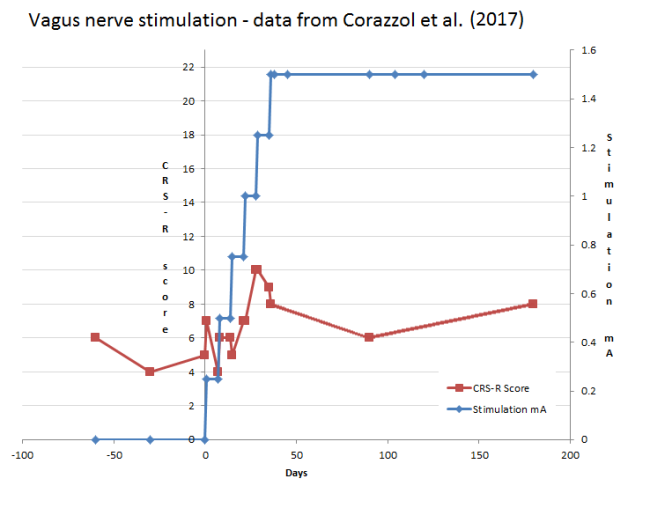 It can be seen that the increase in CRS-R scores was not entirely sustained. While the patient scored 10 on two consecutive days, he later dropped down to 6-8 points, even though the stimulation continued at the maximum 1.5 mA. A score of 10 still represents severe impairment: the maximum (best) score on the CRS-R scale is 23. Another reason to be a little wary of the CRS-R changes is that the there was no 'placebo' control condition. While a patient in a vegetative state is hardly likely to experience the placebo effect, the clinicians making the CRS-R ratings might. Corazzol et al. don't state that the raters were blind to the timing of the treatment. Corazzol et al. also used EEG and PET to measure the patient's brain activity and how it changed during the vagus nerve stimulation. These results showed:

The neuroimaging work is interesting from a research point of view, but what ultimately matters in a study like this are the clinical results. These were promising, but I think the headlines are over-optimistic. This is very much a preliminary study and the results seem mixed to me.