Research points to a modern surge in physique-related anxieties and obsessions in many individuals. The psychological ailment is less gender-bias than previously thought and possibly linked to the rise of social media. 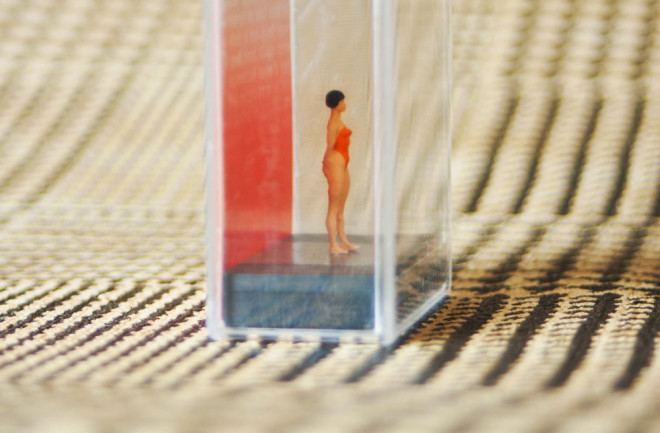 From time to time, whether our concerns are centered on the size of our nose or the placement of our eyebrows, we may look in the mirror and notice the parts of our bodies that generate feelings of self-consciousness. Although these insecurities can evoke minor unease, it does not typically obstruct our lives. But what happens when we feel that these insecurities become too difficult to handle? For one out of 50 people in the U.S. suffering from body dysmorphic disorder (BDD), these thoughts may become invasive and time-consuming, prompting the afflicted to spend up to several hours a day preening and covering up every loose hair, blister and acne scar.

David Veale, a psychiatrist at London’s Maudsley Hospital and co-author of Overcoming Body Image Problems, says that, “Other symptoms of BDD include spending large portions of time thinking about their perceived defect and asking unanswerable questions such as, ‘Why was I born this way?’ ” The surge of body dysphoria and physique-related anxiety is a public health problem, notably for youth and young adults worldwide. Concerns and related research have emerged exploring possible links between social media use — with its barrage of doctored images — and BDD.

What is Body Dysmorphic Disorder?

Our modern, clinically-informed conception of BDD comes from the DSM-5, which describes the illness as a “preoccupation with one or more perceived defects or flaws in physical appearance that are not observable or appear slight to others.” But Italian psychiatrist Enrico Morselli first delineated a similar condition, “dysmorphophobia,” in the late 1890s.

That disorder, according to Morselli, involved personal feelings of ugliness and inadequacy and other behaviors now associated with a BDD diagnosis. French psychiatrist Pierre Janet was another key practitioner who expressed interest in body-centered fixations. In 1903, he wrote of a case involving a French woman called Nadia, the 27-year-old descendent of a distinguished family at the time. She became overly perturbed about specific elements of her body and their apparent irregularities, including her red and spotted skin, feet, supposedly tall height and “long and ridiculous” hands. Overwrought with these anxieties and worries of being unlovable, Nadia felt compelled to withdraw socially, assuming a near hermit-like state in a cramped apartment for five years, later affirming in a statement to Janet, “If they saw me in plain sight, people would be disgusted.”

Like many people formerly and presently suffering from BDD, Nadia’s lurid view of her appearance was accompanied by numerous behavioral and psychological irregularities, namely social withdrawal and excessive anxieties about her complexion — common symptoms of BDD.

In today’s clinical framework, psychologists associate BDD with four diagnostic criteria: repetitive behaviors relating to comparing appearances to others, skin picking, mirror checking and seeking reaffirmation from others. The DSM-5 also notes that these preoccupations can engender high levels of stress, possibly impairing academic, vocational and social functioning. BDD is an ailment that is comorbid with other psychiatric disorders such as obsessive-compulsive disorder (OCD), social anxiety disorder (SAD) and depression.

Those with the condition may also develop an interest in remedying their perceived flaws with cosmetic procedures, such as rhinoplasty or breast augmentation. In fact, a research article published in Plastic and Reconstructive Surgery suggested that 7–15 percent of individuals who present to cosmetic professionals may be afflicted with BDD. Additionally, a 2010 study on 200 people with BDD found that out of 42 subjects who underwent a cosmetic procedure the rate of long-term improvements was just 2 percent. “Suicidal thinking and suicidal behavior are one of the most concerning complications of BDD,” says Katharine Phillips, a professor of psychiatry at NewYork-Presbyterian and Weill Cornell Medicine. “Tragically, many people with BDD have tried to kill themselves because they feel they look so ugly.”

Phillips published a study in 2007 that indicated about 80 percent of people with BDD experience suicidal ideation.

But what exactly causes BDD? “This is a complex question that we don’t have a complete answer to. But we do know that BDD is caused by a combination of factors — not by any one thing,” Phillips says. Mental health physicians have presumed that a varying melange of genetic, environmental and developmental factors may be responsible for its onset.

Of the environmental variables, an individual’s social media use and experience with bullying may contribute as additional stress factors. According to the nonprofit Mental Health America, body shaming and bullying — both online and offline — can impose adverse side effects on an individual’s physical self-esteem, potentially leading to social isolation from acquaintances. “Individuals rarely reveal their body image concerns due to high levels of shame, therefore, making BDD difficult to detect, diagnose and provide treatment for,” Veale says.

Although social media is not considered the sole cause of BDD, “[It] can help maintain or amplify the severity,” he adds. “Whilst individuals with BDD may take lots of images of themselves to analyze and check their appearance, or take photos until they feel like they look ‘just right,’ the role of this is not to share with others as on social media.”

Although social media is not a reliable representation of reality, these platforms can become a venue where sufferers compare their appearance to others. This might further amplify fears surrounding perceived flaws, often in the context of digitally altered, filtered and face-tuned images.

BDD has often been propagated as a disorder that impacts women. However, Veale says, “BDD is equally common in both men and women, and there are more similarities than differences in BDD between men and women.”

Research roughly 20 years ago indicated a significant increase in men feeling displeased with their appearances, with surveys suggesting the percentage nearly tripled in less than 30 years. Surveys have also found that men tend to be distressed about different attributes than females. One research paper concluded that men with BDD were more preoccupied with height and muscle mass, perhaps attributed to a compound of absurd beauty standards and external pressures from social media and TV. Terms such as “bigorexia,” “reverse-anorexia” or clinically, “muscle dysmorphia” have been applied in describing this phenomenon.

Usually beginning between teen years and early adulthood, some men with muscle dysmorphia, mainly those who regularly attend a gym, may develop eating disorder-like habits such as binge eating or excessively exercising to achieve their envisioned physique. In contrast, others may engage in the recreational ingestion of steroids and other substances.

Regarding concerns about height, some people may attempt to rectify these insecurities by undergoing bizarre, invasive stature-increasing surgeries, which first began as a means to correct medical deformities. This sometimes involves breaking the femur or tibia bone and slowly extending its length over a period of two to three months.

Since this disorder is bound to a person’s mental health, numerous psychoactive medications and psychological therapies may be applied in a person’s treatment. Phillips says that the prescription of certain drugs, such as serotonin reuptake inhibitors, also called SRIs or SSRIs, may be employed to eliminate the impairing symptoms of BDD.

“They include medications such as fluoxetine (Prozac), sertraline (Zoloft), and escitalopram (Lexapro),” she adds. “The SSRIs are usually well-tolerated, and they’re not addicting or habit-forming. There's a lot of misinformation about these medications online.”

Cognitive behavioral therapy (CBT) is also frequently used in regulating a patient's emotions and behaviors. The method ultimately works to alleviate distress caused by BDD through learning about and discussing harmful thinking patterns and working to develop coping skills. “The NICE (National Institute for Health and Care Excellence) in the UK guidelines recommend that BDD is treated using both cognitive behavioral therapy (CBT) and serotonergic antidepressant medications,” Veale says. A compound of CBT and exposure response prevention (ERP) can also act as a foundational pillar in an individual’s treatment. This involves being supported to give up comparing and ruminating, to confront their fears without their camouflage, and to stop rituals such as checking and excessive grooming.”