To Golf Like the Pros, Pretend You're Using Their Clubs 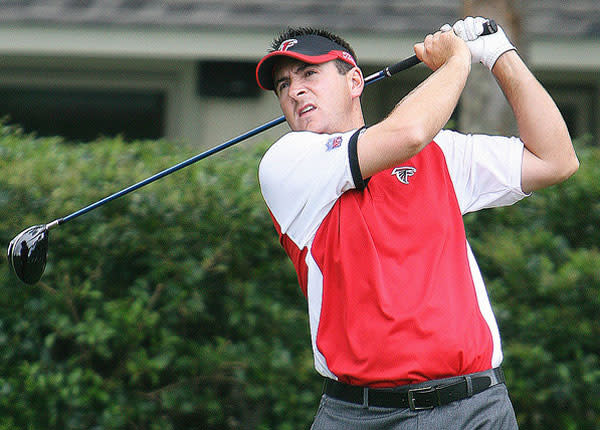 All that golfin' mojo is just oozing into that club...

worn by famous athletes. It's not very hard to convince people that something---beauty, saintliness, prowess---leaks from a famous person to the objects they used. But while magic is still not scientifically valid, you can apparently get something from such relics---if you believe. A new study reports that people who are told that the golf club they're using belonged to a pro athlete actually putt quite a bit better than people who are just told that the club is a nice one

. The researchers split forty-one college students who had golf experience and had followed the PGA tour into two groups, and told one group that their putter had been used by pro golfer Ben Curtis

. Out of 10 putts, those subjects sank 1.5 more putts than the control group, on average. How exactly this happens is an interesting question, and the researchers lay out several possibilities. They knew that people who picture themselves doing well on a task and being in control tend to do better than people who haven't

, and it's possible that thinking of Curtis' achievements and perhaps putting themselves in his shoes before they putted did something similar. It could also be that talking about Curtis could have "primed" the subjects to do better---priming

is a psychological effect by which experiencing one stimulus can make you respond a certain way to later stimuli. (If you haven't heard of the hot coffee/cold coffee experiments, one of the canonical---and mind-bending---examples of priming, get thee here

," the researchers points out. "Hence, believing that a professional used one's putter could have implicitly activated the concept of “skill” thereby improving putting performance." They point out that this looks similar to the placebo effect

---fake drugs, procedures, surgeries, etc. can still provoke a response in people who don't know that they're fake. But the mind is a complicated thing, and what connection, if any, there might be between placebos and a golf club anointed with good vibes from a pro is not clear. Ah, you say, but what about the possibility that something really did move from Ben Curtis to his clubs? That's easily dispensed with: The researchers were fibbing.