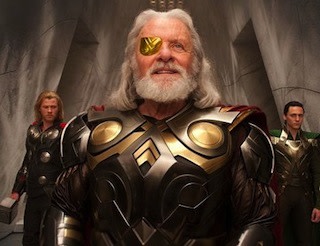 If you haven't seen it yet, Thor is a ridiculous and entertaining superhero spectacle. All the leads did a great job, particularly Hopkins as Odin. If you can take a man seriously when he's standing on a rainbow bridge wearing a gold-plate eyepatch, he's doing something right. Kenneth Branagh's interpretation of Asgard was visually overwhelming, but weirdly believable. The reason? Branagh leans heavily on the magi-tech rule of Arthur C. Clarke, which Natalie Portman's character quotes in the film, "Any sufficiently advanced technology is indistinguishable from magic." So what is the difference between really-really advanced technology and actual magic? Sean Carroll, who did some science advising for the film, clears the idea up a bit:

Kevin Feige, president of production at Marvel Studios, is a huge proponent of having the world of these films ultimately “make sense.” It’s not ourworld, obviously, but there needs to be a set of “natural laws” that keeps things in order — not just for Iron Man and Thor, but all the way up to Doctor Strange, the Sorcerer Supreme who will get his own movie before too long.

In short, the Marvel universe is internally consistent, which makes me all the more excited for the Avengers film. Clarke's rule of magical tech helps create some of that consistency. I both love and loathe Clarke for that statement. Love because it strikes at the heart of what technology is: a way for humans to do things previously believed not just implausible, but impossible. Loathe because it creates an infinite caveat for lazy authors and screenwriters. It seems like anytime some preposterous technology is injected into a narrative either as a McGuffin or a deus ex machina, that damn quotation from Clarke gets trotted out as the defense. So does Thor live up to Carroll's hopes or abuse Clarke's rule? To answer the question, we need to investigate Clarke's rule a bit further. There is a corollary to Clarke's rule: "Any technology distinguishable from magic is insufficiently advanced." By that measure, just how advanced are Asgardians? More than sufficiently. I knew Branagh wanted to explicitly avoid making Thor an actual magical god of thunder. And, because of that, I had so many damn questions about pretty much everything in the film. Why is Thor the only one who can lift Mjölnir? What is Odinsleep? Are Frost Giants aliens? How is Odin able to "take" Thor's powers? Needless to say, I was frustrated. And then I remembered the spirit of the rule. If I'm able to tell the difference, then it isn't advanced enough technology. But that doesn't mean we'll always perceive the Asgardian's abilities as magical. The best example of a good use of the tech-as-magic scenario is the Stargate series. In the Stargate Universe, the Gou'ald are an advanced alien species that use their highly advanced technology to overwhelm and subject less-advanced alien races. To the late 20th century humans who discover the stargate and utilize it, the equipment of the Gou'ald is advanced, but not magical. Yet to the Egyptians who were originally exposed to the Gou'ald, the tech was magical. As a result, the Gou'ald were worshiped as gods by the Egyptians and merely treated as advanced aliens by late 20th century Americans. That difference is critical to understanding why Thor isn't just using Clarke's law as a caveat. The parallel with Stargate (super-advanced race mistaken for gods leading to a mythologizing of their existence) allows us to understand just where the Asgardians sit in the Marvel universe. In essence, the technological gap between early 21st century human technology and the Asgardians is at least as large as the gap between the Egyptians and the Gou'ald. We've got a long way to go.

Thor, thankfully, does not as a film attempt to justify the science behind Asgard. Only two remotely scientific elements are relevant to the plot. The first is that Bifrost, the rainbow bridge (pictured), is a controlled "Einstein-Rosen Bridge" aka wormhole. A huge piece of machinery enables the cosmic transportation device to work. Asgardians get into the transporter, it spools up and then beams them to another realm. Second, Thor's hammer Mjölnir (which Kat Denning's mispronunciation thereof is comedy gold) was "forged in the heart of a dying sun." How that happened and why it makes the hammer so magical is never explained. Those are the only two references in the film that, from what I could tell, even pretended to acknowledge science. No effort is made to disguise the rest of the overtly magical and mythical elements of the Asgard. And that's a good thing. Thor does not pull a George Lucas and attempt to over-science the magical elements. Thor is not superhuman because he has some Norse equivalent of midichlorians. He is superhuman because he is magical. Sure, that magic is allegedly based in technology, but technology so incredibly advanced, we can't distinguish it from magic. That lack of distinguishability is the indicator of just how advanced the Asgardians actually are. It's also what let's us enjoy the movie for what it is. Don't try to understand how the Bifrost's gate works or why a wormhole needs a sword to activate it – just enjoy watching a hunky bearded man heroically smashes things with his magical hammer and while wooing a gorgeous theoretical physicist. It's magical!

Promotional Images for Thor via Paramount