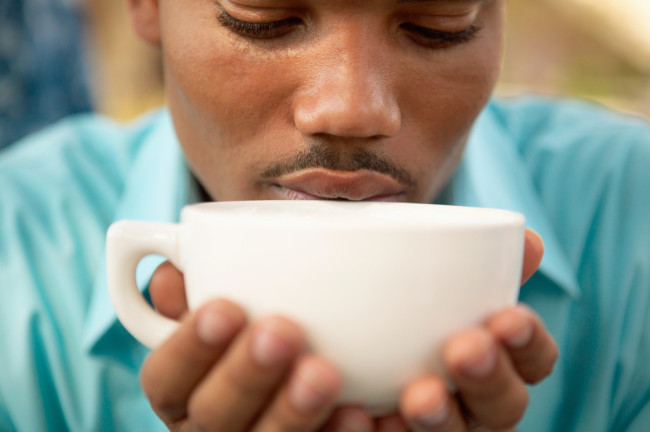 Have you ever caught a whiff of perfume and found yourself grasping for the words to describe it? You might link the scent with a memory of an old romance, or a specific place – but when it comes to specific words for scents, the English language leaves us with a pretty limited toolbox. Though we can distinguish and name colors with acuity – crimson from scarlet from burgundy – we're largely limited to vague scent terms, like “smoky” or “sweet.” But do distinctions between odor seem equally blurry in other languages? Linguists Asifa Majid of Radboud University in the Netherlands, and Niclas Burenhul of Lund Universty in Sweden, suspected that this isn't the case – and with good reason. The researchers knew that in at least one language – Jahai, which is spoken by certain Malaysian groups – words for smells are far more precise than those used by English speakers. So the scientists set up a series of experiments to test just how precise Jahai speakers’ scent concepts really are.

The researchers gathered a group of 10 native Jahai speakers between the ages of 20 and 60, and an equivalent group of 10 native English speakers. All the participants sniffed a series of smell samples from the The Brief Smell Identification Test – a survey that researchers have used to test scent sensitivity since the early 80s – and were asked to name each one as precisely as they could. Then the volunteers looked through a series of color swatches, and did their best to give precise names to each of those as well. Although the volunteers tended to describe each smell and color in their own words, it quickly became clear that Jahai speakers could describe colors and odors with equal precision, while English speakers showed much less aptitude for smells than for colors. While Jahai speakers' ability to distinguish smells averaged out just a few percentage points below their ability to distinguish colors, English speakers' odor-naming precision averaged out to less than one tenth of their color distinction specificity. Just as English has precise color terms like “mauve” and “cerulean,” Jahai has highly precise terms for smells – such as cŋεs, “the smell of petrol, smoke and bat droppings,” itpɨt, “the smell of durian fruit, Aquillaria wood, and bearcat,” pʔus “a musty smell, like old dwellings, mushrooms and stale food,” and plʔεŋ, “a bloody smell that attracts tigers.” English speakers, meanwhile, tended to rely on broader smell terms like “smoky,” “sweet,” “piney” and so on. The results

were published in the journal Cognition.

Debates about how much language sculpts human thought have raged since the 1930s, when linguists Edward Sapir and Benjamin Lee Whorf first put forth the hypothesis that we can only think about concepts we can name. And although the Sapir-Whorf hypothesis has fallen out of favor since the 60s, researchers have found that (for example) native Russian speakers can distinguish more subtle shades of blue

than English speakers can, while an African tribe called the Himba can tell apart many colors

that English speakers can’t – apparently because those cultures have more words to describe these shades. Even if language doesn’t strictly limit the concepts you’re able to think about, it’s still easier to notice distinctions if you can put them into words. Which means that if you take the time to recognize the nuances of your favorite scents, you may find yourself developing a more elaborate smell vocabulary of your own.

MindBinaural Beats: The Auditory Illusion People Claim Can Heal Your Brain
Recommendations From Our Store