The World at 7 PM: A Survey of Everyday Life

In the Journal of Personality, a new study reports on the uniformity of human experience around the globe: The World at 7: Comparing the Experience of Situations Across 20 Countries The research was an online survey of a total of 5447 people. Each participant was asked to think about what happened the previous evening at 7 pm. Then they were asked to describe the 7 pm scene by means of 89 statements (descriptors), which included things like: "Rational thinking is called for.", "Situation raises issues of power." and "Potential romantic partners are present." The participant had to place each statement in one of nine categories (ranks), from most to least accurate, based on how well they felt that statement applied to the previous evening. The descriptors were translated into 14 different languages for use in 20 participating countries. 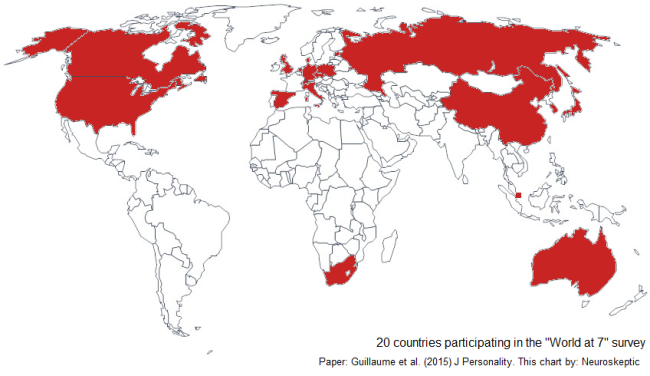 This statement-sorting approach is called the Riverside Q-Sort (RSQ) technique, after the University of California, Riverside, where the lead authors of this paper, Esther Guillaume et al., are based. Overall, the results showed that people's experiences of last night at 7 pm tended to be very similar, no matter where they lived. Considering the rank assigned to each statement by the average participant in each country, the mean correlation between any two countries was strong +0.84. The most similar two countries were the USA and Canada (+0.95). The most different pair were South Korea and Denmark, but even here the correlation was very strong (+0.73). Around the world, people's #1 description of the situation at 7 pm was "Situation is basically simple and clear‐cut." Other top-ranked descriptions were "Social interaction is possible." and "Situation is potentially enjoyable." The lowest-ranked statement was that someone "is being abused or victimized." So, in every country, people most commonly describe last night as being an uncomplicated, positive social event. No drama, just chilling. However, this doesn't mean that every individual person had the same experience every evening. Within each country, the correlations of statement rankings among individuals were quite low (around +0.20). The most homogenous nation was Japan. Is that a reflection of their 'East Asian culture'? It seems not: the country with the most diverse experiences was South Korea. Finally, the authors looked for associations between cultural characteristics and experiences. This exploratory analysis should be taken with a pinch of salt (because multiple comparisons), but it seems that people in "individualistic" nations are more likely to report that their 7 pm situation "raised issues of power" and featured "small annoyances", while they were less likely to say that it involved an "opportunity to express unusual ideas or points of view." Overall this is a fascinating study and a rich dataset. But while the sample was drawn from five continents, the participants were not selected at random: all of them were students or 'members of college communities'. What's more, all of the participating nations were politically stable and at least middle-income. Is life so generally happy in Iraq, South Sudan, or Haiti? Most likely, none of the participants in this study were acutely threatened by war, poverty, or disease, which makes them unrepresentative of humanity in general. Link: Try "The World at 7" here: click English (US), and logging in as a guest with Study ID amtest1, Participant ID am001. Results are not saved.