The Unnatural History of Making People 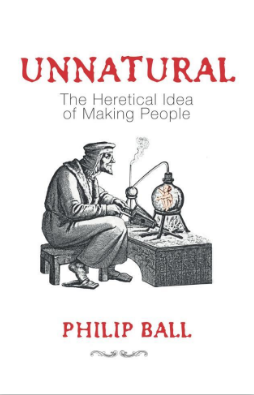 Philip Ball's new book, Unnatural: The Heretical Idea of Making People gets into the mythological underpinnings of our concerns about making people. Nature's Chris Mason reviews [gated] Unnatural and makes a striking observation:

Even today, Ball points out, societal and cultural debate is pervaded by the belief that technology is intrinsically perverting and thus carries certain penalty. Views that human cloning will be used for social engineering, eradicating one gender or resurrecting undesirable figures from the past, for example, all reflect age-old fears about the consequences of meddling in the 'unnatural'. Ball warns that, as there is no global ban on human reproductive cloning, there is a strong chance that it will happen. It is thus likely to become a de facto reality without the well-informed debate it deserves.

Let's unpack that little nugget, because it contains two very important points. The first point is that many of our fears about advancing science and biotechnology related to the body trigger fundamental, core cultural fears. Leon Kass calls this the "Yuck" reaction, or, more eloquently, "Wisdom from Repugnance." Kass' argument is that we are naturally repelled by abhorrent ideas, like torturing babies and eating people. As regular readers of Science Not Fiction know, eating people isn't always bad. Well, as it turns out, Leon Kass' argument that we should trust our gut when it says, "yuck!" is a pretty terrible way to do ethics. Why? Because what is "yuck" to me might be "yum" to you. And we're back to not knowing if doing something ethically questionable, like cloning people, is morally permissible. Unnatural at least explains why so many people say "yuck" to modifying humans; it is a lesson we've been told over and over for millennia in myths and religion. The second point is that we should be discussing these ideas like rational adults. Biotechnology is progressing at a rate and in ways that are so rapid as to be unpredictable. I make lots of educated guesses and suppositions, but none of what I write here is a prediction or a guarantee. My interest is in figuring out whether or not something like cloning is ethically permissible if we're ever able to do it. As Ball notes, there is no current global ban on cloning. There is, as it stands, no global ban on most of the transhumanist issues, from eugenics to cognitive enhancers to A.I. to nano-implants. These possible technologies strain the very foundations of many of our philosophies and cultural institutions. If the lack of a global ban means the technology is likely inevitable, we better figure out how to go about things correctly. Debate and discussion are essential to making good decisions. Recognizing our old, deep seated prejudices and biases, such as those against technology and making people, is equally essential. Simply because something is unnatural does not mean it is immoral. But that's where the discussion starts, not where it ends ends. Image of Book Cover via Bodley Head