Racism has shades of gray, strokes cancel nicotine addiction, what makes a human brain, and more. 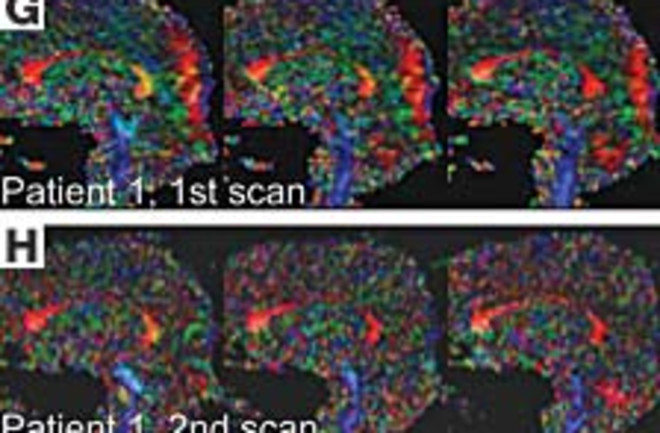 Courtesy of the Journal of Clinical Investigation

For 19 years after a car accident that caused severe brain damage, Terry Wallis lingered speechless in a minimally conscious state, a limbo only a few steps up from a coma. Then one day in 2003, he stunned his mother by calling her "Mom" and, over the next few days, regaining the ability to talk. Nicholas Schiff, a neurologist at Weill Medical College in New York City, was amazed when he examined Wallis's brain eight months later.

In July Schiff and his colleagues reported that Wallis's brain was badly atrophied — but it had not been idle. Using a technique called diffusion tensor imaging, which can spot neural connections, the researchers saw what appeared to be massive tracts of new axon growth. Wallis's brain had been rewiring itself.

During the year after he regained his speech, Wallis continued to improve, recovering some use of his limbs. A second scan made 18 months after the first one found that his brain was still changing. The first exam had seemed to show thick areas of new connections in the rear cortex of his brain, a region linked to awareness. A year and a half later, those areas looked more normal, and the cerebellum, which controls motor function, showed major changes, consistent with his recent physical improvement.

Schiff's ongoing studies of Wallis and his astounding recovery may transform our understanding of the brain's ability to heal itself. Neurologist Steven Laureys of the University of Liège in Belgium, who has studied similar cases, says, "This is very welcome, because there's so little we know about these late recoveries."

Study after study has shown that black defendants are more likely than white ones to receive the death penalty. But according to a paper published in Psychological Science in May, it's not just whether you're black that matters in capital sentencing; it's also how black you look.

After gathering photos of defendants eligible for the death penalty, all convicted in Philadelphia between 1979 and 1999, Stanford University psychologist Jennifer Eberhardt and her team asked students to rate how "stereotypically black" each person looked. The subjects knew only that they were seeing pictures of black men, not criminals. The researchers then compared the "blackness" ratings with the convicts' sentences.

Eberhardt found that 57.5 percent of defendants rated as stereotypically black (with traits including darker skin and a broader nose) had received the death penalty, compared with only 24.4 percent of those judged less stereotypically black. These percentages held only when the victim was white. Eberhardt speculates that black-on-white cases cause jurors to think about the crime as a conflict between races, not individuals. As a result, race becomes an extra factor in their decision making.

Scientists have long sought a connection between intelligence and some structure in the brain. In March they finally found a significant correlation, one seen only during childhood development.

How much of this is inherited? "The impact of the brain interacting with the environment during this time of plasticity is the key," Giedd says. "It's very hard to sort out all the family influences and varying educational opportunities."The brain's cortex, where complex reasoning occurs, can begin to thicken with the approach of adolescence, then thin again toward its end. The pattern correlates with a child's IQ scores, says psychiatrist Jay Giedd of the National Institute of Mental Health. In smarter children, the cortex grew more quickly and thinned more quickly over the course of the study. In kids of average intelligence, certain parts of the cortex showed steady thinning right from the start.

At the DNA level, humans and chimpanzees are about 98 percent alike, yet the human brain is three times bigger and far more complex than the chimpanzee's. To find out why, David Haussler of the University of California at Santa Cruz compared the human and chimpanzee genomes. By looking for areas with distinctively rapid mutation, his team hoped to pinpoint a human genetic signature — stretches of DNA where change has been selected for over the 6 million or 7 million years since the two species shared a common ancestor. In September they announced they had found key clues to human brain evolution.

Many of the regions are near genes known to be involved in brain development and function. One provocative finding is that the strongest evidence of selection is in HAR1, which lies within a gene that doesn't make a protein as most genes do. Instead, it makes an RNA molecule that is present during early in utero brain development and may orchestrate the migration of cells that build the human brain. The results are preliminary, Haussler cautions, but he considers it "a tantalizing hypothesis" that HAR1 is involved in the changes that led to our bigger, more complex cortex.The comparison turned up 49 places where an accelerated rate of mutation stood out in the human genome. Geneticists call them HARs, for "human accelerated regions." Many of the changes in these regions "probably happened quite a long time ago, since they are fixed in the entire human population," says Haussler. In some cases, he says, "we've sequenced hundreds of human samples, and they're present in every one."

The brain damage caused by certain strokes may have a surprise benefit: It can eliminate an addiction to nicotine. A research team led by Nasir Naqvi, a graduate student at the University of Iowa, and Antoine Bechara, a neuroscientist at the University of Southern California, discovered the phenomenon in patients whose strokes had affected a part of the brain called the insular cortex. Smokers who had suffered such an injury were 300 to 400 times more likely to quit the habit than those with lesions anywhere else.

Unfortunately, relief from cigarette addiction is far from the only result of this type of stroke. Damage to the left insular cortex and surrounding regions results in aphasia — difficulty in speaking and in understanding language — and damage to the right insular cortex can cause a flat emotional affect. That poses a daunting challenge for any effort to tap deliberately into the insular cortex to treat addiction. "It's good to know there's a part of the brain you can aim at," Bechara says. "What's needed now is targeted therapy so that you disrupt the behavior you don't want without producing unwanted side effects."

Two studies released in September offer clues about how you understand and empathize with others when you hear them speak — or even when you just know what they are doing.

Multitasking brain cells, known as mirror neurons, fire each time you prepare to make a move, like picking up and opening a can of soda. The same neurons activate when you simply see another person open the can. But what if you only hear them open it? You still empathize with the other person's actions because mirror neurons also react to sounds, reports neuroscientist Christian Keysers of the University of Groningen, Netherlands.

In a series of brain-scanning experiments, Keysers and his team identified a set of neurons in the premotor cortex that lit up when volunteers heard someone munching on potato chips or ripping paper. The same neurons flashed when the subjects performed similar actions themselves. People who displayed particularly strong activity in response to the sound cues alone scored higher on a questionnaire gauging their ability to put themselves in another person's shoes. Mirror neurons "transform what you see or hear other people do into what you would do yourself," Keysers says. "You start to really feel what it feels like to do a similar action."

Mirror neurons also respond to the written word, according to researchers at UCLA. Simply reading a phrase like "biting the peach" triggered the same premotor circuit in subjects as did watching a video of someone chomping on the fruit. It's as if the brain itself simulates the action while grasping the meaning of the words, says neuroscientist Lisa Aziz-Zadeh, now at the University of Southern California, who led the study. Scientists and philosophers traditionally place our higher cognitive powers in a realm distinct from that of our senses and actions, but, Aziz-Zadeh observes, the faculties "are intrinsically tied to the flesh."