In a provocative new paper, a group of UCLA biologists say that the leading theory for how memory is stored in the brain needs a rethink. But is it really time to throw out the textbooks? In their study, published in Elife, authors Shanping Chen, Diancai Cai, and colleagues examined the formation of synapses, connections between neurons. They used neurons from Aplysia, a sea slug whose rather simple nervous system is popular among learning and memory neuroscientists. 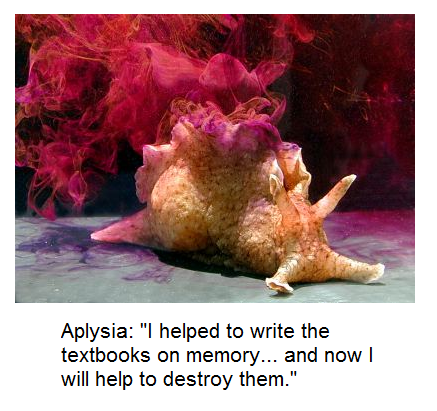 Chen, Cai et al. took two neurons from an Aplysia, one sensory and one motor neuron, and put them together in a dish. When placed together these two neurons spontaneously grow synaptic connections. Repeatedly adding 5HT (serotonin) to the dish caused these connections to strengthen - a primitive form of 'learning' called long-term facilitation (LTF). The number of synaptic connections (called varicosities) between the sensory and the motor neuron increased rapidly after 5HT 'training'. This is textbook stuff. Things got rather interesting, however, when Chen, Cai et al. studied the individual varicosities. They found that 48 hours after a 5HT 'training' session, many of the new varicosities that had been formed during training had disappeared. Even some of the original varicosities, the ones that had existed before the training, had also vanished. These 'lost' connections were however balanced out by lots of new varicosities, so the total number of connections stayed the same 48 hours after training. This is hot because it suggests that

a 'memory trace' was not stored in the form of synapses.

Rather, it suggests that the sensory neuron itself has a memory of how many synapses it ought to be forming - with the actual synapses being merely an expression of this memory. This is pretty radical: it amounts to saying that the location of memory is not in the synapses, but (probably) in the cell nuclei of presynaptic neurons. Chen, Cai et al. ran several other experiments that they say provide evidence against synapse-based memory in Aplysia. For example, they trained Aplysia to be sensitive to repeated mild electric shocks. It's known that this memory (long term sensitization, LTS) can be 'erased' with the help of a drug that blocks synapse formation (a protein synthesis inhibitor). This eliminates the extra synapses that are thought to constitute the memory. However, strikingly, Chen, Cai et al. show that the memory isn't actually erased. They say that it can be reactivated by means of a "reminder" stimulus (the green line on the graph below), which implies that the memory wasn't really lost when the synapses were destroyed. Rather, they say, the non-synapse memory must have persisted inside the neurons themselves. 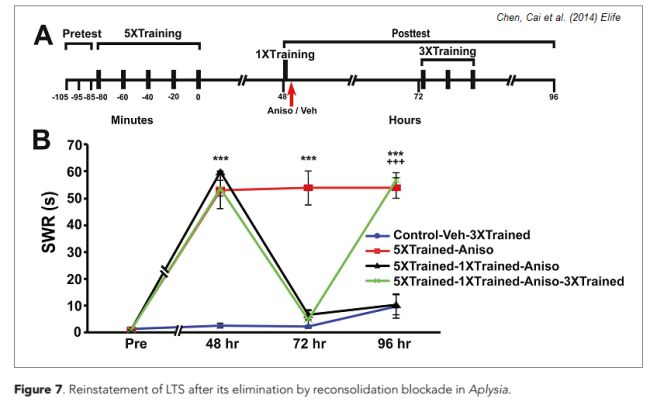 Long-term memory (LTM) is believed to be stored in the brain as changes in synaptic connections... Here, we show that LTM storage and synaptic change can be dissociated... These results challenge the idea that stable synapses store long-term memories.

But there's a big problem here. Sure, it's biologically plausible that a neuron could 'remember' the total number of synapses that it forms e.g. via epigenetic regulation of some gene(s) that promotes synapse formation. That would be very cool and Chen, Cai et al.'s results are very cool. The problem, however, is that a given neuron may form synapses with thousands of others, and it matters which of these connections are strong and which are weak. The pattern, not the total, is important. Yet there's no known mechanism by which a neuron could store a molecular 'map' of its own connections and their differing strengths. To put it another way, while it's easy to see how a neuron could 'store' a scalar variable using epigenetics, it's much harder to imagine that it could store a vector of values. In the case of Aplysia, this 'vector problem' doesn't really arise, but that's because Aplysia has a minimalistic nervous system. It's hard to see how Chen, Cai et al.'s non-synaptic memory could work for mice or monkeys, let alone humans. The authors do acknowledge this point:

Could a nonsynaptic storage mechanism based on nuclear changes mediate the maintenance of associative memories, particularly those induced in complex neural circuits in the mammalian brain, where a given neuron may have 1,000s or 10,000s of synaptic partners? An obvious difficulty confronting any hypothetical nuclear storage mechanism in the mammalian brain is how the appropriate number of connections can be maintained in a synapse-specific manner after learning has occurred.

However, they have no answers for this crucial question. Here's all they say about how it could be resolved:

Possibly, there are nonsynaptic ways for neurons to communicate that ensure specificity of associative synaptic plasticity in the face of the significant lability of synaptic structure documented here.

This is entirely speculative, and in my opinion, there's no need to posit an unknown (and on the face of it, implausible) non-synaptic signalling mechanism between cells. Rather, it would be more parsimonious to assume that Chen, Cai et al. have discovered a system for dynamically regulating overall synapse density at the level of single cells. This one-cell mechanism might suffice for memory storage in simple nervous systems like Aplysia, but in humans the Chen-Cai process might be involved, not in memory per se, but in synaptic scaling - an interesting phenomenon that the authors don't discuss, but I think that their discovery might help illuminate it. Sadly, the media coverage of this paper has glossed over these concerns, helped along by a rather optimistic press release. According to the media, these results might well be relevant to humans and could lead to new hope for dementia patients. Here's HuffPo's take for instance (where the word "Aplysia" doesn't occur until paragraph #5)

New research offers a glimmer of hope for patients in the early stages of Alzheimer's... There may be a way for lost memories to be restored in the brain... "As long as the neurons are still alive, the memory will still be there, which means you may be able to recover some of the lost memories in the early stages of Alzheimer’s", [senior author] Glanzman said.

Frankly, this is a gigantic leap that goes far beyond what Chen, Cai et al. actually found. Until the 'vector problem' is resolved I see no reason to throw out the textbooks just yet.