The Strange Rise of Neuromarketing

On Twitter, someone linked me to this: the Neuromarketing World Forum (NWF) 2016, which has just taken place in Dubai (which the conference organizers call "the Neuromarketing Capital of the World"). It was a three-day event dedicated to the application of neuroscience in the world of marketing and business. Attendees were taught about how brain science could help them understand what consumers want and how to sell to them more effectively. 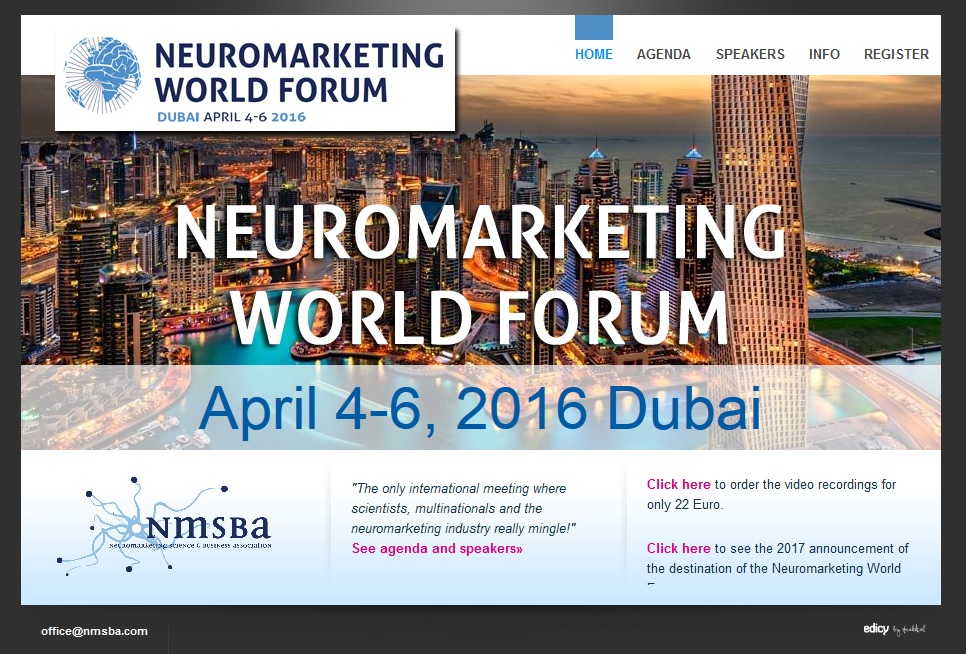 But where, in all this, were the neuroscientists? I didn't attend the NWF. Nonetheless, the website contains the full agenda. It features speakers such as

But as far as I can see, there were no academic neuroscientists speaking. The only academics present at the NWF were from the field of management and marketing studies. No speakers are listed as being affiliated with a university neuroscience or psychology department. (Edit: although a reader pointed out that Ale Smidts, one of the management professors, has collaborated with neuroscientists and published in Neuron.) So a large international 'neuroscience' event has taken place, without the help of any neuroscientists. This is remarkable. I don't mean that as a criticism of the NWF. I'm just surprised that this is now the world we live in. Ten or even five years ago, I don't think it would have happened. Indeed the first NWF meeting was in 2012; and back then the speakers list was headed by neuroscientists. How should neuroscientists react to neuromarketers? It's easy for us to mock people who use words such as 'brainology', and it's easy for us to decry them when their work doesn't match up to academic standards. But are we, neuroscientists, responsible for creating this monster, or at least for feeding it up on a diet of neuro-hype? Could neuromarketing actually represent an opportunity for doing better and more rigorous research? One of the limitations of academic neuroscience is its distance from real-world behaviour. Notoriously, most neuroscience experiments are run on college students - not a very diverse bunch. Could the neuromarketing scene serve as a bridge by which neuroscientists could find more realistic populations (e.g. employees at large organizations, user databases) in which to test our theories?