The Sperm Crisis: A Tough Nut to Crack

Bad food, bad genes, and monogamy are sucking the life out of human sperm. But conceptive gels and stem cells could bring some virility back. 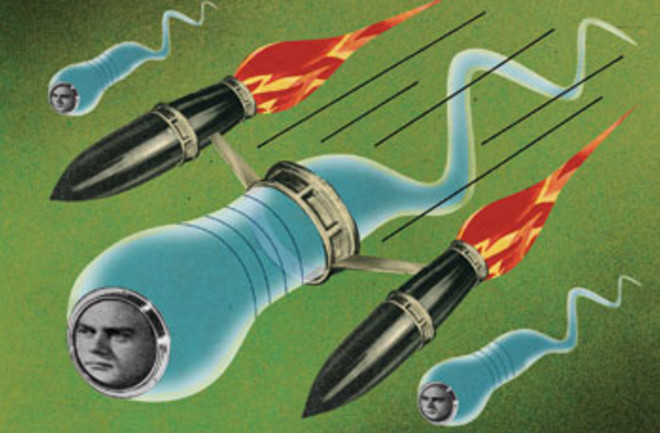 "If we keep fixing the problem in 10,000 years no men will be producing sperm," says urological surgeon Sherman Silber. illustration by David Pluckert

I refuse to age gracefully. That is to say, I refuse to age at all, other than for accounting purposes and to get discounts, which seem to kick in at movie theaters and hotels at 62—six years away. This applies to my sperm as well. I fully intend to maintain excellent spermatic health into my nineties, at least. It’s not just that my hard-wired imperative to perpetuate my genes is driving me to keep my options open; I’m not claiming my genes are anything special. It’s more the principle of the thing. Allowing any part of my body to fade just because I don’t strictly need it anymore is a slippery slope.

Admittedly, my motivation may smack of vanity, but in the case of sperm we all have good reason for concern. While the evidence is a bit inconsistent, some medical researchers insist that human sperm are going downhill and have been doing so for at least a century. Men appear to be making less sperm on average, several studies report, and what is made tends to be subfertile, which the World Health Organization describes as sperm that swim poorly, take on a funny shape, fail to reach concentrations higher than 15 million per milliliter, or otherwise struggle to impregnate an egg.

“We’re producing pretty poor sperm compared with those of primates and other mammals,” says Gary Cherr, a reproductive toxicologist at the University of California, Davis. “Even in the most fertile men, there are quality issues.” A recent European report found that one in five young men has underachieving sperm. That is probably one reason why in vitro fertilization (IVF) is becoming increasingly common, with 4 million humans worldwide already owing their existence to the procedure.

Good thing technology is watching our backs, right? Well, maybe. While certainly a blessing to the estimated 219,000 American couples with intractable infertility problems, IVF is both a measure and an enabler of men’s failure to be competent caretakers of their sperm. Or so charges Harry Fisch, a urologist and researcher at Weill Cornell Medical College in New York City, who has pretty much dedicated his career to keeping sperm robust, plentiful, and effective. He believes that reproductive technology all too often becomes a convenient fail-safe for couples seeking to postpone parenthood as long as possible. “It’s best to make babies in the bedroom,” Fisch insists, “and if fathers expect their sperm to be up to the job, they need to be in the best shape of their lives.”

Epidemiology studies have linked low sperm counts not only to aging but also to being too fat, being too thin, lack of exercise, excessive exercise, junk food, soda, exposure to toxins in food and air, and use of both prescription and nonprescription drugs, including tobacco and alcohol. “I can tell much more about a man’s health by his sperm count and belly size than I can from all the blood tests men usually get at the doctor’s,” Fisch says.

In keeping with his professional conviction that “the testicle is the future,” Fisch’s frontline treatment pushes his patients to embrace a healthier lifestyle. Fix a seemingly infertile guy’s bad habits and get him off medications he doesn’t really need—including increasingly popular testosterone supplements, which shrink the testicles and impede sperm production—and in about one-third of all cases, that guy will end up being able to do his share of the procreative job, Fisch claims.

In addition, some 40 percent of the men who show up in his office have varicoceles, or varicose veins of the testicles, and these, too, impede sperm production and quality. This wormy problem can be corrected surgically. An infection of the prostate or urinary tract—another common sperm blocker that typically goes undetected—can be cleared up with antibiotics or, in more severe cases, surgery.

But some of the blame rests with society and its failure to shape itself around biological contingencies. The genes that control the sperm-making machinery are all packed into a single chromosome—the Y chromosome, the one that confers maleness. When a cell divides, chromosomes line up with similar mates such that if one chromosome is scrambled, it can use its counterpart as a template for repair. Unfortunately, the X chromosome lacks sperm-producing genes, so the Y chromosome is unable to autocorrect. “It’s molecularly programmed to degrade over time,” says Sherman Silber, a urological surgeon and researcher who heads the Infertility Center of St. Louis at St. Luke’s Hospital. In most species that degradation is countered by female promiscuity and intense male competition, which ensure that only the highest-quality sperm fertilize an egg and perpetuate their DNA. Human society’s precipitous rush toward monogamy and non-mortal-combat-based dating rituals have therefore been an unmitigated disaster for the Y chromosome. Sperm have let themselves go because they can.

While human technology has brought about some of our current troubles, nature’s own biological technology has not been kind to the modern sperm either. For example, there is a gene that outfits a sperm with the armor it needs to muscle past the intense hostilities it can face in its swim into the cervix and toward the egg. This protein coating is electrically charged, allowing it to repel the also mildly charged cervical mucus, invoking a sort of parting of the sea. The coating also festoons itself with sugar molecules that blind the woman’s antibodies to the foreign nature of the sperm, heading off a massacre. “It’s kind of a Klingon cloaking device,” says Cherr, who has been studying the sperm coating in a variety of mammals for years (somebody’s got to do it). But when Cherr and his colleagues finally got around recently to checking out the protein in humans, they got a big surprise: About a quarter of men don’t make it properly because they have a mutant version of the relevant gene.

The lack of the coating isn’t by itself a showstopper. It makes men on average only about 12 percent less likely to conceive, according to a study of 500 couples in China. Given all the other quality-control problems with human sperm, though, the additional handicap of having to charge in naked may be more than enough in many men to diminish the chances of conceiving from “barely likely” to “forget about it.” Cherr notes that “a lot of men seem to have enough healthy-looking sperm but are still unable to conceive. I think the mutation may account for this unexplained infertility.”

As for why evolution wouldn’t have long ago snuffed out this genetic thorn in the side of fertility, Cherr suspects the mutation may also confer some yet-unknown advantage, the way the sickle-cell gene provides malaria protection along with the risk of a deadly blood disease. In any case, some positive intervention may be possible here. Cherr thinks it should be fairly easy to make an artificial version of the protein coating that could be applied before sex as a sort of pro-conceptive gel.

Surgery may offer other options to the estimated 1 percent of American men who don’t seem to produce any sperm at all. By using high-powered microscopes to root around the testicles of their patients, fertility doctors have found that most of these men do in fact produce sperm—but only a few, instead of millions, and not nearly enough make it into the semen. Fisch and Silber have already mastered the technique of hunting down what may be a man’s lone sperm and harvesting it for in vitro implantation in an egg.

The next step, Silber says, will be harvesting stem cells from around a “spermless” man’s testicles, introducing them into cultures where the cells multiply, and then reimplanting those cells in the man’s testicles, which then nurture them into fully mature sperm-producers. “We’ve already got it working in mice,” Silber says. In theory, human stem cells could be harvested and frozen now and unfrozen years or decades in the future, when the maturing process is perfected. So a 56-year-old male—to pick a random example—could get some testicular stem cells removed and stored, secure in the knowledge that he’ll have plenty of good sperm available when he’s 116.

A small hitch: Silber notes that enabling infertile men to procreate perpetuates infertility genes, digging us in even deeper. “I’ve calculated that if we keep fixing the problem, in 10,000 years no men will be producing sperm,” he says. I’m OK with that. Even I might not be alive then. Though I do feel bad that my grandchildren may have quite a problem.

David H. Freedman is a freelance journalist, author, and longtime contributor to DISCOVER. You can follow him on Twitter at dhfreedman.