Bad experiences can be powerful learning aids for our sense of smell. A new study reveals that electric shocks can make people more sensitive to the differences between very similar chemicals that previously smelled identical. 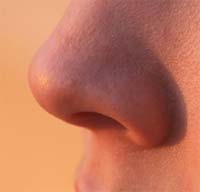 Every day, thousands of different molecules waft past our nose. Many of these are uncannily similar and some are more important to others. Wen Li from Northwestern University wanted to see how people learn to distinguish the critical smells from the unimportant ones.

Working in the lab of smell guru, Jay Gottfried, Li attempted to train 12 volunteers to smell the difference between a pair of enantiomers - molecules that are mirror-images of each other but are otherwise identical. The two chemicals were versions of 2-butanol and both had a grassy tang. At first, Li asked volunteers to sniff the odd one out between three bottles, two that contained one molecule and a third that contained its mirror-image. On average they scored 33%, no more accurate than complete guesswork.

Their scores more than doubled when Li gave the volunteers an electric shock whenever they were exposed to one enantiomer, but not the other. Li didn't provide any shocking impetus for a second pair of mirror-image molecules and accordingly, this control pair remained indistinguishable throughout the experiment.

Li backed up these findings with scans of the volunteers' brains. She used a technique called functional magnetic resonance imaging (fMRI) to show that their learning experiences were mirrored by changes in their posterior piriform cortex (PPC), a part of the brain involved in learning new smells.

At the start of the study, sniffing both forms of 2-butanol triggered similar patterns of activity in the PPC. After the shock, these patterns became more distinct, even though the overall level of activity in the region stayed the same. In contrast, the patterns for the rose oxide molecules remained strongly coupled throughout the study.

We've known for decades that a shocking stimulus can condition an animal towards certain types of behaviour, but this study clearly shows that it can also make an animal more sensitive to the stimulus in question.

Clearly, animals benefit from being able to discern the smell of danger and ignore unimportant odours. As Li herself put it, the whiff of a 175-kg lion is more "biologically meaningful" than that of a 3-kg housecat and it pays to be able to discriminate between the two. Animals that can do so can maintain just the right level of vigilance.

However, it's also important not to be overly selective - that could lead to equally catastrophic errors, if important information is ignored. Li thinks that another network in the brain helps to deal with this. Two regions - the amygdala, involved in emotions, and the orbitofrontal cortex (OFC), involved in associative learning - never grew to discriminate between similar scents to the extent that the PPC did. Shock or no shock, neither region showed different patterns of activity in response to different enantiomers.

To Li, these results reflect the existence of two networks that work together to drive the most suitable behaviour. The first is a sensory network, which includes the PCC, that learns to react selectively to threats, and the second is an emotional one, including the amygdala and OFC, that is more sensitive and indiscriminate.

In a tantalising final paragraph, Li suggests that anxiety disorders might stem from faults in the first network that hinder a person's ability to distinguish between important sensations and irrelevant ones. Without this skill, individuals could find themselves constantly on edge, overreacting to a wide range of sensations including those of little consequence.

Have a look at the video below for more ground-breaking work on conditional learning: