The Rise of Climate Anxiety

Climate change is a systemic issue, so it can be difficult for any one person to address the impact it has on their mental health. Experts weigh in on ways you can process climate anxiety. 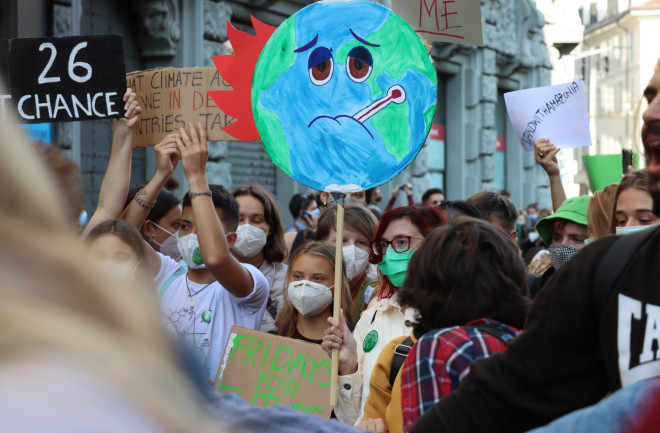 Climate activist Greta Thunberg, 18, and others during the pre-COP26 summit in Milan, Italy, on October 1. (Credit: Federico Fermeglia/Shutterstock)

Climate change is often seen as a problem for the future, an ever-approaching threat that will have catastrophic impacts decades down the road. But for Generation Z and younger millennials who have come of age in the 21st century, steadily rising temperatures and extreme weather conditions are the only reality they’ve known. And as droughts, floods, heatwaves and powerful storms affect more people around the globe every year, the impact climate change has on their psychological well-being has become a growing topic of concern and study among researchers.

In September, a team of researchers at the University of Bath in the U.K. published a preprint of the biggest scientific study on climate anxiety to date — it surveyed 10,000 people, aged 16 to 25, from 10 different countries on their thoughts and feelings about climate change. Respondents overwhelmingly reported that they were worried to some degree, and more than half reported experiencing anger, sadness or guilt because of climate change. Over 45 percent of participants stated these feelings had a significant negative impact on their everyday lives.

"These responses are completely understandable,” says Elizabeth Marks, a clinical psychologist and lecturer at the University of Bath who co-authored the study. “We feel sadness and grief when we lose things, and we've already lost things because of climate change. We feel fear and anxiety when we're under threat, and there isn't a clear way to avoid or stop what's happening with climate change. That's what climate anxiety looks like."

The researchers collected responses from France, Finland, Portugal, India, Nigeria, the U.K., the U.S., Australia, Brazil and the Philippines. These countries were chosen to reflect both the Global North and Global South and to encompass a wide range of income levels, population levels, vulnerability to climate change and experiences with extreme weather effects. The results indicated that less wealthy countries tend to have the highest levels of anxiety and the most negative thoughts and beliefs about climate change. Generally speaking, these countries are also the ones most heavily affected by climate change.

“One of the criticisms of [climate anxiety] is it's just a problem for the worried well,” Marks says, speaking of those who have the supposed time and energy to worry about the changing climate more than other issues. “I think we've really clearly shown that this isn't the case."

According to Emma Lawrance, a researcher at Imperial College London who specializes in youth mental health work and was not involved with the study, climate change-related extreme weather events disproportionately hit lower-income communities — particularly indigenous communities, which conversely tend to have contributed the least to the climate crisis. This has the effect of exacerbating already existing inequalities in health and in mental health.

Lawrance says she became interested in researching the mental health impacts of the climate crisis after noticing how it impacted her own childhood home. She hails from Adelaide in South Australia, which is surrounded by many regions that experience bushfires. During a visit in 2020, she awoke to the smell of smoke as a result of the severe bushfires that occurred in the early months of that year.

While Lawrance’s family has remained relatively unaffected by the warming temperatures of the region, the impact that the drying climate has had on the wildlife around the city nevertheless took a toll on her mental health. “Seeing how things are changing, and what we’re losing,” Lawrance says, “and grappling with those losses and my anxieties about the future started to mesh with my work with other young people and working with youth mental health charities.”

In terms of direct impacts, higher temperatures are linked to increased suicide rates and hospitalizations for mental illness. Those with diagnosable mental illnesses who are on medication are also more likely to die in a heat wave. In addition, people and communities that experience natural disasters such as fires or floods caused by climate change can develop post-traumatic stress disorder (PTSD) or depression, particularly if the event results in the loss of a home or a forced migration. According to Lawrance, when a natural disaster happens, the amount of people who are psychologically affected can be more than 40 times the amount of people physically injured.

Lawrance adds that even people who are not directly affected by climate change can still feel intense “eco-anxiety,” as their awareness of the impacts that climate change is having on the world develops into feelings of hopelessness, fear and distress. These feelings can impact their relationships with others and the ability to sleep, as well as cause chronic stress. In the most severe cases, children and young people have reported feeling suicidal as a result of their eco-anxiety.

People of any age can feel the effects of climate anxiety, of course, but most research on the topic currently focuses on young people. Lawrance says it can’t be definitely proven that younger generations experience more severe climate anxiety, but anecdotally many young adults feel helpless and powerless regarding climate change because they lack traditional positions of authority to enact change — and have a sense of betrayal towards older generations and governments that have failed to act on the issue. “There is this kind of generational gap that I think can exacerbate, understandably, their feelings of distress,” she says.

Because climate change is a systemic issue rather than a personal one, it can be difficult for any one person to address the impact it has on their mental health. However, there are ways to process climate anxiety in a healthy manner.

Lawrance recommends finding spaces and networks to discuss feelings regarding climate change; by having their feelings and emotions validated by a community, Lawrance says people can work through how they’re feeling and avoid the more severe effects of climate anxiety. Organizations that provide spaces like these include the Good Grief Network, Climate Cafés and Force of Nature.

Getting involved with grassroots climate advocacy organizations can also help people combat the sense of helplessness and lack of control that climate anxiety is often associated with. “These emotions, they’re not necessarily a bad thing,” Lawrance says. “They can be part of an empathetic response to what is going on.”

Although individuals can certainly take actions to alleviate their personal climate anxiety, Marks stresses that responsibility for the issue largely falls on global governments. Climate anxiety will continue to be an issue so long as climate change is an issue, so Marks says governments must listen to climate scientists and use their input to determine how to address global warming.