A ridiculous number of science-fiction TV series and films have moments where characters exchange minds, from the brilliance of Quantum Leap to the latest season of Heroes. Body-swapping is such a staple of imaginative fiction that it's tempting to think that it has no place being scientifically investigated. But Valeria Petkova and Henrik Ehrsson beg to differ - while actually exchanging minds is clearly impossible, these two scientists have created an illusion that can make people feel that another body - be it a mannequin or an actual person - is really theirs. 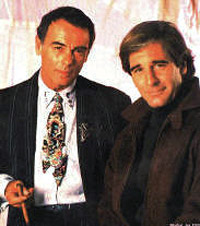 The idea that our bodies are part of ourselves is so obvious and permanent that it seems ridiculous to consider any other alternative. But some people do suffer from brain damage that prevents them from accurately recognising their own limbs, or causes them to experience out-of-body experiences. The sense of bodily ownership can even be deceived in normal, healthy people, through the use of illusions.

The most famous of these involves a rubber hand - by stroking it at the same time as a person's real hand (which is hidden from view), you can convince them that the rubber one is actually theirs. The illusion shows that timing is important. So is point-of-view - in a previous experiment, Ehrsson showed that he could induce an out-of-body experiment in the lab by combining the simultaneous stroking of the rubber-hand illusion with virtual reality headsets to show people views of their own backs.

Petkova and Ehrsson have now taken these illusions to a new extreme, tricking people into thinking that an entire body, rather than just a mere hand, is their own. The delusion is so powerful that the person can shake hands with their own real body without breaking the spell.

The duo gave 32 young adults a mannequin's-eye-view of the world, by asking them to wear head-mounted displays connected to cameras mounted on a mannequin's head. The experimenter then used a short rod to simultaneously stroke the volunteer's stomach and the mannequin's. The volunteer felt the movement on their own body while seeing the same movement on the artificial stomach.

The trick worked. The recruits' responses to a questionnaire showed that they sensed the touch of the rod on the mannequin's stomach and, more importantly, that the mannequin's body was their body. And as with the rubber hand, stroking the real and artificial stomachs out of time ruined the effect and broke the illusion. If you think that these views are incredibly subjective, you're not alone - Petkova and Ehrsson wanted a more objective measure of the success of their illusion too.

With that in mind, they threatened the mannequin with a knife and found that the recruits reacted as if their own body was in jeopardy. Their anxiety manifested as sweat, a thin layer of moisture on the surface of their skin that improved its ability to conduct a small current. This "skin conductance response" is reflexive and largely beyond the influence of conscious thought - it was an objective sign that the illusion worked. Nor was it a general response, for threatening the mannequin with a harmless spoon had no effect.

As proof that the recruits had body-swapped rather than simply "stomach-swapped", Petkova and Ehrsson found that they could induce the illusion just as easily by stroking hands instead of stomachs. And even then, "cutting" the dummy stomach with a knife triggered a skin response. The deception was a body-wide one.

The mannequin was an essential part of the trick. It proved impossible to convince people that they had jumped into a chair or a box of the same size, no matter how well-timed the experimenter's strokes were. That's important - it rules out simple conditioning as an explanation for the illusion.

So you can fool people into thinking that they've body-swapped with something, as long as it looks vaguely human. And amazingly enough, that includes another actual person. As the ultimate test of their illusion, the duo duped a fresh set of volunteers into thinking that they had swapped bodies with Petkova herself. This time, she wore a helmet with cameras attached and stood opposite the volunteer, whose headset fed them a view of what Petkova saw. The two then squeezed each other's hand at the same time, so that the volunteers saw themselves shaking their own hand. They could clearly recognise themselves, but still the illusion worked. 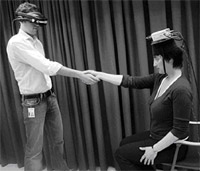 In full view of their own bodies, they still felt that Petkova's arm was their own and that when their hand was squeezed, the sensation seemed to come from Petkova's arm. The effect would be like seeing your reflection in the mirror, but feeling that you were behind the glass. "Your arm felt like it was my arm, and I was behind it", said one person. "I was shaking hands with myself!", exclaimed another.

Timing, however, was once again crucial. If the two partners took turns to squeeze each other's hand, the spell was broken. And again, a knife test demonstrated the illusion's strength, for the recruits reacted much more strongly when a knife was moved near the experimenter's wrist than their own! This full-blown body-swap experience was the most powerful demonstration of the power of the illusion, which Petkova and Ehrsson delightfully describe as "cognitively impregnable"- as long as a few simple conditions are met, it is very difficult to see through.

The study is more than cute trickery - it tells us that our sense of owning and being located inside our own bodies comes simply from experiencing a match between the signals from our senses, from a first-person perspective. It's certainly a different view to that espoused by textbooks, which suggest instead that our awareness of our own bodies comes from processing the accumulated signals from our muscles, joints and skin. The results also suggest that the signals from the various parts of our bodies are analysed together, rather than as isolated nodes. If that weren't so, it would be impossible to dupe people's perceptions of their entire bodies using signals directed at just the stomach or the hand, as Petkova and Ehrsson did.

NB. I love this paper, and it's very well-written. I did, however, inadvertently chuckle at this early sentence: "Consider a fight between two or more individuals. Survival depends on rapid identification and accurate localisation of one's own body." Well, yeah, sure, although I'd wager that rapid localisation of the opponent's body can't hurt either. Or for that matter, strength, speed, agility and possession or really big, sharp sticks.