The Psychological Tricks That Say, "Stay Away From My Seat" 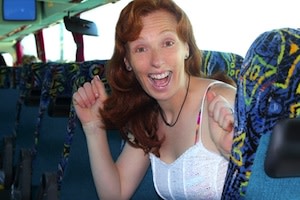 "If I pretend to be crazy, nobody will sit next to me!"

Boarding a bus can be a battle. First you have to fight through a line of other passengers, then struggle through a too-tiny aisle, and when you finally collapse into an empty row, the hard part is only beginning. Now you have to defend your extra seat from a horde of sweaty strangers. To learn more about the various tactics that people use to save the next-door seat, one brave sociologist went undercover. Over the course of two years, Yale University’s Esther Kim rode Greyhound buses for thousands of miles---including trips that took days---while observing and sometimes interviewing her fellow commuters. And some of her findings

were...pretty obvious. In the fight to preserve some personal space, people have many tactics: fill the empty seat with luggage, use plugged-in headphones or a phony nap to become temporarily deaf, toss down a coat to save the spot for an imaginary friend, or even break out what Kim calls the “hate stare.” But as soon as the driver announces that the bus will be full, everyone stops avoiding eye contact and starts looking frantically for someone normal to fill the empty space. According to Kim, the most important quality riders look for in a seat-mate is not race or gender, but merely someone who won’t be crazy or smelly. As Kim stated in a press release

, “The objective is just ‘getting through the ride.’”

Image of bus traveller via Shutterstock