The Power of Conscious Intention Proven At Last?

A neuroscience paper published before Christmas draw my eye with the expansive title: "

How Thoughts Give Rise to Action"

Subtitled "Conscious Motor Intention Increases the Excitability of Target-Specific Motor Circuits", the article's abstract was no less bold, concluding that:

These results indicate that conscious intentions govern motor function... until today, it was unclear whether conscious motor intention exists prior to movement, or whether the brain constructs such an intention after movement initiation.

The authors, Zschorlich and Köhling of the University of Rostock, Germany, are weighing into a long-standing debate in philosophy, psychology, and neuroscience, concerning the role of consciousness in controlling our actions.To simplify, one school of thought holds that (at least some of the time), our intentions or plans control our actions. Many people would say that this is what common sense teaches us as well. But there's an alternative view, in which our consciously-experienced intentions are not causes of our actions but are actually products of them, being generated after the action has already begun. This view is certainly counterintuitive, and many find it disturbing as it seems to undermine 'free will'. That's the background. Zschorlich and

Köhling say that they've demonstrated that conscious intentions do exist, prior to motor actions, and that these intentions are accompanied by particular changes in brain activity. They claim to have done this using transcranial magnetic stimulation (TMS), a way of causing a localized modulation of brain electrical activity.

motor cortex can cause muscle twitches, because this part of the brain controls our muscles

. In 14 healthy volunteers, Zschorlich and

Köhling aimed TMS at the area responsible for controlling movements of the left arm. Importantly, they adjusted the strength of the pulse so that it was only just strong enough to cause a tiny twitch (as measured using electrodes over the muscles of the left wrist themselves).

Remarkably, however, they found that if people were 'consciously intending' to flex their wrist, the same weak TMS pulse prompted a strong flexion response. Whereas if the volunteer was intending to extend their wrist, the very same pulse caused an extension movement. Here's an example from one representative subject, showing the differences in muscle activity in the flexing (FCR) and extending (ECR) muscles of the wrist following the TMS pulses:

The authors hypothesize that the brain's 'intention network' prepares desired actions by increasing the excitability of the cells in the motor cortex that can produce the movement intended. On this view, a weak TMS pulse provides just enough extra activation to trigger those pre-excited cells into firing, while being too weak to activate cells that govern other movements. 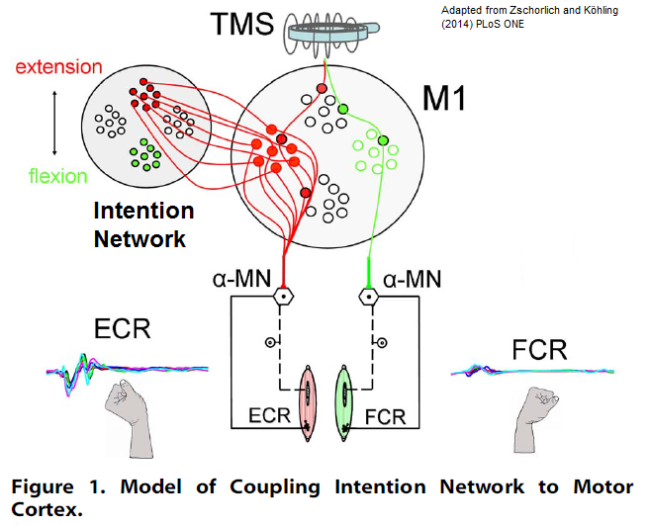 It's an interesting model and these are striking results, from a beautifully simple experiment. My only concern is that it might be too simple. There was no control condition for the TMS: every TMS pulse was real. It would have been better to have used a control, either a 'sham' pulse, or a real TMS pulse over a different part of the brain. I say that because - unless I'm missing something here - we don't actually know that the TMS pulse was triggering the wrist movements. The volunteers got to trigger the TMS themselves:

Volunteers were asked to develop an intention [...] and to trigger the TMS with the right index finger if the urge to move was greatest before any overt motor output at the wrist.

As far as I can see, volunteers could simply have been pressing the TMS button and then moving their wrist of their own accord. Ironically, they might not have consciously intended to do this; they might have really believed that their movements were being externally triggered (by the TMS) even though they themselves were generating them. This can happen: it's called the ideomotor phenomenon, and is probably the explanation for why people believe in 'dowsing' amongst other things. All we know for sure, as I understand it, is that 1. their right hand pushed a button, 2. TMS happened, and 3. their left wrist moved. We don't know that 2 caused 3. A control TMS condition would have allowed us to know whether the TMS was really involved - and, perhaps, whether conscious intention or unconscious ideomotor acts were governing those errant wrists.