A thought-provoking new paper from Oxford neuroscientists Stephen Smith and colleagues reports a correlation between a certain pattern of brain activity and, well, a great many things. The researchers took 461 resting state fMRI scans from the open Human Connectome Project (HCP) database. Associated with each scan is a set of 'meta-data' about the volunteer who had the scan. These 158 variables (listed here) cover everything from age and gender, to mental health status, income, and 'times used tobacco today'. Using the technique of Canonical Correlation Analysis (CCA), Smith et al. discovered that many of the meta-data variables were correlated with each other. In fact, there seemed to be a single axis (or factor) underlying the different measures. This axis was essentially "good vs. bad". So, for instance, performing well on intelligence tests, having a high income, and 'life satisfaction' were correlated with each other, while these were negatively correlated with "bad" things such as currently smoking, self-reported anger problems, and 'testing positive for THC' (cannabis). In other words, poor, unhappy, chain smokers tend to score poorly on IQ tests, and vice versa. You might call this the "It never rains but it pours" principle. Having established this rather depressing (if unsurprising) fact, Smith et al. then found that the 'positive-negative' axis has neural correlates in the fMRI data. Specifically, people with "good" characteristics tended to show more resting state connectivity between most brain areas (see below, red), especially in the default mode network (DMN). "Bad" brains had less connectivity overall, but in a few pathways they had more (blue). 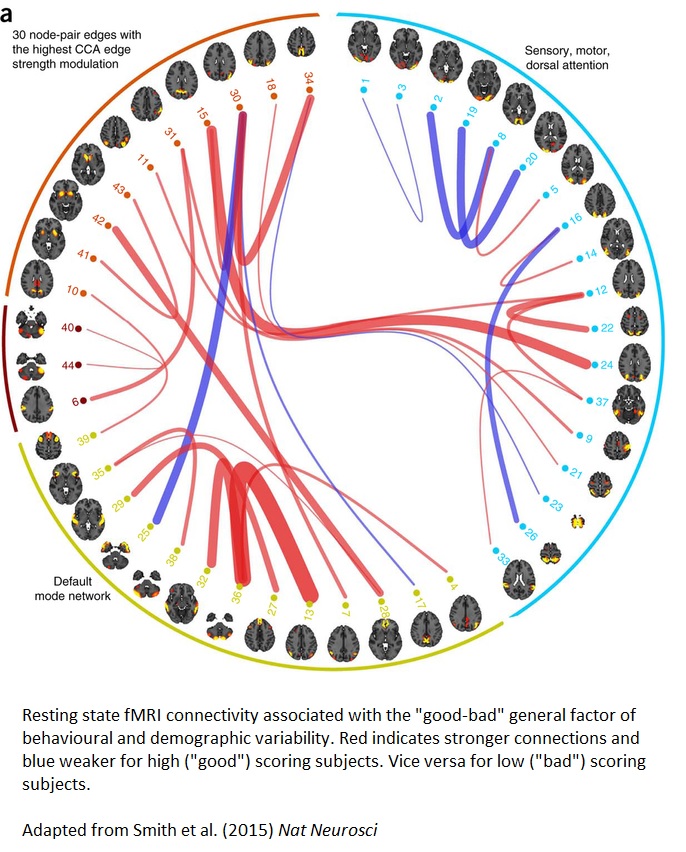 So what does this mean? What is cause and what is effect? The authors refrain from speculation on this question: "These analyses were driven by and report only correlations; inferring and interpreting the (presumably complex and diverse) causalities remains a challenging issue for the future." Nonetheless, I wonder if the answer might be rather straightforward. Recall that during the resting state scan, the "good" subjects had stronger activity in the DMN. Now this network is activated when people are, well, resting - it's activated by "default" when we're not doing anything else. So maybe the "good" volunteers were just better at resting? Or to put it another way, maybe the "bad" subjects were less able to relax? They had more to worry about in their lives after all. I also wonder if the "good" subjects were more relaxed because the MRI scanner was a more familiar environment - maybe they tended to be neuroscientists, students and other regular participants in MRI studies? Maybe the "good" subjects were bored while the "bad" ones were excited by a novel experience? Smith et al. performed a formidable array of artifact reduction approaches to try to exclude the possibility that confounds such as head motion influenced their analysis. However, you can't control for what you never measured, and as far as I can see the HCP meta-data has no variables for "number of MRI scans in lifetime" or for "emotional state during the scan." Either way, this is a very cool paper and, I think, has important implications for other studies. These results are a reminder that human behavioural traits never exist in isolation - they are correlated with each other. But as a researcher it is easy to forget this. So for instance, I might run a study looking at correlations between tobacco smoking and brain connectivity. But tobacco smoking is correlated with all kinds of other things. So any neural correlates of smoking might not be correlates of smoking per se but rather correlates of (say) IQ, or income, or the "good/bad" axis as a whole. Yet I might not realise this, and publish my results as being about "tobacco" (or whatever else.)