Researchers create what may be the perfect scout: a bug controlled remotely through a chip implanted in its optic lobes and flight muscles. 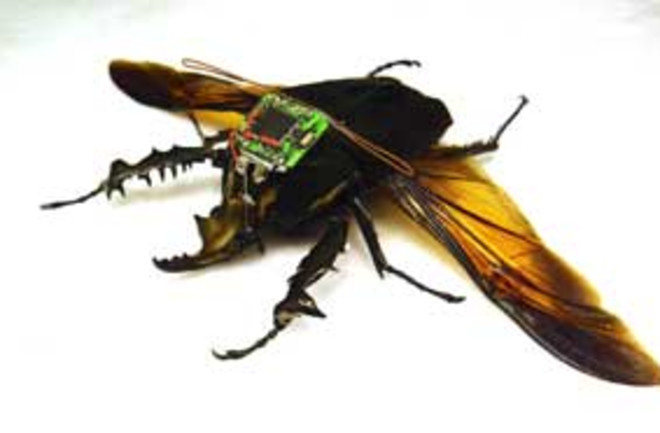 The first wireless flying-insect cyborg—a remote-controlled beetle—has been developed by engineers at the University of California at Berkeley. The six-legged biomechanical hybrid can rise, hover, and fly on command, guided by a radio receiver that relays signals to electrodes connected to the insect’s optic lobes and flight muscles. Researchers demonstrated the beetle at the 2009 IEEE MEMS conference in Italy after showing off a preliminary version at the same conference in 2008.

With the mind of a machine and the nimble body of an insect, this bug-bot may be the perfect scout: inexpensive, expendable, and capable of surreptitious reconnaissance. The Berkeley researchers, led by Michael Maharbiz, note that beetles are strong enough to carry useful payloads, such as a miniature camera.

The Defense Advanced Research Projects Agency (DARPA), which funds this work, is also sponsoring research on ways to implant insects with machinery during early stages of their lives. Butterflies can fly thousands of miles without feeding; a cyborg version would be a good candidate for long-range missions. Perhaps caterpillars could be modified to grow into adults that look like regular butterflies but have embedded wires and electrodes, allowing humans to control their flight. Dragonflies, which can reach 45 miles per hour, might take on high-speed missions. And with a wingspan of almost 10 inches, the moth Thysania agrippa has caught DARPA’s attention as a miniature cargo ship.