The Obesity Bug, And Other News From Nerdland 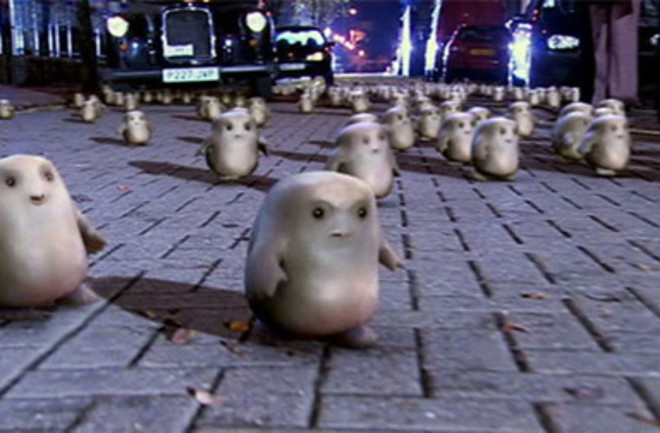 You know we're obsessed with weight loss when the problem pops up in our science fiction. I only just caught up with Series 4 Doctor Who, but the first episode featured Adipose, the drug that makes your fat "just walk away." In fact, they're being literal: The device Adipose is selling uses human fat to form an alien baby for the Adipose, an extraterrestrial species. Every night around 1 a.m., the fat pulls itself out of the person and walks out the door to the Adipose building. It's quite adorable really. The Doctor gets all huffy about it, since it's against space law to do such things against people's will, and the villain is ultimately thwarted. But afterward I couldn't help but wonder if maybe The Doctor was sitting a little stiffly on his high horse. As far as we can tell, Adipose represents a painless way to lose weight. Sure, it can be used to kill people, but it doesn't have to be. It's not inherent in the drug. I suspect Adipose would have a long line of customers even once full information was provided. Naturally, people have been looking for a pill to help them lose weight since more or less forever. But consider that in recent years, obesity has been described more and more frequently in terms of an epidemic, right down to epidemiological studies of how the problem is spreading. Now blogger Jennifer Gibson pulls together some of the research to argue that obesity may in fact be caused, at least in some people, by a virus called Ad-36.

Early research found that 30% of obese people were infected with Ad-36, while only 11% of non-obese people were infected. New research finds that Ad-36 has a direct effect on human fat stem cells. The virus infects the fatty tissue and increases replication, differentiation, and accumulation of fat cells. Ultimately, this leads to larger fat cells, and more of them. The virus also increases lipid sensitivity and decreases leptin secretion of the new fat cells.

She also says that sometimes people who know other people who gain weight rapidly can even catch the virus. She goes on to argue that the spread of obesity cannot entirely be explained by sociological factors like too much TV watching orpoor eating habits, that the existence of some kind of fat bug may go explain the speed with which the problem has progressed. If Gibson is right, then some people may be able to solve some of their weight problems with the application of an anti-viral, or some other treatment that attacks viruses. [Hat tip to io9] In other news from nerdland: • Want to build your own Death Star? Just pony up $15 septillion (15 followed by 24 zeroes). Rick Gold decided he had a few spare minutes to work out just how much the construction of the Death Star hurt the ole Imperial Budget. • A man robbed a pair 7-11 stores in the Denver area armed with a bat'leth, the traditional weapon of the Klingons. The dude himself may represent a new high for geekery, but I also enjoyed the sourcing required by ABC-7 Denver to explain the bat'leth to viewers: "The Startrek.com Web site describes the Klingon weapon as crescent-shaped and about a yard long." and then "Klingons were warlike enemies of the good-guy United Federation of Planets in the original "Star Trek" series but were allies in "Star Trek: The Next Generation." (Hat tip to everyone, but in my case Geekologie) • Scientists are getting so close to being able to implant drug delivery systems under the skin and control them via WiFi that other scientists are writing papers to express concern over security. I must admit, I'd hate to have my antibiotics hacked.