The Neural Basis of Watching "Memento"

Memento (2000) is a complex psychological thriller about a man unable to form long-term memories. The movie is popular among neuroscientists for its accurate depiction of amnesia. Now, in a wonderfully "meta" paper, a group of neuroscientists report that they scanned the brains of people watching Memento in order to study memory processes. The paper's called Brain mechanisms underlying cue-based memorizing during free viewing of movie Memento, and it's published in Neuroimage, from Finnish researchers Janne Kauttonen and colleagues. Kauttonen et al. showed n=13 adults the full version of Memento during fMRI scanning. The participants had never seen the movie before. The authors' focus was on 15 "key-events", distinctive scenes in the movie which are each shown twice. These key-events are key to understanding Memento because the movie is told out of the normal chronological order: when a key scene is shown for the second time, it helps the viewer to piece together the narrative. Specifically, Kauttonen et al. were interested in the neural correlates of seeing the second, "key-frame" presentation, following the first "cue-frame" viewing.

The authors hoped to find a pattern of neural activity distinct to seeing the second, key-frame showing of the repeated scenes.

We set forth to investigate the memory functions particularly related to cued recalling of previous events in order to make sense of the plot... we studied if the key-frames could be associated with specific BOLD activation patterns (fingerprint patterns) at the moments they were presented.

Indeed, the fMRI results showed a common pattern of key-frame response. Representational similarity analysis (RSA) revealed that activity in the precuneus, angular gyrus and right frontal gyrus was similar when seeing a key-frame, despite the fact that the 15 key-frames were very different in terms of low-level visual features (i.e. what happens on screen). The right hemisphere was especially involved. 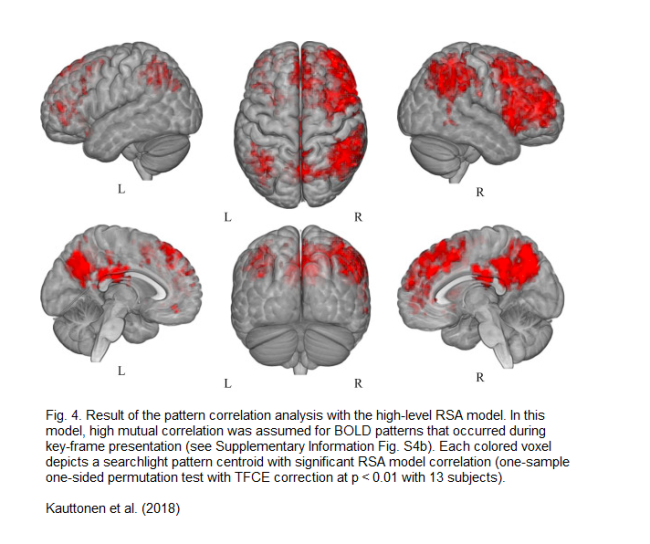 As a control condition, another n=14 adults saw an edited version of Memento in which all the scenes were placed in chronological order. These participants didn't show the same pattern of activity when viewing the key-scenes - although I note that the edited version only contained one presentation of each scene, not two, so it doesn't control for the fact that that in the original, some scenes were repeated. The authors also acknowledge this. Kauttonen et al. conclude that

A common neural process, or a set of simultaneous processes, is executed during key-frames... We were able to associate key-frames with a common “neural fingerprint” activity patterns. This network covered various frontal, higher-order parietal and subcortical regions, mainly precuneus, angular gyrus, cingulate gyrus and frontal pole with right hemispheric lateralization bias. We argue that the main process driving these regions was memory processing, especially cued recall, and followed by rapid reconstruction of narrative schema.

This is a lovely study using a naturalistic stimulus. It might be hard to extend this work to other stimuli, however, because there are not many movies that follow the Memento narrative structure. Perhaps someone will need to win a grant to commission Christopher Nolan to make a sequel?