The Neural Basis of Seeing God?

A remarkable case report describes the brain activity in a man at the moment that he underwent a revelatory experience. According to the authors, Israeli researchers Arzy and Schurr, the man was 46 years old. He was Jewish, but he had never been especially religious. His supernatural experience occured in hospital where he was undergoing tests to help treat his right temporal lobe epilepsy (TLE), a condition which he had suffered from for forty years. As part of the testing procedure, the patient stopped taking his anticonvulsant medication. Here's how the authors describe what happened:

While lying in bed, the patient abruptly "froze" and stared at the ceiling for several minutes, stating later that he felt that God was approaching him. He then started chanting prayers quietly, looked for his Kippa and put it on his head, chanting the prayers more excessively. Then, abruptly, he yelled "And you are Adonai (name of the Hebrew God) the Lord!", stating later that god had revealed to him, ordering him to bring redemption to the people of Israel. The patient then stood up, detached the EEG electrodes from his skin, and went around the department trying to convince people to follow him, stating that "God has sent me to you". When further questioned, he said that he does not have a concrete plan, but he is sure that God is going to instruct him what he and his followers should do on their way to redemption.

What makes this so interesting is that the patient was undergoing online EEG recording at the time of his unexpected messianic moment - right up until he ripped the electrodes off. Arzy and Schurr were therefore able to examine the neural correlates of the behaviour. It turns out that there was an increase in activity in the low-gamma band (30–40 Hz) localized to the left prefrontal cortex, which occured during the onset of the ineffable event: 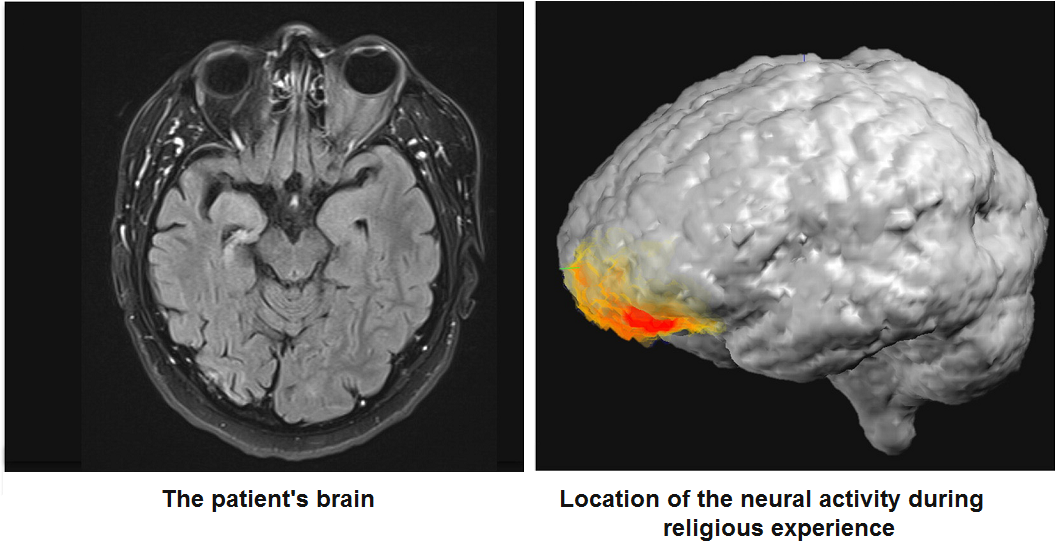 The authors conclude that the man suffered from "grandiose religious delusion of revelation and missionary zeal in the context of post-ictal psychosis (PIP)". PIP is a form of psychotic episode that can occur after epileptic seizures. As for the involvement of the prefrontal cortex in this PIP, Arzy and Schurr say that this region has been implicated in other forms of psychosis, but ultimately this remains a mystery: we don't know what happened here, or what triggered the abnormal activity in that particular region as opposed to others. (Also, the authors don't say how they controlled for muscle and eye EEG artifacts.) Still, I was struck by the patient's cry of "And you are the Lord!", which sounds like a Biblical prophetic utterance (I bet it sounds even better in Hebrew). Indeed the patient's experience of seeing God (or a messenger of God), being chosen, and tasked with spreading the word of redemption is reminescent of that of many religious figures, from Moses to Jesus to Mohammed. Of course, this doesn't mean that any of those leaders had epilepsy, but it is interesting that this phenomenology can occur in this disease.