The Myths About Mr. and Ms.

Men’s and women’s brains really are not the same, neuroscientist Lise Eliot argues—but most of those differences are learned, not inborn. 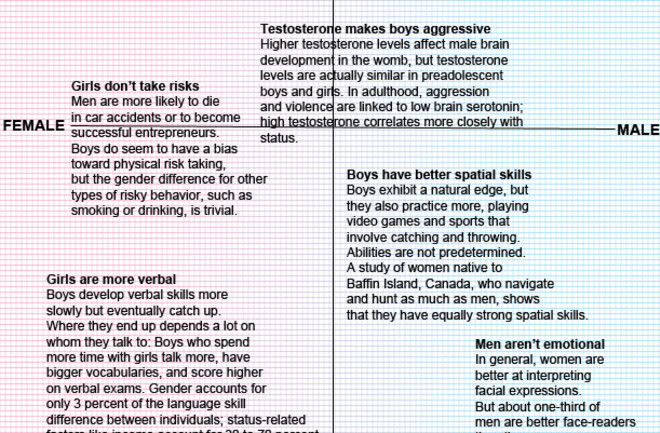 This article is a sample from DISCOVER's special issue on the brain.

Four years ago, when Lawrence Summers suggested that the scarcity of prominent female scientists and engineers was in part because there are fewer women on the extremes of the range of innate math ability—fewer geniuses and fewer duds—he stirred up a lot of misguided arguments about gender differences in the brain. Although the former president of Harvard University and current director of the National Economic Council may have been right on a few details, he was wrong on his major point.

Men’s and women’s brains are different, but those distinctions are much smaller than we typically think, and few of them are innate. Rather, the slight asymmetries present at birth, shaped and molded by interests, predilections, and the cues of parents and teachers, grow into more significant gender gaps in adulthood. This divergence is an example of plasticity, the brain’s marvelous ability to adapt and change. “Most differences in behavior develop through experience,” says neuroscientist Lise Eliot of Rosalind Franklin University of Medicine and Science in Chicago. “Nature sets the ball rolling, biasing boys and girls toward different interests, but the gaps themselves are largely due to learning and plasticity.”

In her new book, Pink Brain Blue Brain: How Small Differences Grow Into Troublesome Gaps and What We Can Do About It, Eliot dispels many myths about male and female brain development. “In parenting literature, there’s a lot of stuff that’s made up,” she says. When the toddler son of peaceniks pines for a toy army truck, she argues, he is expressing an inborn tendency toward active, physical play that has been shaped by social influences, not by the effects of a “gun gene” on the Y chromosome. Until about 1 year of age, boys and girls are equally drawn to dolls; it is only later, when boys become more active, that they strongly prefer balls and cars. Parents also play a role in shaping their children’s interests, often in ways that they may not be fully aware of.

The negative impact of these myths is predictable and yet distressingly persistent. Told that girls typically struggle with math, promising young female students might be discouraged from pursuing careers in science or engineering. Naturally creative or empathetic boys may stifle these impulses and miss out on a calling as an artist or social worker. Eliot advocates a return to the attitudes of the 1970s, when parents were more attuned to the way social influences shape children’s behavior and performance.

Isn’t it empirically true that boys are generally better at math? There are certain areas of math involving spatial skills that males definitely perform better at. Even in infancy, boys do a little better at visual mental rotation. But we need to appreciate how much this ability is enhanced through play like sports, building toys, and video games. When it comes to other aspects of math—addition, subtraction—girls actually have an advantage. They do slightly better. So you can’t generalize about all math abilities.

Why do many boys love guns and girls love dolls, without parental encouragement? Gender identity is a strong im­-pulse. Children figure out their gender in the second year, typically around 18 to 24 months. This knowledge helps them decide which toys and clothes are appropriate. Differences in activity levels, social sensitivity, awareness of other people—these become magnified once a child figures out which gender she or he belongs to.

What about empathy? Is that something kids are born with? Children have to learn emotion. Certain emotions are hardwired, but reading the feelings of other people requires tremendous social experience. The whole goal of therapies in autism is to train autistic children to be aware of the emotions of others.

Are the gender lines changing? We’ve had a revolution in getting girls involved in sports. That’s been beneficial because it probably improves spatial skills. The surge of girls’ athletics seems to coincide with girls’ growing enrollment in advanced science and math classes. I speculate that it has made girls more comfortable with workplace competition, but I can’t say this has been proved. You haven’t seen a parallel opening up for boys. You are getting a lot of girls in advanced math and advanced science classes, but the boys are not moving into areas like foreign language and art.