The Myth of Human Adult Neurogenesis?

In a new paper that could prove explosive, Australian neuropathologists C. V. Dennis and colleagues report that they found very little evidence for adult neurogenesis in humans. In recent years, the idea that neurogenesis - the production of new neurons - occurs in specific regions of the adult brain has become widely accepted, and much discussed. Disruptions to neurogenesis have been proposed to play a role in stress, depression, and other disorders. However, Dennis et al. say that neurogenesis in adults occurs at such a low level as to be "functionally insignificant". They examined 23 preserved human brains taken from individuals who had died at ages ranging from 0.2 years up to 59 years. The authors focussed on two regions, the subventricular zone (SVZ), and the subgranular zone (SGZ) of the hippocampus; these are the two main areas where adult neurogenesis has been reported. To test for markers of ongoing neurogenesis, Dennis et al. used antibodies to selectively mark three proteins: Ki67, PCNA, and doublecortin. The first two are markers of proliferating cells, while the third is specific to immature neurons. The results showed that, in the SVZ, Ki67+ and PCNA+ cells were present at all ages, showing that some kind of cells were proliferating (albeit the number of proliferating cells declined with age). However, crucially, doublecortin+ cells were only present in children; they were not found in any individuals over the age of 16, suggesting that the generation of new neurons had ceased. 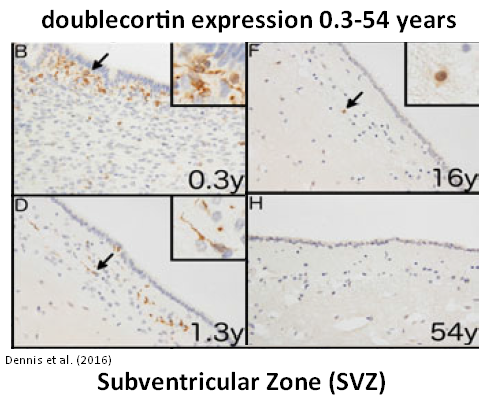 The situation was similar in the SGZ: Ki67+ and doublecortin+ cells were very common in children but were usually absent in adults (found in only 3 out of 8 adult brains). The authors conclude that

A combination of Ki67 and doublecortin immunoreactivity demonstrates that in humans, the density of proliferating cells, and neuroblasts in particular, declines markedly with age in the SVZ and SGZ and by four years of age is no greater than in the adjacent parenchyma... this low level of neurogenesis in neurologically normal adult humans suggests that any further reduction is unlikely to significantly contribute to the pathogenesis of neurodegenerative diseases.

What about the famous 2013 study by Kirsty L Spalding and colleagues which did report evidence for adult human hippocampal neurogenesis, using a different method? Dennis et al. say that the two sets of results are actually compatible. Spalding et al. estimated a rate of neurogenesis of 700 new neurons per day in adults. This rate, Dennis et al. say, is consistent with the low levels of doublecortin+ cells they counted in the SGZ (in the 3/8 adults who had any).

So it's fair to say that Dennis et al. don't quite rule out all neurogenesis in adults. However, the authors say that if human adult neurogenesis takes place, it does so at an extremely low rate: relatively speaking, it's about 10 times lower than the rate seen in adult rodents.

The marked differences between infants and adults in the current study suggests that in humans, the decline in neurogenesis with age is more rapid than in other mammals and that in adults, neurogenesis is functionally insignificant.