The Mystical Mathematics of Rock and Roll 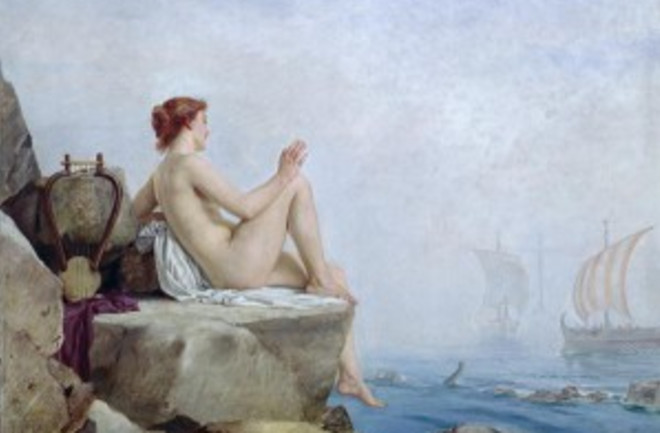 "The Siren," Edward Armitage, 1888. Wikimedia Commons Anyone who has wondered about the mysterious way numbers seem to be woven through the universe will eventually be led to a famous essay by the physicist Eugene Wigner, The Unreasonable Effectiveness of Mathematics in the Natural Sciences. Why, Wigner asked, are the laws scientists discover so readily expressed in terms of mathematical constants like π and in precise numerical equations? Wigner isn't really able to answer the question, and pondering it leads down a rabbit hole of other mysteries: Is mathematics invented or discovered? And why is the music that sounds so harmonious to our ears based on simple mathematical proportions? According to legend it was Pythagoras and his mystical cult of number worshippers who first glimpsed the musical connection while plucking the lengths of strings. Tune a string so it plays the note A above middle C, or 440 cycles per second. A string half that length will play the same note an octave higher -- 880 cycles per second, and so forth. Other simple ratios will give you the fundamental notes of a chord. A string 3/4 as long plays a D (called the fourth or subdominant), and 2/3 gives you an E (the dominant fifth). The I-IV-V chord progression is the basis for almost all popular music. Pythagoras is the father of rock and roll. There are quarter-tone musical scales in Middle Eastern civilization, and dissonances are savored by avant-garde Western composers. But it is the music rooted in the Pythagorean tradition that has come to dominate the world. There seems to be something fundamental connecting its simple mathematics and the architecture of the brain. Of course McDonald's restaurants are also sweeping the planet, and a recent post by British science writer Philip Ball on the BBC website suggests the jarring possibility that harmony may be something that is learned, not innate. Maybe Pythagoras discovered a system of notes that comported to exact mathematical proportions and then, over the centuries, it was drilled so deeply into our heads that we learned to love it, whether in the intricate renditions of Mozart or the stripped-down simplicity of the Rolling Stones. The occasion for the BBC post was a new paper in the Journal of Experimental Psychology: Consonance and Pitch. After describing their experiments at the University of Melbourne, Neil McLachlan and his team conclude that "harmony results from the adaptation of sensory systems to reproducible and recognizable stimuli, regardless of their physical properties." If harmony is an acquired taste, the authors propose, that may explain "the diversity of music tunings that do not conform to simple mathematical proportions that have emerged in isolated societies all over the world." Pianos, in fact, are not tuned precisely by Pythagorean ratios. To be capable of playing harmonious music in all keys, compromises must be made according to a system called equal temperament tuning. If A is 440 cycles per second then E should be 330. Instead it is 329.628. Nothing seems very elegant about that. I'm finding it hard to shake the feeling that there must be some profound neurological-cosmological connection rooted in mathematics. But now I'm starting to wonder. Could that belief be just so much numerological mysticism? The Pythagoreans believed all kinds of weird things. They were fascinated that the numbers in the musical ratios -- the tetraktys, 1, 2, 3, 4 -- add up to 10. That was supposed to be the perfect number. It was connected, they believed, with the Oracle at Delphi -- and with the seductive song of the Sirens.