The Mystery of "Quantum Resonance Spectroscopy"

Can quantum physics help to diagnose schizophrenia and depression? A paper just published in the Journal of Nervous and Mental Disease claims that a technique called 'quantum resonance spectroscopy' (QRS) can accurately diagnose various mental health problems. But is it quantum wizardry or magic quackery? According to the authors of the new paper, Zhang et al from Xi'an in China, QRS was able to measure symptoms like anxiety, irritability, depression, and psychosis. In a large sample of patients, the accuracy was high: compared to psychiatrist's ratings of the patients symptoms, QRS agreed with kappa correlation values of over 0.65. That's an impressive performance, given that two psychiatrists rarely agree about a patient's diagnosis as well as that. So what is QRS? Well, I didn't know anything about it before I read this paper... and I still don't. The paper provides few details. About the only thing it gives us is a picture of a QRS machine: 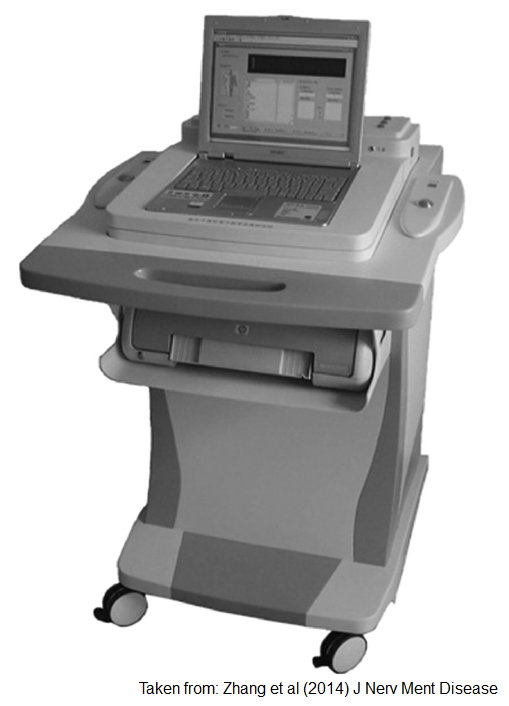 So that's what it looks like, but what does it do? Zhang et al introduce the method thus:

The human body is an aggregate of cells, which continuously grow, split, regenerate, and die. In the process of cellular split-up and renewal, the charged bodies of nucleus and extranuclear electrons as the basis unit of a cell are moving and changing ceaselessly at a high speed as well, emitting electromagnetic waves... different signals of electromagnetic waves will be emitted by the conditions of goodhealth, subhealth, diseases, and others...

So electromagnetic waves emitted by cells are involved, but nowhere is it explained how the QRS machine detects these electromagnetic waves; what frequency these waves are; how sensitive the detector is; how it was calibrated; how the waves of interest are distinguished from background noise; how the signal is processed to give a final result; etc. Here is all of the text from the Methods section dealing with QRS:

For this study, we explored and developed a biological wave sensing device, a QRS (TJQ-D; Chongqing, People’s Republic of China; Fig. 1), in psychiatric examination. It comprised a biological wave detection unit, a biological operation control unit, a power, and a follower, wherein a contact of the biological operation control unit is connected to an input end of the follower, and the other contact is connected to a cathode of the power. The biological wave detection unit is made of conductors and connected to the cathode of the power or the input end of the follower. This system automatically recorded the special biological wave and could effectively transform message into electrical signals, which can be dealt by computers, to get resonance score. The subject sat on a chair and was freely holding the sensor in his/her hand. The special biological wave of the subject was collected and transformed electrical signals compared with computer control data. Then, the resonance score was obtained by computer (Fig. 1). Measurement and analysis released by the brain were obtained through the size of the vibration frequency (weak magnetic field fluctuations in energy) to determine whether there are psychiatric symptoms. Scores of -6 or less were considered as normal; -7, mildly abnormal; -8, moderately abnormal; and -9 or greater, severely abnormal; size of the vibration frequency was compared with equipment standards set by the magnetic field to distinguish between normal and abnormal on affective disorders.

The paper simply doesn't tell us how the data were obtained. We know only that - the patients held some kind of electromagnetic sensor in their hand, and that the signal was processed somehow to give a score from -6 to -9. That's not science. To find out more about QRS, I did some background reading. In 2012, following the Fukushima disaster, the Wall Street Journal reported that a Japanese company claimed that QRS could detect radiation, a claim denounced as quackery. The founder of this company reportedly said that the idea behind QRS goes back over 100 years, to Albert Abrams. If true, this is quite an admission. Abrams was an American 'inventor' who claimed to be able to diagnose almost any disease using radio waves. His devices sold well, but he was discredited after he was sent a blood sample from a healthy rooster and diagnosed it with syphilis and cancer. I don't think Abrams used the word "quantum", though. Perhaps that reflects a modern rebranding. I also found this page discussing the potential of QRS to allow the modernization of traditional Chinese medicine. We're told that QRS has been used to detect the electromagnetic signature of yin, yang and the various meridians (pathways of qi, life energy). So QRS is a mystery - but there's an even bigger one: how did this article get published in the Journal of Nervous and Mental Disease? This is a respected psychiatry journal with a long history. The JNMD's author instructions are clear that articles ought to include sufficient methodological details:

A precise description of subjects, procedures, apparatus, and methods of data analysis, all sufficiently detailed to allow other competent researchers to evaluate or replicate the study.

Can anyone claim that this paper meets that standard? The peer reviewers and the editor seem to have thought so, but how can they say that with a straight face? Do any readers have any idea what the story here might be?