The Most Powerful Carcinogen Is Entropy

I was at science writers’ summer camp last week (I'll probably write more about that later) when Razib Khan, on his blog Gene Expressions, wrote about my forthcoming book, The Cancer Chronicles: Unlocking Medicine’s Deepest Mystery. It’s a thoughtful post, and I was particularly struck by his observations about cause and effect -- how the human mind demands reasons, preferably simple ones, even when none may exist. That is one of the obsessions behind Fire in the Mind (the book and the blog), and it carries over to The Cancer Chronicles. When we or someone we love gets cancer, we agonize over the reasons. Was there something we did wrong or that was done to us? When we hear about strangers who are stricken, we want to believe that they ate too much junk food or lived in a particularly polluted atmosphere -- mistakes we personally can avoid. But more often than not there is no identifiable cause. In chapter 3 of the book, "The Consolations of Anthropology" (it is excerpted this month in Discover), I describe evidence from the fossil record showing that cancer has been part of life since the beginnings of humankind (and long before -- my first chapter is about a dinosaur with a metastatic bone tumor). That in itself is not surprising. There are a hundred trillion cells in a human body. During any one second, several million of them are dividing. With each division, the entire genome is copied and passed along to the daughter cells -- which go on to divide and pass the information to the next generation. And the next, and so on down the line. Only a believer in a perfect creation could believe that errors do not happen along the way. In fact they occur with each division. Most are either harmless or they kill the cell outright. Others are caught by the genetic safeguards that have evolved over the millennia to recognize and remove damaged cells. But mistakes still get through -- as they must, for without genetic mutations life would not evolve. Cancer happens because some of those mutations, in the right combination, can cause a lineage of cells to start expanding and evolving on its own, independent of the welfare of the body. It burgeons into a tumor, and as it grows it acquires -- through random variation and selection -- the traits it needs to survive, expand, and colonize the body. It becomes a quasi-creature driven by the Darwinian dictate to become fitter and fitter. To be fruitful and multiply. Cancer and life itself are both the result of mutations. Most of these appear to be spontaneous -- the result of entropy -- while others can be traced to carcinogens: natural ones like sunlight and manufactured ones like the estimated 80,000 substances that have been introduced over the decades by the chemical industry. Most of these, by far, have not been tested for carcinogenicity, and regulation has been lax. Yet decades of epidemiological studies indicate that -- except for the carcinogens in cigarette smoke -- synthetic chemicals, including food additives, are not a major contributor to the overall cancer rate. However toxic a substance may be, the amount of exposure received by the general population is very dilute. Each year, as more novel substances have been unleashed into the world, the overall cancer rate has remained steady and, for the last two decades, has been declining. In the United States, only two residential cancer clusters have been identified and associated with pollutants. But as I’ve written elsewhere, even these are far from clearcut and they involve a handful of cancer cases. None of this means that dumping toxic waste is not a crime against the earth and its creatures or that the transgressors should not be prosecuted. Every effort should be made to reduce potential toxins. (I'm belaboring these points because I know how easy it is to be misunderstood.) But in seeking out the essence of cancer, scientists have had to cast a much wider net. In my book I describe a landmark study -- "The Causes of Cancer" by Richard Doll and Richard Peto -- which concluded that “most of the types of cancer that are common today in the United States must be due mainly to factors that have been present for a long time.” The big exception was lung cancer caused by cigarettes. Over the years, followup studies have reached much the same conclusion. Here is a chart, from a 2012 report by the American Association of Cancer Research, that breaks down the causes by percentages: 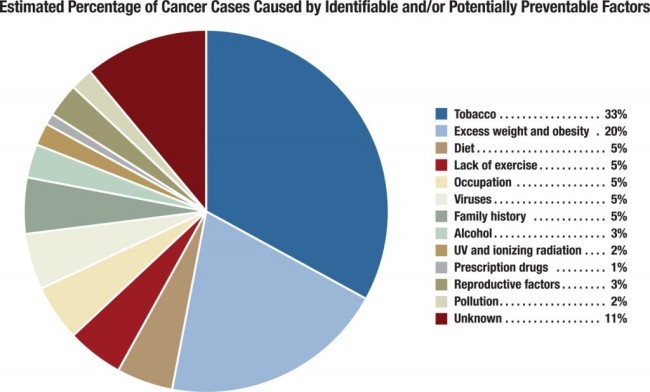 From the AACR Cancer Progress Report 2012. All charts like this oversimplify. Any individual case of cancer involves multiple factors. Chain smokers tend not to exercise much -- and you can smoke all your life without getting lung cancer. It takes multiple mutations for a cell to become malignant, and each mutation might have a different trigger. Some mutations will be inherited -- these are involved in 5 to 10 percent of cancer cases -- but most will be the result of random copying errors. I find myself reacting to that realization in conflicting ways. Here is how I put it in the book:

There is something comforting about knowing that cancer has always been with us, that it is not all our fault, that you can take every precaution and still something in the genetic coils can become unsprung. . . . But there is also comfort in believing that humans, through their own devices, have increased the likelihood of cancer. What free-willed creatures have created can conceivably be undone. Failing that, there is at least a culprit to blame.