The Most Dangerous Idea in the World 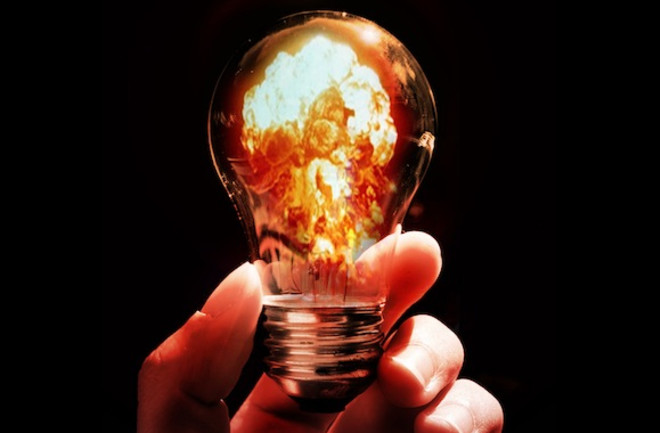 To think scientifically is to think dangerously. Scientists, from Copernicus to Galileo to Darwin, are among the many "Great spirits [who] have often encountered violent opposition from weak minds," as Einstein so eloquently put it. Daniel Dennett, a prominent New Atheist and philosopher of science, aptly named one of his tomes on evolution Darwin's Dangerous Idea. Constantly challenging the status quo, science is the engine of the future. Science generates the ideas and science fiction gives us whole universes in which to explore them. Science fiction classics like Brave New World, Nineteen Eighty-four, Slaughterhouse-Five, and A Wrinkle in Time are oft challenged on the premise that they are dangerous or harmful to the impressionable minds reading them. So science and sci-fi push the envelope, but among all of the guesses, theories, and what-ifs, is there an idea most dangerous? This August, Big Think tried to answer the question with their "Month of Thinking Dangerously." Max Miller did his best to offend his loyal readers, investigating ideas that are an affront to the common perspective - disband NATO? Control the weather? Cut special-ed? Max! for shame! Though many of the dangerous ideas were political, the preponderance of topics trended towards science of the future: eugenics, space colonization, selling organs, memory erasing, synthetic biology, and drug legalization, to name a few. As such, I was expecting one topic in particular to cap the list at the end of the month. Instead, the editors of Big Think invited their readers to "propose your own dangerous idea." So I thought, and considered, and pondered, and then remembered that the idea I’ve spent the past two years obsessing over always manages to raise ire and eyebrows. Thus, Big Think, I submit to you the most dangerous idea in the world: Allow and Encourage Transhumanism, i.e. Human Enhancement Through Technology Transhumanism is, at its artificial heart, a simple idea: humans should not be limited by our biology. We forget things, we are irrational, we are vulnerable, we get sick, we age, we die. But we don't have to do or be any of those things. Science and technology from every branch and every direction is slowly chipping away at each of these problems. Each tiny step aggregates and converges towards a world in which humans are free to live as long as they want, to love and reproduce with whomever and however they choose, to be as smart, as strong, and as happy as possible. The suffering and death that accompany much of our very existence (and perhaps give it meaning) would be reduced and, maybe, just maybe, eliminated. Human nature would be fundamentally altered; which is why Francis Fukuyama has called transhumanism the "Most Dangerous Idea in the World." I agree, and that danger, that essential threat to what we are, is why I believe we should, nay must, promote human enhancement. To do so, we must raze human nature itself. Philosophy and religion have spent the past 10,000 years working to make virtues of the necessities of biological life; primal urges, emotional outbursts, problems of procreation, suffering, disease, and death are explained away as essential elements of humanity. But these ideas do not create the meaning and value in human nature. Instead it is human nature that has invested these terrors of the flesh with worth to make existence bearable. Consider a war hero. In a brutal, hopeless battle, a single soldier rushes into danger, risking her life and limb to rescue a fallen member of her team. She returns with her comrade safely and is heralded, rightly, as courageous and moral. But none would argue that it was the war that made her courageous and moral, or, worse, that we should fight perpetual wars to give everyone an opportunity to exemplify their virtue. Yet that is precisely the logic that drives arguments like “death gives life meaning” and “suffering makes us value the good times.” These statements are backwards. We find life meaningful in spite of, not because of, suffering, disease, and death. If they were to be eliminated, life would not merely still have meaning but it would mean significantly more. Transhumanism, more than any idea in the world today, threatens our very way of being. It asks us to release the last vestige of religion, the last bastion of superstition and bias--that is, transhumanism asks us to reject the delusion that our biology defines us, that our failings are our successes, that human nature is anything but change itself. The reason we must enhance is that our biology is out of sync with our extended phenotype. Human nature is at a crossroads. Either we embrace the fact that we are a species born of and wedded to technology, or we continue to limp along, terrified of our own central drive to change. As more and more studies emerge linking the evolution of the genus Homo to tool use, fire, cooking, climate shift, and migration we are realizing that humans didn’t adapt to anyone environment or condition but are something far more unique. Human beings have been evolutionarily selected to be adept at dealing with change itself. Every major revolution in human history, from the discovery of fire to the agricultural revolution to the rise of the digital age the human mind has shown its unparalleled plasticity. We are a species that has evolved to evolve beyond biology. It is time for us to embody that ability. UPDATE: Gimme your best shots, ye mighty commenters. I'm working on a follow up piece: the better your critiques, the better my response will be.